Against Red China and the Neoliberal Globalists — But I Repeat Myself 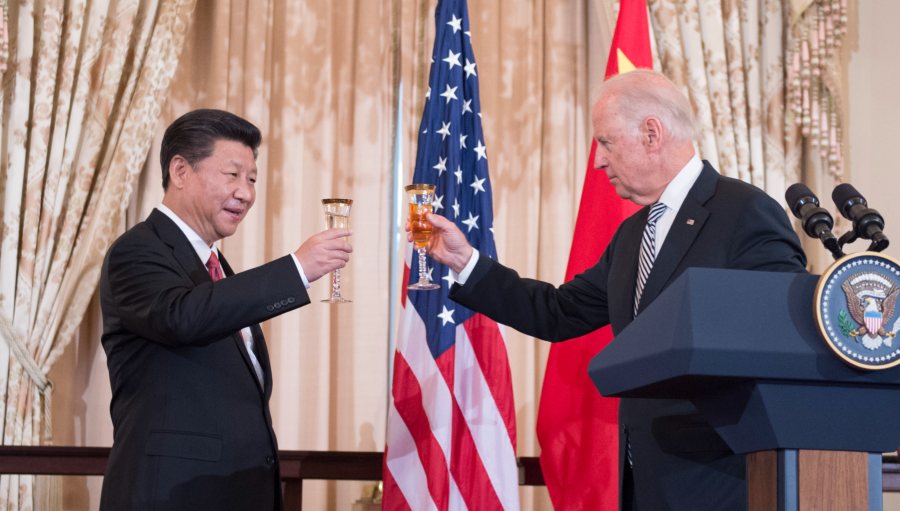 I’ve spent the last two decades advocating for the victims of the Chinese Communist Party. Recently, my organization, the Vulnerable People Project, pressured our elites in the West to send a message to China by boycotting the Beijing Olympics. But they didn’t budge – and instead fully participated in the event, celebrating it and granting it legitimacy.

When you’re facing such an unmistakably evil regime – which currently holds millions of innocent Muslim minorities in concentration camps and keeps millions of other dissident voices in an iron grip – it’s disorienting and discouraging to find that our elites in the West are apathetic to the victims.

An Epiphany of Evil

But God works in mysterious ways, and this week I realized that His providence is giving us just what we need: A newly clarified vision.

It came to me as I considered the events of the past week or so in the West. It’s revealing to ask: How are the following actions of our elites ideologically different from the policies of CCP?

About a week ago, Joe Biden’s Department of Homeland Security (DHS) published a new national terrorism advisory that stated federal agents will now monitor and investigate citizens who share “misinformation” about the controversial (and unmistakably corrupt) Big-Pharma-U.S.-Government vaccine rollout.

The kicker: “These threat actors seek to exacerbate societal friction to sow discord and undermine public trust in government institutions to encourage unrest, which could potentially inspire acts of violence.” The document said essentially the same about people who publicly discuss election fraud.

In other words, our federal government openly announced that it has abandoned the most basic understanding of constitutional rights – which shield innocent citizens from surveillance and prosecution. It will now begin persecuting people who have not committed crimes. Why? Because they are “undermining public trust in government institutions” and could “potentially inspire” crimes.

Now this isn’t unique. In fact, it’s what we should expect from a modern superpower technostate once it rejects God and the Christian-inspired Western vision of the human person. And of course, significantly, it’s precisely what the atheistic regime in China does to its people.

Canadian Prime Minister Justin Trudeau said last week that he had just spoken with President Joe Biden on the phone. The two leaders agreed on one fundamental principle: Both American and Canadian citizens should be held accountable for donating money to nonviolent working class demonstrators against Canada’s COVID-19 mandates.

As of today, a bank or other financial service provider will be able to immediately freeze or suspend an account without a court order. In doing so, they will be protected against civil liability for actions taken in good faith. Federal government institutions will have a new broad authority to share relevant information with banks and other financial service providers to ensure that we can all work together to put a stop to the funding of these illegal blockades.

As one commentator pointed out, this is the beginning in the West of the “depersoning” that China has been doing against dissidents for years. It is what the Chinese regime calls “State Capitalism,” an arrangement by which the most financially powerful “private” institutions work seamlessly with the centralized government to erase the influence of all ideological dissidents – effectively rendering them non-persons.

And no wonder. Trudeau is a member of the Western ruling class. So if you’re beginning to see the pattern I’m pointing out, you won’t be surprised to hear that he once explicitly said he admired China, specifically for its dictatorship. “There’s a level of admiration I actually have for China, because their basic dictatorship is allowing them to actually turn their economy around on a dime and say ‘we need to go greenest fastest, we need to start investing in solar,’” he said. “I mean there is a flexibility … of having a dictatorship … that I find quite interesting.”

It’s also important to note that Prime Minister Trudeau made his big move this week just after getting off the phone with an agreeable President Biden. In the United States, elites could potentially bring about the same “depersoning” State Capitalism apparatus. Already our top five financial institutions are connected at the hip with the Federal Reserve, which grants their charters and makes a point of allowing the biggest banks to operate at the lowest capital ratios, driving consolidation and creating too-big-to-fail financial giants.

We Didn’t Convert China. It Perverted Us

When the United States first embraced China, apologists promised that our nation would influence them, and liberalize their politics. Instead, our relationship with China has enriched our zoom-meeting class, hollowed out our manufacturing centers, and polluted our politics. Now both countries have state-sponsored capitalism. Ours is more indirect – for now – and theirs more successful strategically, politically, and arguably even economically.

Meanwhile, the most powerful members of Western society have positioned themselves as servants of the globalist monostate, rather than as representatives and advocates for their neighbors. Like Chinese communist true-believers, these neoliberal globalists have no humane connection to their own communities and nations.

Never mind that these are citizens of a constitutionally representative political order who have been threatened with destitution and are peacefully appealing to their own elected officials. Down with the dissidents.

Kayyem would likely find she has a lot in common with another of our own who rose to elite status. The California-born, Stanford-educated Eileen Gu renounced her American citizenship in order to compete for China in the Beijing Olympics. Gu has said nothing in defense of the CCP’s ethnic minority victims or the women who are systematically raped in China’s concentration camps. But she is an outspoken supporter of fashionable movements for “gender equality” and “anti-racism” in the United States.

They Have Their Alliance, We Have Ours

It’s clear that the authoritarian leftism, neoliberalism, or globalism of Western powers is ramping up like never before. But it is not unique, and neither is it new. For decades, our elites have operated on the same basic principles of what I call “subhumanism” – the positivist ideology that puts the arbitrary will of human rulers above the transcendent moral order established by man’s Creator.

Until recently, these oligarch have been largely held back by our great Anglo-American cultural and legal heritage. That heritage, which is rooted firmly in a Christian view of the dignity of the human person as made in the image and likeness of our God, is what formed our Western constitutions and legal rights.

That’s why the CCP brutally suppresses any belief in a Power above the state. And it’s also why Western elites have spent the last two years attempting an all-out coup against our laws and customs. It’s why the CCP calls Uyghurs “terrorists,” and why global elites call salt-of-the-earth truckers and those who support them “terrorists” too.

Because We Still Believe

If there’s one thing we ought to learn from the Western-elite-backed Beijing Olympics, and from the recent actions and rhetoric of the powerful in the West, it’s that the CCP and Western globalists are ideological allies against us.

It’s helpful to know who your enemies are.

Jason Jones is a senior contributor to The Stream. He is a film producer, author, activist and human rights worker. Follow his podcast, The Jason Jones Show.