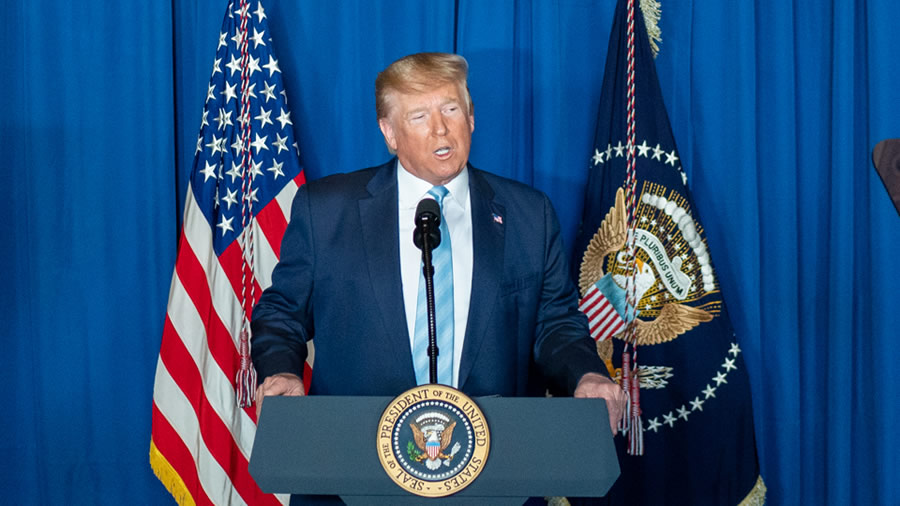 In this Jan. 3, 2020, file photo, President Donald Trump delivers remarks during a press conference at Mar-a-Lago in Palm Beach, Fla., following the U.S. airstrike in Iraq that resulted in the death of Iranian commander Qassim Soleimani.

How should Christian conservatives respond to President Trump’s statement that he would have no problem voting for a gay president? Should this be a deal breaker in terms of our 2020 vote?

Earlier this week, Rush Limbaugh created a media firestorm when he said that America is “still not ready to elect a gay guy kissing his husband on the debate stage president.” And my article titled, “I Will Say What the Political Leaders Cannot Say About Pete Buttigieg,” seems to have struck a chord with many readers.

As for President Trump, during a Fox radio interview with Geraldo Rivera, he said that, “It” — meaning, homosexuality — “doesn’t seem to be hurting Pete Buttigieg.” As for whether Americans would vote for him, Trump said, “I think there would be some that wouldn’t — and I wouldn’t be among that group to be honest with you.”

So, to repeat: Should this be a deal breaker for Christian conservatives?

Trump already has the baggage from his past. He has the baggage of his often uncalled-for, cruel, even dishonest speech. Should this be the straw that breaks the camel’s back? Obviously, every individual must make an individual decision. But I would submit two points for consideration before a decision is made.

First, this is exactly how I would expect Trump to answer.

Remember that during the primaries he said that Bruce “Caitlyn” Jenner would be welcome to use the women’s bathroom at Trump Tower. That has been his personal view all along.

He also proudly held up a gay pride flag of LGBT supporters of Trump during a campaign rally in October, 2016. He was glad to have their backing. That’s why his answer doesn’t surprise me in the least. I don’t agree with it (just as I don’t agree with many of his other statements). But it’s nothing new.

Look at What His Administration Has Done

Second, Trump’s policies have consistently pushed back against LGBT activism and for Christian conservative rights. That’s why, last year, the HRC (the world’s largest gay activist organization) labeled Trump the “worst president on LGBTQ issues ever.” The HRC even accused the Trump administration of “targeting gay, lesbian, bisexual, transgender and queer people” every day.

In their “Timeline of Hate,” the HRC begins with this claim: “Since the moment Donald Trump and Mike Pence walked into the White House, they have attacked the progress we have made toward full equality for the LGBTQ community and undermined the rights of countless Americans.”

To be clear, I stand against LGBT people being “attacked” or “targeted.” But when the HRC uses that language, it often means, “The Trump administration is pushing back against the radical extremism of queer activism.” For that, I am glad.

History has repeated itself. Trump has not betrayed us. LGBT activists know that well.

The timeline entry for January 20, 2017, reads: “Less than two hours after Trump and his virulently anti-LGBTQ activist Vice President Mike Pence were sworn into office, all mentions of LGBTQ issues were removed from the official White House webpage.”

More significantly, the timeline entry for February 22, 2017, reads: “Under the direction of Attorney General Jeff Sessions and Education Secretary Betsy DeVos, the U.S. Departments of Justice and Education revoked the Obama Administration’s guidance detailing school obligations to transgender students under Title IX of the Education Amendments of 1972.”

And this is just the beginning of 2017, Trump’s first year in office. I could list scores of other examples, along with the impact of the nearly 200 conservative judges who have been appointed by Trump.

That’s why LGBT activists are, with rare exception, diametrically opposed to President Trump and see him as an enemy of their cause.

According to the Transgender Equality website, “Since the day President Trump took office, his administration has waged a nonstop onslaught against the rights of LGBTQ people.” The site even refers to Trump’s administration as “The Discrimination Administration.”

And there is a lengthy page on the gay-activist, GLAAD website devoted to Trump, listing dates and details. It notes that, on January 16, 2020, “A directive by the Trump Administration across multiple government agencies was issued to strengthen access to federal dollars for religious-based organizations — even if the organization is anti-LGBTQ or has an anti-LGBTQ record.”

This is what Trump and his administration are doing, which is why Christian conservatives are pleased and LGBT activists are grieved. (Again, I have no joy in seeing those who identify as LGBT feel attacked. And I do not want them hurt. I simply believe that many of their goals are detrimental to the overall well-being of our society, which is why I oppose them.)

Back on November 1, 2016, I wrote, “On October 30, at a rally in Colorado, Donald Trump proudly held up a rainbow-colored, gay flag on which was written ‘LGBT’s for Trump.’”

I continued (in a similar vein as in this present article), “As Christian conservatives, what are we to make of this? Is it yet another proof that we must compromise our morals to vote for him? And will he betray us once elected?

“Interestingly, major gay websites like Advocate.com were not impressed with his gesture, declaring, ‘It’s an empty gesture from the Republican nominee, who opposes marriage equality and has a proudly homophobic running mate.’”

Trump Has Not Betrayed Us

Well, history has repeated itself with the same tune and the same lyrics. Trump has not betrayed us, and LGBT activists know that well.

In short, on a personal level, Trump has no issue with LGBTs and would potentially vote for a gay president. On an administrative level, he is consistently pushing back against their activism and standing up for our religious freedoms and rights.

That’s one reason my vote for him in 2016 was justified. And that’s why I believe my 2020 vote for him will be justified as well.