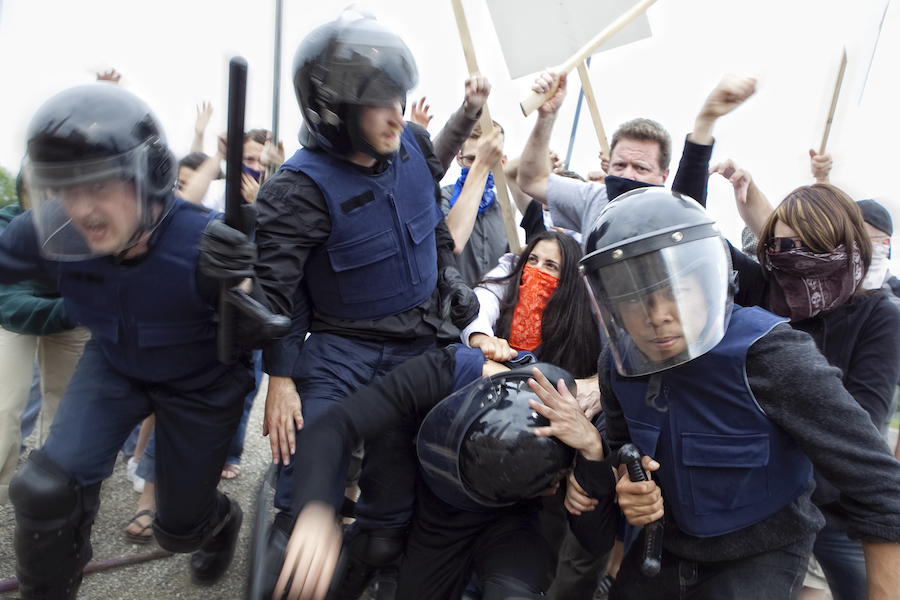 But the police in many cities already operate like the army. Gone are the days of policemen who just carried sidearms and almost never even drew them. Police now drive tanks and armored vehicles. They even use military helicopters to disperse protesters and rioters. They carry rubber and wooden bullets, stun grenades, sound cannons and tear gas canisters.

For many years, influential people have described cities as if they were at war with their people. With riots breaking out after the police killing of George Floyd, more people are seeing the militarized police in action. Some like it. Many don’t.

It’s likely not what the founders intended. Yet the federal government funds it. Its Defense Logistics Agency’s 1033 Program lets the military transfer equipment to local law enforcement agencies. The Homeland Security Grant Program gives police departments funding to buy military-grade weapons and vehicles. Proponents point out that criminals are using more sophisticated and deadly weapons, so the police need more to fight back.

A 2017 study found a positive correlation between the amount of military gear and weapons transferred to a police agency and number of civilian deaths.

But is it worth it? A 2017 study says not. It found a positive correlation between a police department’s military gear and weapons and a higher number of civilian deaths. It doesn’t necessarily reduce crime. One recent study found it didn’t.

The militarization of police dates back to the late 1960s. It was the era of the terrorist Weatherman and the Black Panthers. Radical groups led marches that could quickly turn violent. The police wanted military equipment to counter extreme threats.

Even when that threat faded, the police kept their hardware. In fact, the militarization became normalized during the “War on Drugs.” Police needed high-powered weapons to go after drug gangs. It significantly increased after 9-11 during the “War on Terror.” Police facing hidden terrorist cells capable of mass destruction wanted the best weapons to fight them.

But the Charles Koch Institute points out that more dangerous weapons aren’t being used by criminals. In 2016, about 75% of homicides were committed with a handgun or a non-firearm weapon other than explosives. As little as 2% of crimes are committed using AR-15s. The number of homicides, robberies and burglaries committed with a firearm has steadily decreased since 1994.

Incentives to Use the Military Equipment are Built in

The Department of Defense’s 1033 program began in the early 1990s. Federal money for this program goes directly to the law enforcement agencies. State and local officials have no oversight. And the police can’t just keep the equipment. They have a strong incentive to use it. If they don’t use it within one year, they must return it to the Department of Defense.

They have another incentive. The cost. They’re responsible for “the insurance, fuel, storage, training, and cost to convert the equipment for law enforcement’s use.” To justify these costs, they need to use the equipment a lot.

This distorts the way they operate. To afford the weapons, they often shift priorities away from the most serious crimes and focus on raising money through civil asset forfeiture. They target the types of crimes likely to result in something of value to seize, such as drug crimes. They don’t make money solving burglaries or even murders. They do make money putting officers in a troop carrier and descending on a drug dealer.

There are other problems with militarized police. The biggest is what having such equipment makes them. Having that kind of weaponry changes the local police into something else.

Mark Cancian, writing at the Center for Strategic and International Studies, says soldiers make bad police officers since they are heavily armed and taught to regard the population as “threats.” Police effectively turned into soldiers will view the people they’re called to protect the same way.

Washington Post writer Radley Balko says if you tell police officers “they’re fighting a war, police officers will treat the people they serve like — almost like an enemy combatant, rather than an American with rights.” Balko wrote “Rise of the Warrior Cop: The Militarization of America’s Police Forces.”

Common Dreams documented the militarization of police in New Orleans during the rioting after Hurricane Katrina.  General Russell Honore, who went to New Orleans to direct the military recovery, expressed his concern that the police were pointing their guns at civilians. “Any time we have policemen pointing weapons at American citizens, they need to go through retraining,” he said. A HuffPost reporter said a police officer pointed a machine gun at him, even though he was not engaging in violence (the gun actually appears to be an AR-15).

Breaking Down Doors With No-Knock Warrants

One area where the police have been accused with overdoing it is obtaining no-knock warrants to break down the doors of suspects without warning. This recently arose in the case of the tragic shooting of the girlfriend of Kenneth Walker. Police were looking for an acquaintance of hers, so obtained a no-knock warrant for her residence. The police said they still knocked and announced themselves, even though they didn’t need to. Walker said he only heard the knocking and thought it was an intruder, so he got his gun ready, shooting them when they knocked down the door. The police shot back and killed his girlfriend, Breonna Taylor.

Because of this and other tragic incidents, leaders like Sen. Rand Paul (R-Ky.) are calling to ban no-knock warrants. Of course, one former law enforcement agent pointed out that no-knock warrants might actually save lives. He said he was involved with a no-knock warrant on a man wanted for child porn. After his team arrested the suspect, the suspect told him that if they had knocked, giving him time to get his gun, he would have shot at them. If the police in the Kenneth Walker case had actually followed the no-knock warrant and not knocked, would that have stopped Walker from shooting, possibly saving the life of his girlfriend?

Are the Police Too Aggressive With Antifa?

The media is highlighting incidents between Antifa and the police, claiming the police’s response is too violent relative to what Antifa is doing. Does their level of violence justify the level of police tactics being used against them? They smash windows and burn buildings. They throw Molotov cocktails and other objects at the police. While numerous police officers have been injured, it’s not clear whether any have died.

The criteria for labeling an organization could include Antifa if it were a foreign organization. The suspected group must “engage in or retain the capability and intent to engage in terrorism, and threaten the security of U.S. nationals or the national defense, foreign relations, or the economic interests of the United States.” So it’s not clear how Trump would accomplish this, maybe designate some new category in an executive order.

But We Use the National Guard to Conduct Police Functions

Not only are the police being militarized, but we are bringing in soldiers to handle law enforcement situations. Those concerned with the police’s response to the rioters are also alarmed that the National Guard is being brought in. But what exactly is their role?

Governors in various states have called on The National Guard to address the riots, and President Trump has considered broader deployment. More than 18,000 National Guard troops in 29 states and the District of Columbia were activated. They are under the control of the governors. They are engaging in “traffic control, support to law enforcement, transportation and communication support. They’ve also been called up on to assist with extinguishing fires burning as a result of the unrest.”

In DC, the 500 National Guard troops who have been activated, which report to the president, are not armed. Air Force Senior Master Sgt. Craig Clapper, a D.C. National Guard spokesman, said they are there for support and to push the crowds back. They are also unarmed in Colorado, although they carry defensive weapons like batons, tasers and pepper spray.

Presidents have occasionally called in the National Guard without the approval of governors. Several times during the 1950s and 1960s, presidents sent in troops to states where governors weren’t enforcing civil rights laws.

There have been a couple incidents involving soldiers shooting at the rioters that have come under criticism. In one of them, a National Guard soldier shot three times at a vehicle that was driving fast towards the unit. An investigation is underway.

A significant majority of voters surveyed said they are in favor of using the National Guard to intervene now.

What it comes down to whether the government has become too draconian in its efforts to combat crime. Do we want a nanny state? We saw the results of The Patriot Act. It expanded government enforcement powers to such a degree the government violated civil liberties. Do we want the police to start using military weaponry on us the way the NSA uses computers to track our conversation and movements? Computers just record information. Military weapons kill people.

There has to be some balance. Many of the people denouncing the police and military for combating the rioters suddenly want them around when the rioters come for their own homes and businesses. We need the police to protect us and enforce law and order. The movement to significantly defund the police goes too far. There is a balance between policing effectively while not overdoing it.

George Floyd’s tragic death revealed that the police can make mistakes. Somehow we made do without the militarization of the police before the 1950s. Maybe it’s time to deescalate things a little.