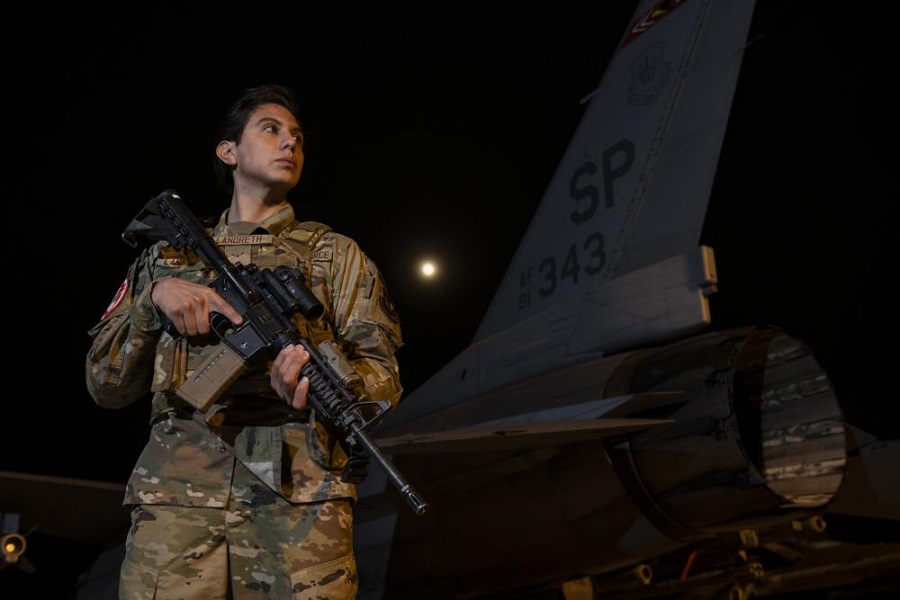 A U.S. Air Force security forces defender stands guard at the 86th Air Base in Romania on April 16, 2022.

As the White House unveils another massive military aid package to help Ukraine defend itself against Russia, more than 100,000 valiant American troops are away from their families to stand guard on NATO territory in Europe.

On Wednesday, the U.S. military also began training Ukrainian forces on how to use 18 howitzers being provided to them for use during the war effort.

“The training, at an undisclosed location outside Ukraine, will last approximately one week and include about 50 of that country’s troops, who can then return to the war and teach others how to use the 155mm howitzers that are being sent by the Pentagon from Army and Marine Corps inventories,” Military.com’s Travis Tritten reports. More military equipment, including additional howitzers, will be sent as a part of the latest aid package.

While it’s easy to become fixated on weapons and dollar amounts, Americans should know how much the selfless men and women of our military are sacrificing as well. Being apart from loved ones for extended periods of time under the very real threat of war – or actual conflict in the case of troops deployed to combat zones – is hard to imagine for the vast majority of civilians, including me.

Celebrating the #MonthoftheMilitaryChild is incredibly important & something that means a lot to CWO3 Noah Day and Spc. Tanesha Day, a father and daughter duo currently deployed together in Europe.

U.S. Army Spc. Tanesha Day knew that feeling all to well while watching her father repeatedly deploy to Afghanistan and Iraq after 9/11.

“I definitely remember taking him to the hangar in the middle of the night to leave and then nine months later going back to watch him get off the airplane with all his stuff,” Spc. Day said. “My happiest memories were always when he would come home and we would all be together again.”

With Europe and the world on the edge in 2022, however, Spc. Day is now deployed to Germany alongside her dad, Chief Warrant Officer 3 Noah Day. I encourage everyone to read Capt. Taylor Criswell’s wonderful story about this unique father-daughter team.

“There is nobody else I’d rather be deployed with,” said Chief Warrant Officer 3 Noah Day.

Please pray for the Days and all military families as they serve and sacrifice to keep the rest of us safe. Indeed, as Chief Warrant Officer Noah Day said, “family is the only thing that matters in the end.”

The situation for thousands of U.S. military personnel still deployed to the Middle East remains unstable. Turkey launched a new offensive against Kurdish rebels this week in northern Iraq, while ISIS reportedly blew up a religious shrine in the country’s eastern Diyala province.

We remain committed to denying Daesh the ability to operate in the shadows hurting innocent people & we continue working w/@cmoc_sdf to create a better future for the people of NE Syria. #StrongerTogether pic.twitter.com/Pqhs2ZDEft

In Syria, where brave U.S. troops can be seen conducting a training exercise in the images embedded above, troubling new details are coming to light about a recent attack that injured four American service members.

According to Reuters, the Pentagon now says U.S. troops were hurt not as a result of “indirect fire,” but because of explosives placed around the eastern Syrian base. The facility, which houses American military personnel, is known as the Green Village. The Pentagon said that investigators are still trying to determine who planted the explosive devices. American troops are in Syria to battle ISIS, but as the Reuters report correctly noted, Iran has also been attacking U.S. troops in both Syria and Iraq through its terrorist proxies.

Please continue to pray for the four injured American service members as well as thousands of volunteer warriors still serving across the volatile Middle East.

U.S. Navy sailors serving aboard the USS Mitscher are back home after completing a deployment to Europe. 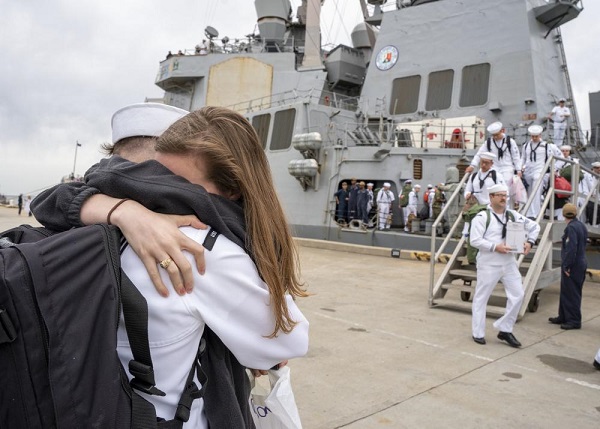 A U.S. Navy sailor assigned to the guided-missile destroyer USS Mitscher embraces his wife after the ship’s return its homeport, Naval Station Norfolk in Virginia, on April 16, 2022.

Welcome home, warriors! Thank you for defending and preserving our freedom.