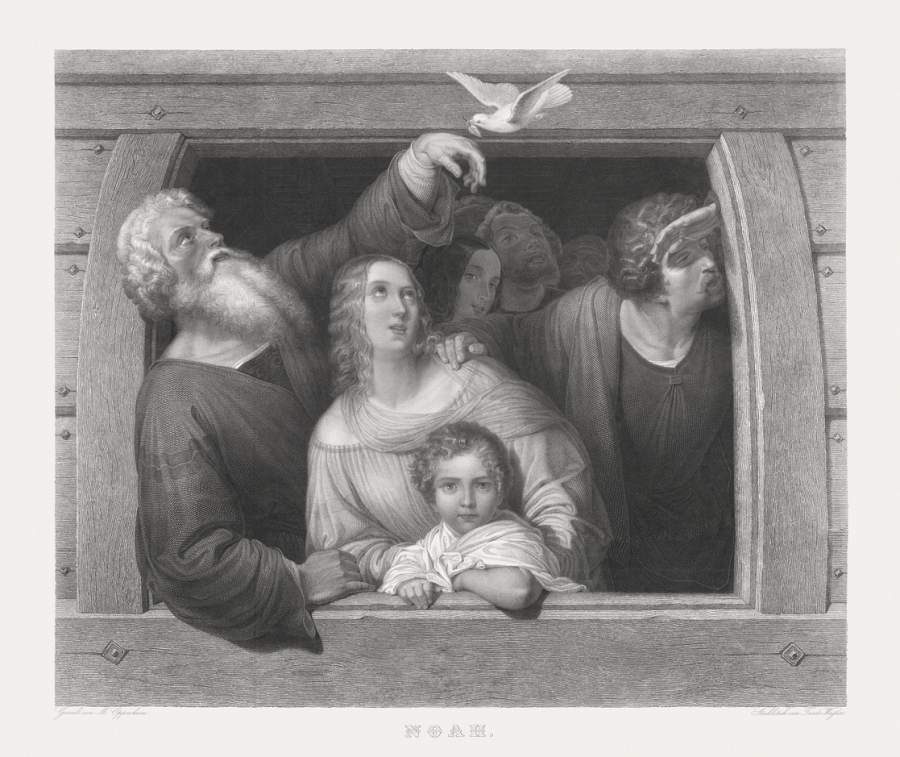 The Covenant of Noah marks our first written reference to the Natural Law.

The most fundamental question in politics is this: What is the proper source of law? Does it originate simply in the will of the powerful, imposing their wishes on the weaker?

The “powerful” might be a tribal chief. Or a king backed by armed warriors. Or a technocratic state that claims the support of the majority of citizens (themselves swayed and led by media that the powerful control). Clearly one must have power exercised in some form if law is to prevail at all, instead of mere disorder.

But is the source of law, government policies, taxation and redistribution grounded in nothing more than that? That would leave as the conclusion of political philosophy essentially the stark assertion: “We do these things because we can. Just try and stop us.”

Isolated Atoms in a Godless Void

If that were true, then every argument about justice, equal treatment, and individual rights would finally be empty rhetoric. Mere sophistry used by one group seeking power to win support. It would be grounded in no deeper truth about existence, human nature, or right and wrong.

Secular politics always ends in the stark assertion: “We do these things because we can. Just try and stop us.”

That is the bleak conclusion of philosopher Thomas Hobbes. He saw human beings as isolated atoms colliding in a godless void, seeking satisfaction of their primal urges and desperately avoiding death. That is the core belief which secularists hold about human existence, whatever furry Woke puppets they wave about to distract themselves from the truth. They’re holding Punch and Judy fights between “Racist” and “Anti-Racist” dolls, on the deck of the Titanic. We down in the lifeboats ought to be jeering and throwing peanuts.

America was founded on something much more robust, and richer. A few Deists colluded with a large majority of Augustinian Christians (i.e., Protestants of various hues) in drawing up the Declaration of Independence and Constitution. But the overwhelming consensus of patriots who rallied to overthrow British power was clear.

Man has a given nature, one given him by God. He has an eternal dignity, as the image of that God. Flowing from his nature and his dignity, he has “unalienable” rights that the State and his fellow citizens must respect. While we might read of these rights in texts of divine Revelation, they can also be known by reason. So we can in good conscience insist that every citizen (believer or not) respect them, since the Natural Law is written on the human heart. (Romans 2:15)

How did America’s founders come to this conclusion? As I wrote last year, “Scholar Robert Reilly tells that story in rich detail in his book America On Trial. Reilly explains how the very idea of human freedom grew from specific historical roots. Without each of these elements, the freedom we treasure would simply be unthinkable — as in … no one would ever have thought of it all:

“The synthesis of these influences, Reilly shows, laid down the roots of freedom and constitutional government. That happened not in the Enlightenment or the Renaissance, but during the Middle Ages. That’s where we find the first claims by Christians (like Thomas Aquinas) that persons have basic rights which no ruler may trample. Those who do are tyrants, who lose their legitimacy and deserve to be overthrown.”

A Prophetic and Unwelcome Claim

Ironically, in many Catholic countries, monarchs succeeded in agglomerating absolute, tyrannical power — even over the Church. But in mixed, quasi-Protestant England kings failed to monopolize public worship or disarm the population. So the medieval tradition of rights-based resistance to tyranny would be passed along by Protestant settlers in America.

The idea of a higher law, with deeper roots, than those imposed by any given government is a profound one. It has proven controversial wherever thinkers dared to suggest it. Obviously, few rulers welcome constraints on their power. Instead they resent them, and often persecute those who point to the ways in which unjust laws and evil practices violate the fundamental Natural Law. The recurring conflict between natural law prophets and pragmatic, unprincipled rulers goes all the way back to Classical Greece. As Jason Jones and I wrote in The Race to Save Our Century:

Sophocles put this awareness of a transcendent law in the mouth of Antigone, who sacrifices her life to disobey King Creon’s unjust edict. In the play, her brother, Polyneices, committed treason by attacking the city of Thebes, and died in battle. Creon decides to impose on Polyneices the ultimate punishment — to deny his soul rest in the underworld by refusing him proper burial. His body is left to the dogs and crows, and the death penalty is promised for anyone who dares to inter him.

Antigone confronts the king, whose power is theoretically absolute, and insists that his laws are subject to an extralegal arbiter, the laws of the gods. … She tells Creon that she defied his decree because it’s “not a law decreed by Zeus, nor by Zeus’ daughter, Justice, who rules with the gods of the Underworld. Nor do I believe that your decrees have the power to override those unwritten and immutable laws decreed by the gods.”

“These are laws which were decreed neither yesterday nor today but from a time when no man saw their birth; they are eternal! How could I be afraid to disobey laws decreed by any man when I know that I’d have to answer to the gods below if I had disobeyed the laws written by the gods, after I died?”

From the Colosseum to the Mayflower

The early Christians took on Antigone’s mantle when they refused the commands of the Roman state. They died rather than venerate the reigning emperor as an incarnate god, and burn incense before his image. Christian dissenters against intolerant governments (both Catholic and Protestant) looked to them as exemplars when they insisted on following their consciences, not the king’s.

The American founders carried on this tradition. The next to bear the torch? The Abolitionists, who insisted that man’s fundamental nature, as knowable by reason, overrode evil laws and even our Constitution.

The righteous fury with which we fought World War II was fueled in part by our horror at Fascist disdain for man’s natural rights. The US insisted, against other Allies’ resistance, that the Nuremburg Trials cite a “higher law” than any national legislation, such as Hitler’s Nuremberg Laws, and hang men for violating it.

It was only logical, then, for the Civil Rights movement to rest not on tribal conflict among the races, but the claims of the Natural Law. Rev. Martin Luther King, Jr., cited that law in his “Letter from Birmingham Jail.” He claimed that its tenets rendered null and void the local segregation laws his followers peacefully flouted.

Today the pro-life movement, and our resistance to LGBT and transgender madness rest on that self-same law. Likewise our insistence on gun rights, the rights of parents, and other fundamental truths implied by human nature itself.

Without it, we grope and collide blindly, exactly as Hobbes insisted. We and our opponents would equally be “ignorant armies [who] clash by night.”