A review of Robert Reilly’s America on Trial

I feel like a fevered fantasist in 1993, hunched over an IBM Selectric, typing  single-spaced in a double-wide an apocalyptic end-times novel which I’ll self-publish and sell at gun shows. But I swear, I’m just reporting the news. Two items for your enjoyment:

Police have been unable to respond to “rapes, robberies, and all sorts of violent acts” occurring in Seattle’s East Precinct, which authorities abandoned on Monday, leaving the area in the hands of activists who set up their own police-free “Capitol Hill Autonomous Zone” (CHAZ), Seattle Police Chief Carmen Best said Thursday.

The police chief is now working on a plan to reopen the precinct, telling reporters calls for service “have more than tripled.”

“These are responses to emergency calls — rapes, robberies, and all sorts of violent acts that have been occurring in the area that we’re not able to get to,” she said.

Seattle Mayor Jenny Durkan offered a different spin on the Antifa/Black Lives Matter statelet that imposed itself on a Seattle neighborhood.

The mayor of Seattle has no idea when the protesters occupying the “Capitol Hill Autonomous Zone,” or CHAZ, in her city will disperse.

During an interview with CNN host Chris Cuomo, Seattle Mayor Jenny Durkan jokingly stated that the area could hold a “summer of love,” alluding to a mass gathering of peace activists in 1967 in San Francisco.

“How long do you think Seattle and those few blocks looks like this?” Cuomo asked.

“I don’t know. We could have a summer of love!” Durkan responded.

How can a city’s mayor describe a burgeoning rape camp as a site for a “summer of love”?

Do we really need to ask ourselves that?

The chief public health official in Pennsylvania during this pandemic (dumping COVID patients on nursing homes after whisking his own mom to safety) is a middle-aged dude in a wig who insists he’s a woman. People get banned from media or fired from their jobs for refusing to admit that men menstruate. The most popular living novelist, J.K. Rowling, now fights for her professional life for denying the claim.

Our government pretends in 50 states that men can marry men, and women women. The marital covenant itself, which claims to bind us for life, is now the weakest legal bond in American law. Student loan debts are sacrosanct and indissoluble. But divorce is “no fault,” and neither partner can contest his or her abandonment in court.

We pretend that “kids are resilient” and divorce doesn’t hurt them. We tell ourselves that it doesn’t matter that most molestation of young girls happens at the hands … of their mom’s new boyfriend.

Since 1973, our government at every level has pretended that unborn children amount to “fetal tissue” or “products of conception.” Large parts of the GOP, along with now a lockstep Democratic party, colluded in that great lie. To justify it, Supreme Court justices lied about the U.S. Constitution. First they “discovered” an imaginary “privacy” right applying only to sex. When too many pro-abortion liberals got embarrassed by that fiction, the Court crafted another. Justice Anthony Kennedy (who got on the court thanks to Reagan staffers lying to the president, claiming he was pro-life) penned a poetic “noble” lie about America’s founding itself. Deciding Planned Parenthood v. Casey, Kennedy waxed poetic.

He wrote, in a phrase that will strike college sophomores as profound after they’ve smoked their second bong: “At the heart of liberty is the right to define one’s own concept of existence, of meaning, of the universe, and of the mystery of human life.”

Those are all just words, after all. Just empty names we attach to things, as means of getting what we want. Such is thinking that brought us the chaos in our streets.

Is that what our founders fought for? That’s what Catholic Integralists insist. Washington, Adams, Jefferson, Madison: they were all secret followers of Hobbes, whether they knew it themselves or not. For all their talk of virtue and religion, they were scattering seeds of atheism and license, which we see now fully sprouted.

So Integralists agree with the ACLU and Planned Parenthood on what our founding did: it laid the train tracks to nihilism. But Integralists, and other anti-Americans on the right, disapprove. Some want instead to impose Catholic sharia.

Leftists rather enjoy the slide down the slippery, Gadarene slope, except sometimes when they gag on its practical outcomes. Like rape camps in Seattle.

The anti-American thinkers you’ve most likely heard of are Rod Dreher, Patrick Deneen, Michael Hanby, and Sohrab Ahmari. They differ on some details. But all agree that American freedom is an ectopic pregnancy, killing our mother country from within. They claim that the U.S. founders were (either consciously or unconsciously) more like Enlightenment radicals than Christian statesmen. So the concepts of freedom they wrote into our Constitution, if followed logically, lead to partial birth abortions and sex change operations, fatherless dads and Antifa encampments.

If that were true, then the left would be right, every time. Their Supreme Court decisions would be perfectly legitimate, and we’d have no right to complain. We’d either have to wait for the U.S. to collapse, then build something else on its ruins. Or else we should simply leave.

But are they? Scholar and long-time pro-life activist Robert Reilly disagrees. In fact, he has published a new book, America on Trial, which every American Christian must read. It’s not a quick breeze to be skimmed on the beach. In fact, Reilly’s book could serve as the single textbook in first-rate college course on political philosophy or American government. It’s just that rich and learned.

The collapse of the synthesis of faith and reason led to the rise of absolute monarchy and other forms of tyranny. But America’s founders were part of a revival of natural law, and respect for human freedom grounded in virtue.

And it’s marvelously clear. As I wrote on Amazon:

The author is supremely well-read and thinks with the clarity of noonday sunlight on an Alpine slope. He grounds the American system and founding in the great philosophic tradition and Jewish-Christian faith, and shows how historic perversions of reason have produced the intellectual, social, and political chaos that now afflict us. Enemies of America, left and right, will fear this book. It’s the antidote to their half-baked complaints and ideological nostrums.

The Three Pillars of Freedom

Let me sum this rich and convincing book quite simply. Reilly shows how the very idea of human freedom grew from specific historical roots. Without each of these elements, the freedom we treasure would simply be unthinkable — as in … no one would ever have thought of it all.

The synthesis of these influences, Reilly shows, laid down the roots of freedom and constitutional government. That happened not in the Enlightenment or the Renaissance, but during the Middle Ages. That’s where we find the first claims by Christians (like Thomas Aquinas) that persons have basic rights which no ruler may trample. Those who do are tyrants, who lose their legitimacy and deserve to be overthrown. 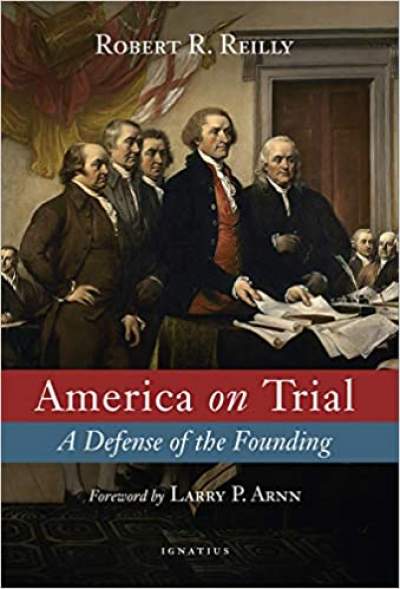 Where the West Went Wrong

Reilly shows how that synthesis was shattered, and that vision of freedom lost, by a crucial intellectual wrong turn. William of Ockham and his followers denied that words like “mankind” or “nature” had any transcendent meaning. There were no essences behind things that anchored words in reality. Instead words only referred arbitrarily to individual, concrete things. They were simply “names,” which is why this school of thought got dubbed “nominalism.”

So how could “man” have fallen with Adam, and been redeemed in Christ, if “man” is just an empty concept, apart from individual men and women? If God (as Ockham claimed) isn’t bound by His own reason, but could be as capricious as Islam’s Allah, how can we speak of a natural law that lets us object to the deeds of tyrants?

Why feel bound by such laws ourselves? Why not make ourselves into little tyrants? Why not let each of us decide on “the mystery of human life” as if we were tiny, arbitrary gods?

Indeed. Those are excellent questions. Thanks to the embrace of nominalism by most modern thinkers starting with Hobbes, we don’t have any answers. Except for Justice Kennedy’s, which is just a stoner’s shrug.

By a series of twists and turns, Reilly shows how the collapse of the synthesis of faith and reason led to the rise of absolute monarchy and other forms of tyranny. More hopefully, he shows how America’s founders were part of a revival of natural law, and respect for human freedom grounded in virtue, not arbitrary capriciousness.

They wrote with great confidence about “Nature and Nature’s God” because they believed that reason could show us what God willed for us. Not the unanchored, arbitrary reason of Ockham and Hobbes, but a reason that disciplines itself by careful reflection on nature as orderly, the fruit of an orderly, reasonable God Who knows us and loves us.

Get this book. Read it slowly. Pass on its lessons to your kids.