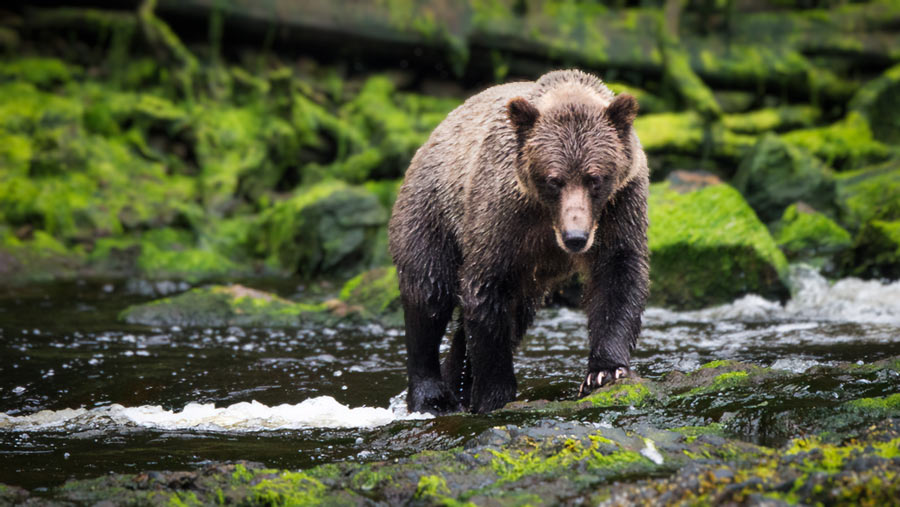 Three grizzlies strolled along the river below us at McKinley National Park (back when it was called that), as we sat on the rear bumper of my uncle’s pickup truck, sipped hot chocolate, and watched.

The first bear that I had met in Alaska, a little blacky by Auke Lake in Juneau, we chased into the woods. But I was older and wiser now, and these bears were bigger, so we respected their space. Their spheres of political influence, if you will.

G.K. Chesterton said that the “reasonable” way to treat a tiger was “to admire his stripes while avoiding his claws.”

How, then, should we treat a bear with missiles? Or a dragon that breaths radioactive fire?

One of the gravest mistakes Americans are making is a failure to treat dangerous enemies with respect.

“We are at war with Russia,” we are told. We are sending tens of billions of dollars worth of weapons to Ukraine, to ward off the bear that is tearing that unfortunate country apart. “Putin must be deposed!” our leaders say. “Put him on trial as a war criminal! Let Sweden and Finland and Ukraine itself into NATO!”

So we poke the bear, with his thousands of nuclear missiles, and hope nothing bad happens. How odd that some of the biggest cheerleaders for war with Russia are precisely those who refused to face down communism when it sought to take over the world.

A Little Respect Can Go a Long Way

Notice, by contrast, the tone of that supposed war-monger Ronald Reagan: “Mr. Gorbachev, tear down this wall!”

We overlook the shortest word in this famous sentence: “Mr.” Do you ever hear our leaders say “Mr. Putin” or “Mr. Xi?” “But Putin is a war criminal,” you say. Yes. And Stalin killed millions. Yet a sick FDR traveled all the way to Yalta to meet him.

One of the gravest mistakes Americans are making is a failure to treat dangerous enemies with respect. Simple gestures of respect would cost us little, yet would make World War III less likely.

Let me be clear. Putin is an evil man, possibly mad, and I despise Xi Jinping from the depths of my heart. When Chairman Mao died in 1976 I, as a fifteen-year-old, wrote to the editor of my newspaper asking, “Why is the world singing the praises of this mass-murderer?” I do not propose to lie about our present crop of tyrants, either.

But respect, such as we might give a hungry predator along a river in Alaska, is a powerful force in our personal lives and in geopolitics as well.

Russia is Not Doomed to be a Slave State

The Russian invasion of Ukraine involves crimes for which Vladimir Putin must ultimately answer to God Almighty. But I have argued here that our failure to respect Russia after our victory in the Cold War may have helped create this problem.

Some say Russia has a history of nothing but tyranny and cruelty, from Ivan the Terrible to Vladimir Lenin to Joseph Stalin to Vlad the Invader. But of those four oft-cited examples of “Russian” tyrants, only Putin is actually Russian. Ivan the Terrible was the product of Greek, Serbian, Mongolian and Hungarian ancestors. Vladimir Lenin was also a mutt, of German, Swedish, Jewish, Chuvash and Kalmyk as well as Russian lineage. Stalin and his henchman Beria were both Georgian.

My point is not to blame tyranny on some other ethnic group. But it is simplistic to disrespect “Russian” culture, which is as much sinned against as it is sinning.

We’re not going to win Russia or China over by despising them as inveterate losers, or as fated by their cultural DNA to be slave states. As I pointed out earlier, Japan became our ally and friend in part because after World War II, General MacArthur treated that nation with respect. It had never been a democracy before, but now it has thrived in peace and freedom for almost eighty years.

Without that respect, we see a different story. After the Soviet Union fell, Russia went on a drunken binge. Perhaps the weather was partly to blame. The country was also depressed: it had been one of the world’s two great superpowers — leaders in science, music and art — but had “lost the Cold War” and become the butt of jokes.

Such insults are also deeply stupid. Everyone knows that a bear becomes more dangerous if it is accompanied by a cub, or injured, or near its den. Why prod a wounded bear with a sharp stick just outside its cave?

We Must Consider the Dangers

Is it worth risking nuclear war to preserve Ukraine’s full sovereignty? Am I a coward to ask? It is not my life alone that may be at balance. The Marvel comic story of Thanos could well come true on our planet, except with no hope of going back in time for a re-do. Our bodies may, if this present geo-political confrontation goes poorly, be nuked into black flakes. Those outside the immediate blast zones would suffer a messier end — of burns, radiation sickness or even hunger. Then Xi Jinping and his heirs will rule what is left.

Is it not also cowardly to fail to face those dangers forthrightly?

Who is now asking, “What will America do if the frustrated madman who rules Russia launches battlefield nukes at Ukraine?” Is it wise for our administration to publicly gloat over the deaths of conscripted young men fighting for a foolish enemy? How long might the oceans stay toxic and the rains spread death?

Observe From a Distance

If you visit the national parks this summer and meet a large carnivore (or even a bison or moose!), take my advice: watch it from a distance.

Neither is it America’s job to go abroad, seeking dragons to slay. Pray for and support Ukraine modestly, but let us tone the rhetoric down. Remember that Russia and China have given the world much, too. Let’s recognize the limits of our reach and leave the ultimate issue in God’s (let us pray) merciful hands.