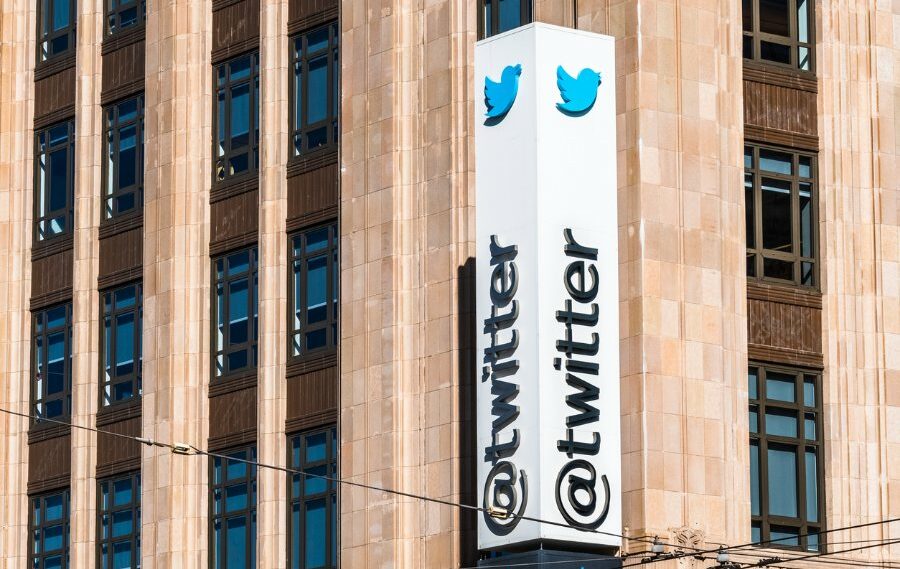 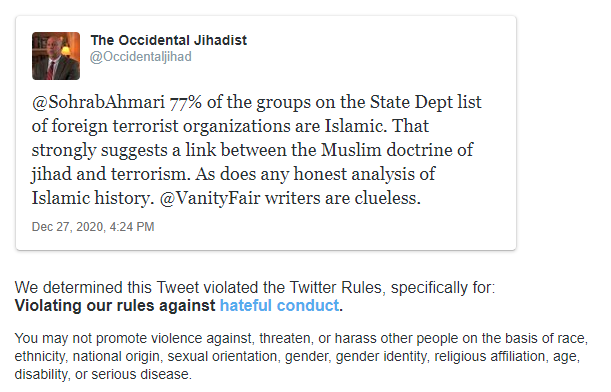 Nothing there “promotes violence.” So I guess Twitter’s censors belatedly decided that my tweet from two months earlier “harassed” Muslims for their “religious affiliation.” (By the way: do Twitter’s rubrics mean that one can harry others if they have non-serious diseases?) In 12 years on that platform, this was the first time I’d been banned. (Unlike Facebook, which shadow-banned me for a never-explained reason. But which I suspect was, also, posting facts about Islam. Well, and maybe also a picture of notorious, armed Islamophobe King Richard I outside Parliament. I eventually deleted my account and created a new one to escape purgatory.)

What Got Twitter’s Goat: Stats on Islamic Terrorist Groups?

But what about my Tweet ran afoul of the Karenistas there? Well, I am off, now, by 1 percentage point. With some changes early this year, the State Department FTO list now includes 71 total groups. Fifty-four of them are Islamic. Yes, I researched each one. And, if anything, I erred on the side of caution. If a group’s motivations and goals were not overtly tied to Islamic norms, I didn’t count them. So the figure dropped to…76%.

What Got Twitter’s Goat: Jihad’s Connection to Terrorism?

Perhaps I was wrong to even suggest a link between jihad and terrorism. Wait — no, I wasn’t. Every group on the aforementioned list espouses jihad. And not the bogus “jihad” of Muslim self-improvement, or brushing your teeth like “the Prophet.” But rather the 14-centuries old jihad of warfare and conquest. The kind that Muhammad, Islam’s founder, led and which stems from core Islamic teachings. Which both non-establishment and establishment Islamic scholars say modern Muslims should emulate. And which modern Islamic activists acknowledge, and indeed brag about. As I say in my latest book, p. 1: “this does not mean that all, or even most, Muslims are terrorists — far from it. In fact, the vast majority clearly are not. What it does mean is that this belief system, in its rigid, archaic form, is disproportionately responsible for worldwide terrorism and violence.” After all, how could 30 chaps blowing themselves up in a bomb-making class in a mosque have anything to do with the religion? They were probably actually Lutherans sporting MAGA hats and their casseroles exploded.

What Got Twitter’s Goat: Truth About Islamic History?

Clearly I was also wrong, at least in the Twitterverse, to adduce Islamic history, any mention of which constitutes harassing Muslims. (Or maybe just Twitter censors those who like to pretend they’re Muslim.) No one in the Islamic world can handle such truth. Not just that their religion’s founder engaged in violent, religious warfare. But that this idea held sway across space and time. And that just a century ago the world’s last great Islamic empire, the Ottoman one, officially declared jihad at the outset of World War I. Yes, former POTUS Barack Hussein Obama, must be correct that Islam has nothing do with all the beheading, blowing up and butchery done by folks yelling “Allahu akbar.” Furthermore, former CIA director John Brennan, has assured us that “jihad is holy” and definitely NOT what the terrorists are doing, since they don’t understand Islam as well as him.

As we Star Trek fans know, resistance may be futile.
But you do it anyway.

What Doesn’t Offend Twitter: “White Supremacy” as a Threat

After all, the real threat to America, we are constantly told, is not jihad. It’s “white supremacy” and “QAnon.” Both of which came together on January 6 in the “insurrection” at the Capitol, mind-controlled by the Orange Agitator himself. (The “insurrection” in which no one thought to bring weapons.) But “white supremacy” is neither a coherent nor popular ideology. Nor is it one that motivates very many to violence. As I pointed out in these very pages, from 1993-2019 the “white supremacist” death toll was 1.5% that of Islamic jihadists.

Don’t believe me? Read the 2020 Global Terrorism Index, published by the Australian Institute for Economics and Peace. Although it strains mightily to embellish a “rise” in “right-wing terrorism,” the editors are forced to admit that “the deadliest form of terrorism in the West over the past two decades has been religious terrorism, which has almost exclusively taken the form of radical Islamist terrorism.” Nine of the 10 bloodiest terror attacks in 2019 were by Muslim groups. By far the worst of those, killing 266 people, were the ISIS Easter bombings of churches and hotels in Sri Lanka. And the deadliest terrorist groups? The Taliban, ISIS, Nigeria’s Boko Haram and Somalia’s al-Shabab.

What about QAnon, the Left’s and media’s (I know — what’s the difference?) favorite boogeyman now? I’m a Trump supporter, Republican and conservative Christian, but I never got the memo, much less the marching orders, from Hydra QAnon. I guess, being Right but not Far-Right, I didn’t qualify as conspiratorial enough. QAnon, as near as I can determine, allegedly believes that Satanic pedophiles run the country. (Crazy, right?) The percentage of Americans that actually buy into these beliefs is in the single digits. (Even Pew admits how marginal it is.) But CNN and Congressional Democrats have been screaming about it for months. And they claimed to be vindicated on January 6. But hey: pay no attention to those armed jihadists behind various curtains. Like the U.S. soldier arrested just last month for helping ISIS. Instead, let’s pretend that Trump supporters are the real “extremist” threat in the ranks.

I did get back on Twitter after a four-day forced hiatus. I deleted the offending Tweet — but promptly posted several of the data points which I have linked in this article. So my days on that platform are almost certainly numbered. I wish I had as much determination as John Zmirak, who kissed Twitter goodbye. I do like to hawk my books and articles there, and imagine that I am speaking truth to its power. But in reality, at this point I’m probably just preaching to the choir that currently follows me. Still, in my own small way, I’m following the excellent ideas advanced by my friend Rob Jenkins over at “Townhall,” one of which is to resist big-tech and government tyranny by “broadcasting the truth.” As we Star Trek fans know, resistance may be futile. But you do it anyway.

Timothy Furnish holds a Ph.D. in Islamic, World and African history. He is a former U.S. Army Arabic linguist and, later, civilian consultant to U.S. Special Operations Command. He’s the author of books on the Middle East and Middle-earth, a history professor and sometime media opiner (as, for example, on Fox News Channel’s War Stories: Fighting ISIS).