White Terrorists vs. the Sultans of Slaughter 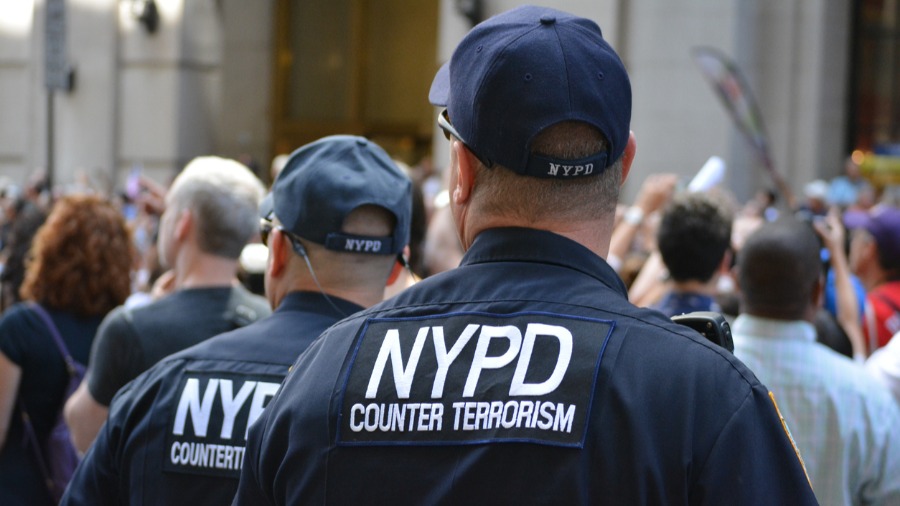 The American left has a fever, and its only prescription is more and more cowbell. White cowbell.

Of course, Donald Trump was a “Nazi” and “racist” to leftists as soon as he declared his candidacy. But rampant overuse robbed those labels of their punch. So America’s socialists switched to a whiter shade of libel. And racial bashing of the American majority jumped the great white shark after the mass shootings in Gilroy, El Paso and Dayton. The latest issue of Time has a cover story on this alleged pale epidemic. For Zeus’ sake, now even rooting retroactively for the Spartans to defeat the invading, imperialist Persians is now allegedly “fascist.”

Every Democratic Presidential candidate regularly smears President Trump and his supporters as “white nationalists.” (Tulsi Gabbard is the lone exception here, as she is in many other aspects.) The Dems’ zany harpy, Alexandria Ocasio-Cortez, bombards social media with this excrement. Not only does she accuse America of being “infected” with white supremacy. AOC claims that it’s an “international terrorist problem” which needs to be defined as such under federal law.

As someone who teaches classes on the history of terrorism, I want to examine in particular this topic of “white terrorism.” Right now there are 68 groups on the U.S. State Department List of Designated Foreign Terrorist Organizations. None engages in “white terrorism.” In fact, only five of the entire list have primarily “white” members.

What’s the current status of these groups? ETA officially dissolved in 2018. Kahane Chai is expired. Continuity IRA hasn’t staged any attacks in Northern Ireland for 10 years. Revolutionary Struggle last did so in 2015. The Real IRA is the only active “white” group on State’s list.

But none of these groups ever grounded political violence in being “white.” ETA fought for Basque nationalism. Kahane Chai was militantly Jewish. Revolutionary Struggle’s ideology is far left, anarchist and Marxist. And by definition any group with “IRA” in its title wants the English to give all of Ireland back to the Irish. Fifty-two of the groups on the list are Islamic, however. That’s 76 percent, for anyone who works at the DNC. Or whose initials are AOC.

Actually, Iranian and Turkish terrorist groups could easily be categorized as “white.” But since neither the Turkish Marxist Revolutionary People’s Liberation Front nor the Iranian Islamic Revolutionary Guards Corps, white as their members are, wear MAGA hats, carry AR-15s and listen to country music — they don’t bolster the left’s “white terrorism” narrative.

Leftists like AOC are obsessed with claiming that the “far right,” “Nazis” or some other “white” ideology are really the threat to humanity. So let’s look at data going back to 1993. That’s the year of the first attempt to bring down the World Trade Center buildings. It also allows us to include the 1995 Oklahoma City bombing.

According to this source, the death toll for all Islamic terrorist attacks, worldwide, is at least 21,537. I also use this source, which contains data on less deadly incidents. Under that latter category, there have been at least 54 domestic jihadist attacks in the U.S. since 1993, killing 164 people. This, of course, does not count 9/11. That’s a global death toll by Islamic terrorism of at least 21,701 over the last 26 years.

But were they “white terrorists,” in ideological terms? McVeigh’s “manifesto” is clearly anti-government. Yet he also excoriated America for what “we rain on the heads of others all the time” in places like Serbia and Iraq. But for the sake of argument, let’s include it in this category. After all, McVeigh did tout the white separatist novel, The Turner Diaries.

Another 28 people were killed within the U.S. by terrorists showing some degree of “white” ideology over the last three decades. Examples include the 2012 Sikh Temple, 2015 Charleston church and 2018 Pittsburgh synagogue shootings in the U.S. Overall, the global death toll of “white terrorism” from 1993 to 2019 is 346. (Stephen Paddock’s 2017 shooting of 58 people in Las Vegas remains a mystery as to its motivation.)

So “white terrorists” have killed 1.5 percent as many people as Muslim terrorists over the last quarter-century.

Not Quite a Hoax, But Close

I used to lecture on the Middle East and Islam to U.S. Army and Air Force officers at places like Joint Special Operations University and Defense Institute for Security Assistance Management. When discussing topics like jihad and terrorism, inevitably a Major (usually female) would come up during a break and ask: “What about white, right-wing terrorism?” I’d usually reply “What about them? They kill so few that groups like ISIS or al-Qa`idah would laugh at them.”

What about the ideologies of these recent mass shooters? The Dayton killer, Connor Betts, who killed nine, seems like a leftist and possible Satanist. He wanted to “kill every fascist.” William Santino-Legan, who killed three in Gilroy, had no coherent ideology, but did identify as Italian-Iranian. Crusius, the El Paso mass killer, was racist and, according to his manifesto, thought it best to “divide America into a confederacy of territories … for each race.” (Aztlan believes the same. Should they be on the terrorist list?) He also wrote “if we get rid of enough people, then our way of life can become more sustainable.” That’s a far-left environmentalist view. It’s also the ideology of Thanos.

Tarrant, the New Zealand mass murderer, likewise, claimed to be an “eco-fascist” and that “the nation with the closest political and social values to my own is the People’s Republic of China.” Are these views far right, or far left? That seems to depend on who’s writing the article. And which ideological ax the author wishes to grind.

The Worse Things Get, the Better it Is

Probably Breivik, Tarrant and Crusius are best viewed as true “lone wolves” who pick and choose elements of various ideologies to act out their bloody personal grievances. Protecting “white” culture and keeping out “invaders,” particularly Muslim ones, are often key.

But rabid environmentalism and socialism pull from the other side of the political spectrum. Then there’s “accelerationism,” which Tarrant promoted. The ADL has tried to tie it to all “white terrorists.” At root, it’s a secular attempt to “hotwire the apocalypse.” The idea is to force change, usually by radical leaps in technology, or violence.

But accelerationists can turn up on the Left as well as the Right. Shooting a bunch of people to spark civil war in the U.S. (right-wing) or to cull the human herd (left-wing) does not a coherent, or cohesive, movement make. No matter how often they cite a Nietzsche knock-off. Contrast this with Islam, the world’s second-largest religion. It has a very sophisticated doctrinal system. It’s been around for almost 15 centuries. And its concept of jihad goes back to its founder. No wonder Islam’s body count puts that of “white terrorism” to shame.

Where We Should Be Focusing Our Attention

So while Tucker Carlson may have overstated the case to say that “white supremacy is a hoax,” it’s abundantly clear that “white terrorism” is, Leftist hyperventilating aside, much ado about very little. Of the ten active domestic American terrorist groups, only three are “white supremacist.” The Aryan Nations (several hundred members), the apocalyptic-sounding Atomwaffen Division (all of 80 members), and the KKK. The latter, often presented as a dire threat to the Republic, has 8,000 members, at most. That’s 160 guys in hoods per state. Or, here in Georgia, one per county. And in fact, according to the FBI, the most dangerous terrorist group inside the U.S. is the enviro-wacko Earth Liberation Front. But only because the feds are busy pretending that Jama`at al-Fuqra, with compounds in two dozen states, is not a threat.

President Trump’s 2018 National Strategy for Counterterrorism does a good job of redirecting our policies toward the main threat: Islamic terrorists. But even there, probably to avoid charges of “Islamophobia,” the document takes pains to mention non-Muslim “white” groups like the Nordic Resistance Movement. So far this group, active in Sweden, Finland and Norway, has gotten in a few fights and thrown fireworks at folks. They’re also accused of listening to Amon Amarth really loud. But are they “white terrorists?” Not so much.

No one can really agree on a definition of “terrorism.” One man’s terrorist is another man’s Trump supporter, remember. But the one I prefer for my classes is that used by the National Counterterrorism Center. “Premeditated, politically-motivated violence perpetrated against non-combatant targets by subnational groups or clandestine agents.” The El Paso, Gilroy or even Dayton shooters planned ahead, and had political motivations. But no subnational groups were involved. And neither Crusius, Santino-Legan nor Betts were agents of any larger, coherent groups.

So AOC’s demand makes no sense. Maybe if the KKK or the Nordic Resistance Movement had ordered the killings, it would. Perhaps in the future such will happen. But it hasn’t yet.

Modern terrorism has had four phases. Anarchists attacked politicians, 1880s-1920s. National liberation movements went after colonialists, through the 1960s. From the 1970s to the 1990s Leftist-Marxist groups racked up the highest death tolls. Starting about 1979, “religious”-based terrorism took over as the bloodiest. “Religious” means Muslim, of course. So despite the left’s attempt to enthrone “white terrorism” king, it’s at best a pawn. The Sultan of Slaughter remains terrorism as Islamic jihad.