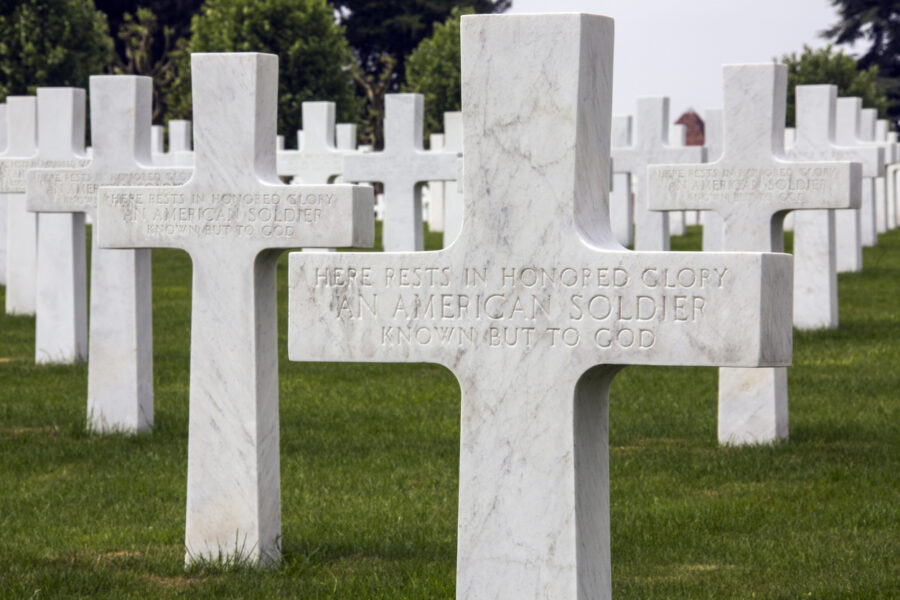 Graves of Unknown Soldiers in the American Cemetery in the Vallee de la Somme in the Le Nord & Picardy region of France. The Battle of the Somme took place in the First World War between 1st July and 21st November 1916. Over 600,000 allied and 465,000 German troops lost there lives in the battle.

I will give away my age by saying that I remember getting excited at Prince’s new hit album 1999. It was the first album by a black artist I ever bought, at age 17, and his music opened horizons. Within a few years, I was going into “scary” neighborhoods to hear blues legends live. A line from that song would come back to haunt us 17 years later: “Tonight I’m gonna party like it’s 1999!”

The implication was that something apocalyptic might happen on such a millennial date. And indeed, the hype around the Y2K bug had a lot of people scared. Would all our power grids fry, and a Mad Max hellscape emerge? Would clunky old Russian computers go nuts and launch all their missiles at America?

Some folks I knew from church bought bunkers in the woods stocked with years’ worth of food. For my part, I decided I didn’t want to outlive my native New York City, so that’s where I stayed. In fact, on New Year’s Eve 1999, I went to a blank verse theater production in Greenwich Village that ended with a party. We counted down to midnight, and as it rang, all chanted happily, “We’re still alive!” Looking around, I could see that these artsy hipsters were secretly just as relieved as I was. We all had some sense that the End might really be near.

It wasn’t. Russia was prostrate, getting plundered by old Communists turned oligarchs, advised by Western technocrats like Jeffrey Sachs of Harvard. The so-called “peace dividend” we were all supposed to enjoy was still going to military contractors, who funded old Bush administration hands like Brent Scowcroft.

Dragging on the Cold War for Fun and Profit

They lobbied Congress not to dissolve the old anti-Communist alliance NATO— suddenly minus a mission. It found a new one, in lassoing each of the countries of Eastern Europe and roping them into alliance with the U.S. We broke the promise Bush’s White House had made to Mikhail Gorbachev (his one condition for peacefully dissolving the Soviet empire) and pushed NATO right up to Russia’s borders. We set a hair trigger for war with a Russia that was rebuilding churches and publishing old KGB files.

And that’s the backstory which explains where we are today, just a few reckless steps away from war with a nuclear Russia. Fools with no family members in the military are calling for U.S. boots on the ground. Geeks whose closest acquaintance with the Air Force came from video games are demanding a “No Fly Zone” over Ukraine.

What Could Possibly Go Wrong?

Let’s be clear about what that means: We’ll start shooting down Russian planes. What would the U.S. do if Russia shot down our planes? The answer is bleak and inescapable.

Perhaps a global war between the U.S. and Russia, with China firmly allied to Russia and ready to swarm into Taiwan.

If you’re like too many Americans, you don’t have friends or family members in the military. That shouldn’t matter, since you probably live near a city that’s targeted by Russian intercontinental ballistic missiles. Ideally, you live in the blast range, which means you’d die quickly and cleanly. More rural Americans would instead die slowly and hideously from radiation poisoning and cancer.

So would most Europeans, including the plucky Ukrainians whom our propaganda outlets have adopted as poster children, the cause of the week, the one group of Christians who are allowed to be nationalists. For the moment.

No Justice, No Peace … No Problem!

The oligarchs who manage America — the people who stole the 2020 election, who censor our dissenters, and lock our dissidents up in solitary confinement — don’t want peace in Ukraine. Not a negotiated peace, which resolves the festering tensions between Ukraine and Russia, which constant Western meddling has deliberately provoked.

No, they will settle for nothing less than a total humiliation for Russia, ideally which results in “regime change,” with Vladimir Putin dead or exiled and U.N. peacekeeping troops guarding the new transgender clinics for kids in downtown Moscow.

These elites are playing chicken, like some hormone-crazed teenage boy driver. Except most teens don’t play chicken while driving a school bus full of women, children, and other innocent civilians. That’s what our “tough-talking” politicians — too many of them Republicans — are doing at the moment.

They’re preening about their courage, pretending to care about Ukraine, and hoping for nice checks to come in from their friendly defense contractors. It will all work out, of course. It always does. The other side always backs down in the end.

What happens then? It’s unthinkable. So think about it, good and long and hard. Is that what Christ wants for His world? Is there some lost gospel that reads:

A Just Peace Is on the Table

The Russians have offered reasonable terms to cease their lawless invasion of Ukraine. The terms are much less extreme than what the U.S. presented in its invasions of Iraq and Afghanistan, which left some half million civilians (a low estimate) dead. (And gained the U.S. absolutely nothing for thousands dead and trillions spent.) I scrutinized those terms last week. Please look at them for yourself. Let your members of Congress know what you think about risking nuclear war to get better ones.

More importantly, Ukraine is looking at them, and considering serious peace talks hosted by the government of Israel — which is playing a far more adult and responsible role in this crisis than our own sputtering, senile regime.

All of which brings me back to that apocalyptic song from my lost youth. Let me offer an altered lyric: “Tonight I’m gonna pray like it’s August 1914.” Our ancestors stumbled into World War I, which slaughtered 20 million and gutted Western civilization, which planted the seeds for Communism, Nazism, and 170 million civilians dead by genocide … and why?

Because some politicians wanted to talk tough instead of listening. They refused to be seen as “soft on” Serbia or Austria-Hungary. They were afraid of being called “Tsar Nicholas apologists.”

May God overwhelm such madness in our own place and time.