In a surprisingly good year for movies, it’s another surprise for the Oscars to actually recognize top quality with some inspiring, tasteful films receiving nominations. 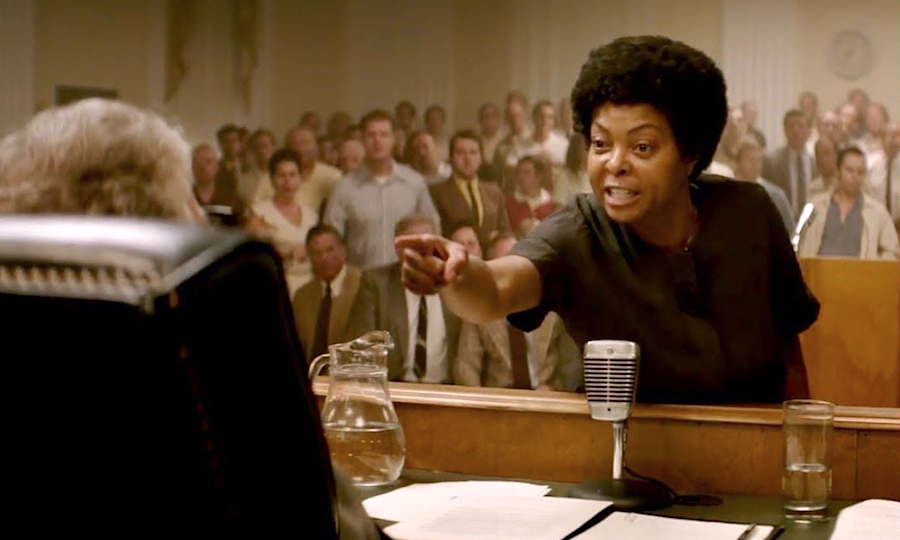 In The Best of Enemies, Taraji P. Henson stars as Ann Atwater — a local mother and community activist fired up for change and justice in North Carolina.

From superhero films that offered more than explosions, to beautiful, profound interpretations of classic stories, the movies had something for everyone in 2019.

The box office set a new $42 billion worldwide record, with megastudio Disney taking in 52 percent of total theatrical revenue. The Mouse House produced seven of the top moneymaking 10 films, including Sony’s Spider-Man: Far from Home which was also co-produced by Marvel.

In years past, the Oscars have ignored what resonates with audiences in favor of films that carry an overtly political or social agenda. It’s perhaps why a takedown of Dick Cheney was nominated last year. And how a film about interspecies intimate relations won top honors in 2018.

On Monday, the Academy released a surprisingly balanced nomination list, with several crowd-pleasers among them. Even a few films that affirm Christian faith made the cut, though a few also missed the spotlight. Here’s a rundown of the good, the bad, and the snubbed.

Underground Railroad heroine Harriet Tubman came to life as never before in Harriet. It notably starts with a black church service and ends with the words of Christ. In fact, some say her Christian faith is portrayed as a superpower. After praying, she navigates past slave catchers.

“Tubman was so certain that this is what had happened to her,” said director Kasi Lemmons in an October interview. “It’s absolutely the way she presents her story, without faltering. I went through a process with it and ultimately decided I was going to take her word for it and take her point of view.”

While the nod for Best Actress matters, Cynthia Erivo is more excited about the Best Original Song award. She is up for both of them. She would become one of few EGOT (Emmy, Grammy, Oscar, and Tony awards) winners if she takes it home.

The sort of silver screen experience Hollywood rarely makes anymore, Ford v. Ferrari highlights American ingenuity in a high-stakes race. It’s a clash of wills between friends. It’s two titans of the industry determined to out-innovate. It’s one family pulling together for a common goal.

3. A Beautiful Day in the Neighborhood (Nominated for Best Supporting Actor)

Tom Hanks has portrayed American icons Walt Disney and Captain Sully in recent years. But he hasn’t been nominated for an Oscar since Cast Away released 19 years ago. Now his nomination for portraying children’s TV host and educator Fred Rogers will lead to new interest in the unique biopic.

A Beautiful Day in the Neighborhood gives audiences something different than expected. It’s not a glossy look at the ordained minister who spent his life helping kids. It’s more playful yet also more challenging … which may be just what Rogers would want.

Louisa May Alcott’s 1868 novel Little Women features just four sisters. But there have been dozens of adaptations of it over the years. While producer Amy Pascal is known for edgy, modern fare, this latest take on it from her and director Greta Gerwig keeps the heart of the original story.

Producer DeVon Franklin knows how to make a splash with his movies. Starring Chrissy Metz (This Is Us) and Topher Grace (Interstellar), Breakthrough tells the true story of a teen boy who miraculously survives breaking through a frozen lake and drowning. A-list talent wasn’t just in front of the camera, as Franklin enlisted music producer Kirk Franklin for the soundtrack.

For starters, he revved up several worship choruses including “This Is Amazing Grace” and “Oceans.” Then pop songwriter sensation Diane Warren, known for such hits as “I Don’t Want to Miss A Thing,” offered to contribute a new song, “I’m Standing With You,” which star Chrissy Metz recorded. It makes for an inspiring faith film that’s more than the sum of its parts.

This three-hour epic from director Terrence Malick highlights the little-known story of conscientious objector Franz Jägerstätter. The Austrian family man refused to take an oath of loyalty to the Nazis and suffers the consequences. Capturing the wonder of rural life and towering European vistas, A Hidden Life deserved to be short-listed for Best Cinematography.

When segregation persisted in a small North Carolina town, two fierce opponents dared to co-chair a community meeting. They were local mother and activist Ann Atwater (Taraji P. Henson of Hidden Figures) and KKK leader C.P. Ellis (past Oscar winner Sam Rockwell). With a standout screenplay, The Best of Enemies has timely messages about respect, listening, and daring to see across entrenched lines.

Unplanned depicts the dramatic exit of Abby Johnson from Planned Parenthood, after she sees firsthand a baby in the womb lost to abortion. Five years in the making, it’s a rare biopic that portrays both her personal and professional life. With a heartrending lead performance by Ashley Bratcher, Unplanned is controversial and eye-opening in its holistic view of life issues.

With 24 Oscar nominations, Netflix got a lot of love from the Academy. Amazon Studios, not so much — including their haunting documentary One Child Nation. It follows Chinese woman Nanfu Wang as she returns to her childhood home. Her mother, aunt, and family members open up about horrifying realities of China’s one child policy. We see newborns abandoned, tiny bodies in landfills, and the Communist regime redefining ethics to make it acceptable.

An original take on the classic Huck Finn river raft adventure, this coming-of-age tale finds two young grifters trying to quietly leave a small Carolina town for better luck. One is Shia LaBeouf, elevating this small project with his charm and star wattage. The other, Zack Gottsagen, uses his real-life struggle with Down Syndrome to inform his character’s journey.

It’s a story about the good and bad in every person, and learning how to deal with those moral choices. Sometimes bullies can be seen, though often the worst bullying comes from within.

Whoever wins at the Oscars on February 9, one thing is for sure. As competition grows fiercer for moviegoers, Hollywood ignores the diverse “faith and family” audience at its own peril. It’s clear from this year’s nominees that these types of films are very important.