Second in a two-part series on the growing evidence for intelligent design.

(Part 1 is here.) Scientism holds that researchers should consider only explanations fully consistent with atheism, whatever the field: Believe whatever you want in your personal life, but stick to methodological atheism in the lab. Scientism isn’t science, but thanks to clever marketing, many people assume it is. That confusion has allowed the dogma to infect every corner of academic culture and even spill over into our legal system. The good news is that scientism is highly vulnerable because it rests on a cherished progress narrative that is demonstrably false.

This grand progress narrative runs like this: Humans used to attribute practically every mysterious force in nature to the doings of the gods — lightning bolts, plagues, etc. They stuffed a god into any and every gap in their knowledge of the natural world, shrugged, and moved on. Since then, the number of gaps has been shrinking without pause, filled with purely material explanations. And all the movement is away from God and toward purely material explanations. The lesson: Always hold out for the purely material explanation, even when the evidence seems to point strongly in the other direction. Philosophical materialism, in other words, is our manifest destiny. Get used to it colonizing everything in the world.

An impressive tale, to be sure, but fictional.

Defenders of this progress narrative will point to this or that historical figure who mistakenly attributed a material and regular phenomenon to a divine action, such as an ancient culture attributing lightning bolts to an angry sky god. They will then act as if this historical instance proves their grand narrative. But their narrative holds that all the historical movement is in their direction — design explanations collapsing in the face of new, purely material explanations and never the other way around. But things have gone the other way round, and in at least two cases, spectacularly so.

We looked at one of those spectacular instances in Part 1: 20th century scientists came to realize that the universe is not eternal but had a beginning, and that its laws and constants are so finely tuned for life that multiple Nobel laureates have concluded that these findings point to a creative intelligence as the source for this finely tuned beginning.

That’s one cosmic-sized counterexample. A second important counterexample is physically small — microscopic really — but enormous in its significance: the origin of the first life.

Through much of the nineteenth century, many biologists assumed that living cells were pretty simple, little more than microscopic sacks of Jell-O. The scientific community also accepted the idea of spontaneous generation — the notion that creatures regularly sprang to life spontaneously out of things like dew and rotting meat. Taken together, these pieces of conventional scientific wisdom suggested that the origin of the first living cell deep in the past was hardly worthy of the term mystery. An adequate material explanation seemed obvious. 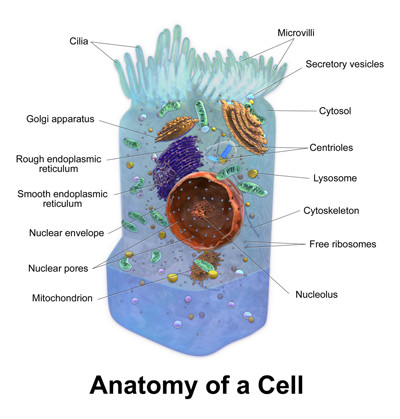 But in 1861 Louis Pasteur conducted a series of experiments that discredited the notion of spontaneous generation. And in the next century, scientists began amassing evidence of just how complex even the simplest cell is. The illustration to the left barely scratches the surface of a cell’s intricate complexity. Today we know that cells are microminiaturized factories of astonishing sophistication, and that such sophistication is essential for their survival. There’s no way to evolve this factory into existence bit by bit because countless intermediate stages would be inoperative on the way to a functional cell. In nature, inoperative things don’t survive and reproduce — necessary preconditions for Darwinian evolution’s process of random mutation and natural selection.

Darwinist Steve Matheson himself conceded, in a forum at Biola University with intelligent design proponent Stephen Meyer, that no adequate material explanation has been found for the origin of the first living cell. Indeed, so desperate are atheists for a favorable explanation that even leadings ones, including Richard Dawkins, have taken to theorizing that the first microscopic life on earth was seeded by aliens. (I’m not making this up.)

Think about this historical arc: Scientists were quite confident of having a solid materialistic explanation for the origin of life. Then they came to realize that spontaneous generation was a fantasy. Then they learned that even the simplest cells are highly sophisticated, information-rich organisms. And now, after generations of assiduous research, the only type of cause investigators have ever witnessed actually producing novel information is intelligent design — that is, minds creatively assembling things. So, modern scientific observations collapsed a long-standing materialistic explanation for the origin of life and simultaneously strengthened the competing intelligent design explanation.

Here, then, is a second major scientific development that runs contrary to scientism’s revisionist history of science. The origin of life joins the origin of the universe in giving the lie to scientism’s grand progress narrative.

Giving up on Scientism

A common rejoinder is that inferring design in such cases amounts to “giving up on science” and that science should always hold out for a purely material explanation. But if the dogma of scientism is the subject of the debate, as it is here, you can’t invoke the dogma of scientism to settle the debate. In logic such a dubious tactic is called the fallacy of begging the question. The tactic doesn’t get any less fallacious if the person committing it is wearing a lab coat and yelling “Science!” or “Denier!” at his opponent.

Think about it: What if the first living cell really were the work of intelligent design? Being open to that possibility and following the evidence where it leads isn’t giving up on science but on scientism, a dogma resting on a progress narrative flatly contradicted by the historical record.

Scientism’s grand progress narrative holds that as we learn more and more about the world, purely natural or material explanations will inevitably arise and grow stronger, while design arguments will inevitably collapse under the weight of new discoveries. But the opposite has happened in cosmology and origin-of-life studies. Despite these developments, the disciples of scientism go right on recycling their grand narrative as if it were the whole truth and nothing but the truth. 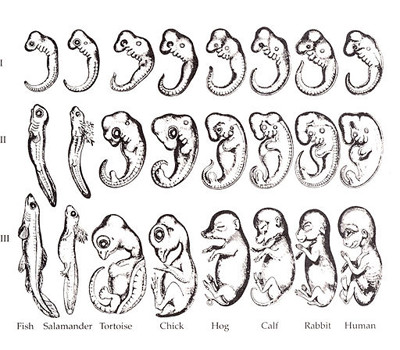 There’s a parallel to this tendency on another level of the origins debate. In his 2002 book Icons of Evolution, biologist and Darwin skeptic Jonathan Wells chronicled how Darwinists persistently recycle cherished bits of pro-Darwinian evidence even after the evidence has been widely discredited in the mainstream scientific literature. For example, the fudged embryo drawings of nineteenth-century evolutionist Ernst Haeckel supposedly show how an embryo’s development in the womb repeats in miniature the species’ gradual evolution in the distant past. Those drawings continue to crop up in support of Darwinian evolution, despite having been dismissed long ago even by mainstream evolutionary biologists.

Why do these fudged drawings and other discredited icons of evolution keep cropping up in science textbooks? Because they’re striking and easily understood, and because Darwinists are desperate. As long as the students of the classroom keep their eyes on the show and don’t peek behind the curtain, they’re likely to go away impressed. In this way the icons of evolution play a crucial role in selling Darwinian materialism to each new generation.

As important as those icons are rhetorically, there stands behind them a more basic icon, one we might call the Icon of Materialism. I’m referring to scientism’s grand progress narrative, the one that says materialistic explanations have been steadily sweeping aside one design argument after another in an unbroken and inevitable march of historical inevitability. It’s a story as fudged, as touched up, as Haeckel’s embryos, since it airbrushes into oblivion important counter-examples, such as the origin of the universe and the origin of life. 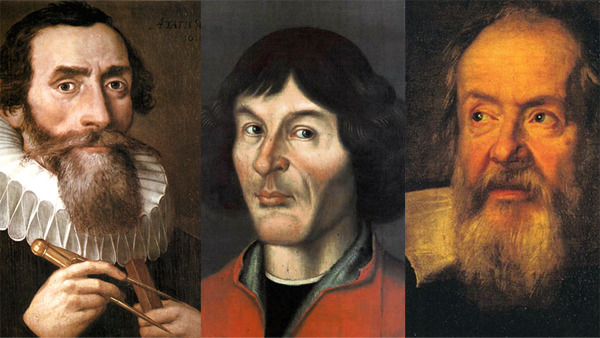 Portraits of Kepler, Copernicus and Galileo.

Actually, the birth of science itself doesn’t fit comfortably with scientism’s grand progress narrative. Certainly, researchers continue to gain new insights into how material forces cause various things in nature, and that’s a good thing. But the insight that we live in a world with underlying laws and constants, which can be profitably investigated isn’t controversial. More than this, the idea was encouraged by the Christian belief that nature is the rational and orderly work of a divine mind. It spurred Christian theists such as Copernicus, Galileo and Kepler to go looking for the underlying order of nature. In the process of looking for that underlying order, those men launched the scientific revolution.

The theistic commitments of those early men of science were crucial to the birth of modern science. It’s now well-established among historians of science that modern science is largely a Christian invention, and one substantially based on theological ideas. In this we have perhaps the most obvious contradiction to scientism’s cherished progress narrative, since on their telling, the early “theological stage” of science is supposed to be the most primitive and useless.

What really happened? Many later scientists abandoned science’s fertile theological heritage, insisting that science should trade only in hypotheses consistent with atheism. They sought “to create,” in the approving words of Harvard geneticist Richard Lewontin, “an apparatus of investigation and a set of concepts that produce material explanations, no matter how counter-intuitive, no matter how mystifying,” even to the point of tolerating “unsubstantiated just-so stories” if necessary.

This dogmatic thinking may help explain how some nakedly misleading arguments against intelligent design continue to circulate among the proponents of scientism. I discuss three of them in an earlier version of this present two-part essay that appeared in Touchstone magazine. And design theorist William Dembski and I tackle several of them in our InterVarsity Press book Intelligent Design Uncensored. But the most basic, most cherished mischaracterization involves labeling intelligent design an argument from ignorance. In reality, the intelligent design argument is based on people’s uniform experience of designed systems and on our knowledge of the cause-and-effect structure of the universe. It is, in other words, an evidence-rich argument.

The argument-from-ignorance charge is just another diversion, one designed to distract people from noticing what should be obvious: scientism’s grand progress narrative is bogus. It is presented as scientism’s glorious garb, but really the emperor has no clothes.

What’s the takeaway? The proponents of scientism want to shut us up, but go ahead and be the little boy in the tale who points out the obvious. Doing so presents an opportunity to beckon both science and the broader culture back toward a richer, and more reasonable, understanding of reality — one willing and able to see with the poet that the “world is charged with the grandeur of God.”