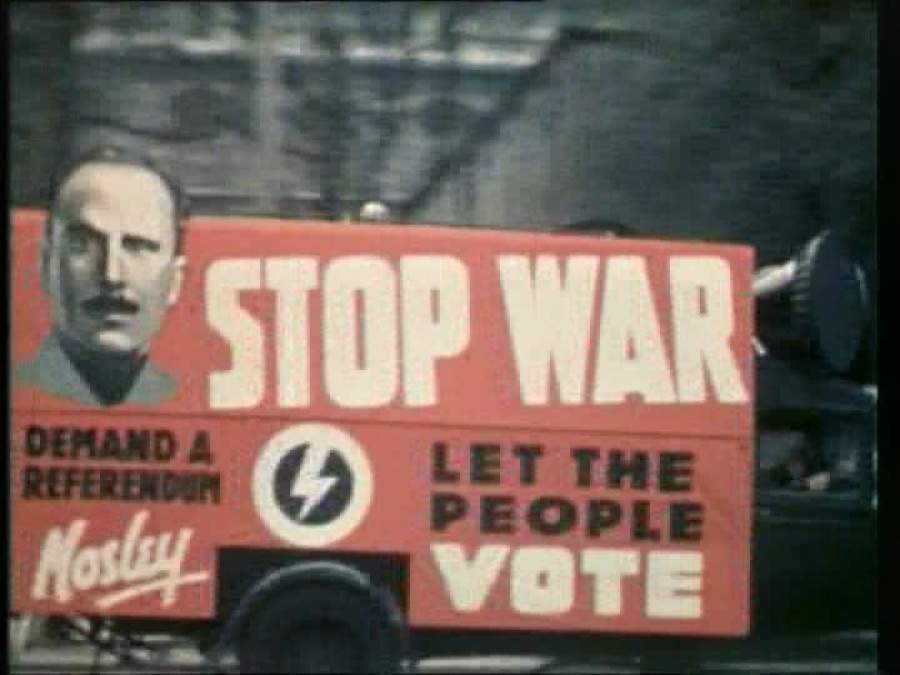 A peace ad from Oswald Mosley's British Union of Fascists in the late 1930s.

“Blessed are the peacemakers, for they shall be called sons of God.” (Matt. 5: 9) That’s a pretty straightforward statement, but like most of Jesus’ teachings, it isn’t simple. We find it easy, and cheap, and emotionally satisfying, to wield such words as a truncheon. Especially if we oppose a given conflict for reasons of our own.

Sir Oswald Mosley, in the 1930s, led the British Union of Fascists. He favored dictatorship and government control of the economy over parliamentary democracy and economic freedom. He took money from Mussolini to pay for his bullyboys’ black shirts and truncheons. When Hitler’s aggressions against his neighbors provoked talk of war in Britain, Mosley sponsored “Peace Rallies.” He condemned “warmongers” like Winston Churchill. He called for “peaceful coexistence,” and doubtless cited that bible verse in his propaganda.

After August 1939 do you know who joined Mosley’s campaign? British Communists, whose foreign master Stalin had allied with Hitler in the Molotov-Ribbentrop Pact. They did all they could to disrupt Britain’s increasingly lonely fight against Nazi totalitarianism, right up to the very day when Hitler turned on Russia. Then, of course, they pivoted right back to urging a crusade against fascism.

Another pacifist of convenience was Dorothy Day. A longtime Communist whose conversion to Catholicism didn’t quite burn that evil out, she condemned the U.S. declaration of war against Japan after Pearl Harbor. She put out pacifist arguments all through the Cold War, urging the U.S. to abandon South Korea to conquest, for instance. But when violent rebels like Ho Chi Minh and Fidel Castro used violence to establish Communist regimes, she never condemned them. Instead, she urged Catholics to seek common ground with Communists.

Large segments of the antiwar movement during the Vietnam war crossed the line from condemning U.S. intervention as unwise to supporting our Communist foes. No American of that era will ever forget “Hanoi Jane” Fonda broadcasting propaganda on behalf of the aggressive totalitarians based in that city. Even after U.S. troops were long gone, Democrats in Congress refused military supplies to our allies in South Vietnam and Cambodia, each of which fell to murderous dictators.

Today, of course, some on the left go far beyond warning against a full-scale regime change war with Iran. Some echo propaganda of that theocratic regime. Other “peace” activists hypocritically condemn President Trump’s clean, surgical strike, when they ignored Barack Obama’s deadly, civilian-killing drone attacks.

All of this is to say that talk of war is fiendishly complicated. There is no “pure” Christian position floating out there in ether, crystal clear and perfect, and easy to apply. In the world that Adam left us after the Fall, we will always face ugly trade-offs, tragic sacrifice, and crude approximations of the Good. That’s the best we can expect until Christ restores the New Jerusalem, and the lion lies down with the lamb.

We already have one Afghanistan on our hands. We can’t afford another.

It seems that President Trump’s drone strike targeting Iranian warlord Qasem Suleimani has proven prudent. Iran retaliated with a missile attack against U.S. forces in Iraq that succeeded in killing no one. Let’s hope that this proves sufficient for Iran’s regime to save face, and armed conflict can cease. Whatever the sophomoric fantasies of neocon armchair admirals, the U.S. has no interest or business attempting regime change in Iran. We already have one Afghanistan on our hands. We can’t afford another. If President Trump delivered us one, it would guarantee a catastrophic Democrat landslide in 2020.

It’s very good news so far, from a Christian perspective, that neither side has targeted civilians. The first concern any believer must have in any conflict is that non-combatants be spared as much as possible. That’s something both sides forgot in the Second World War, though of course the Axis’ record was infinitely more vicious.

In war-making as in every other area of human life, we find virtue not at one extreme or the other, neither in pacifism nor militarism. Instead, we must look for the Golden Mean, which balances the legitimate claims of every good God made and asked us to steward. I wrote a whole book on the quest for the Golden Mean, The Bad Catholic’s Guide to the Seven Deadly Sins. Its key message is here:

“As Aristotle noted, and saints were quick to follow him, the Golden Mean of virtue hangs in tension between two extremes. We can overcorrect against each one of the Deadly Sins, and end up in an opposite sort of sin. …

“Sloth is not so much a sin of laziness but of apathy, of the sort that can lead to despair. The Diligent learn how to apply themselves with sane resignation, and a realist’s appreciation of their limitations and weaknesses — while Fanatics hurl themselves headfirst into walls, torment the people who love them, and if they don’t blow themselves up, they burn out and slump into … Sloth.”

Trump Has Been Prudent So Far

Just so, pacifism wallows in passive self-congratulation, while letting innocent people for whom we are responsible suffer evils. Militarism looks high and low for excuses to use deadly force to assert our own will on other people. Threading the needle between these evils isn’t easy, formulaic, or simple. It’s the function of statesmanship.

And so far, on this count, President Trump has done a better job than his predecessors. George W. Bush recklessly and heedlessly rushed to judgment in Iraq, and sent our troops to Afghanistan without any exit strategy. Barack Obama, by contrast, over-corrected. He greeted our enemies and adversaries around the world with appeasement and apology, trying and failing to defang their hostility.

Let’s pray that the president continues to walk the narrow path that avoids such opposite evils. Let’s keep reminding him that “peace through strength” is more than a slogan. It’s the firm goal to which we adhere, in obedience to Christ.

John Zmirak is a senior editor at The Stream, and author or co-author of ten books, including The Bad Catholic’s Guide to the Seven Deadly Sins.