And baby butcher Kermit Gosnell gets a shout-out. 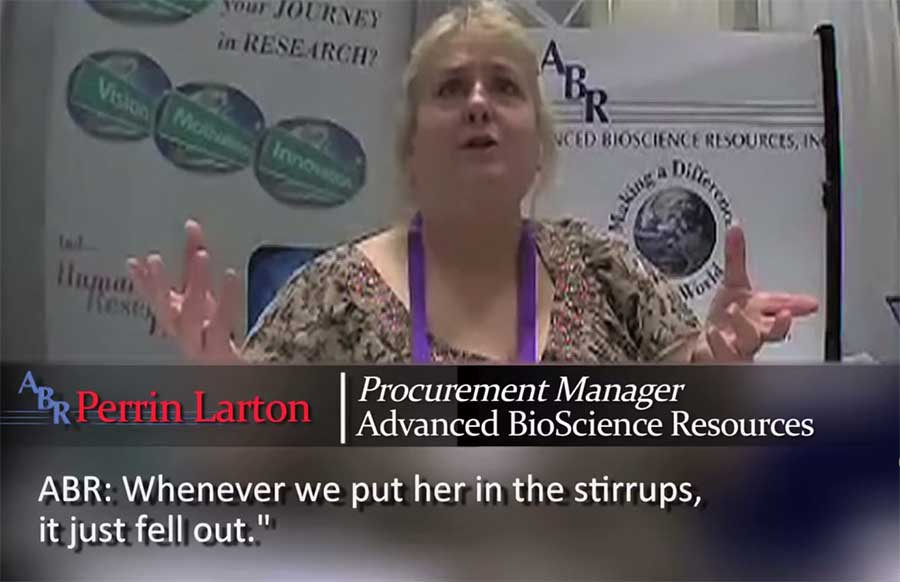 The latest Planned Parenthood sting video introduces us to a new player in the baby body parts industry: Advanced Bioscience Resources, Inc. (ABR), a small company that has trafficked human tissue from Planned Parenthood longer than any other entity.

The most damning testimony in the video comes from Perrin Larton, the Procurement Manager at ABR, who describes ABR’s fetal tissue harvesting practice to a prospective buyer. “I literally have had women come in and they’ll go in the O.R. and they’re back out in 3 minutes, and I’m going, ‘What’s going on?’ Oh yeah, the fetus was already in the vaginal canal whenever we put her in the stirrups, it just fell out,” she says, wide-eyed.

“Whenever we have a smooth portion of liver, we think that’s good!” says Larton. She tells stories with gruesome images of doctors pulling babies out “by the abdomen” and tearing up their chests and stomachs, which is distressing to her because they’re damaging that liver that she needs. “It really pisses me off.”

Larton says she regularly gets specimens as late as 21, 20 weeks, and that 18–22 weeks is a workable range for the tissues the buyers want to procure. She brags about having clinics in San Diego, Oregon and Minnesota, and expanding to New Jersey and Philadelphia, but “not in Dr. Gosnell’s clinic, though. The whole point is not to have a live birth.”

Her awareness of Kermit Gosnell’s infanticide practice suggests that she knows what’s not supposed to happen (but sometimes still does).

Jockeying for a Piece of the Action

StemExpress got different specimens because they were for-profit and paid well. This video features clips of Cate Dyer, CEO of StemExpress, explaining how she competes with ABR for abortion clinics’ business. According to the Center for Medical Progress, Dyer used to work as a procurement technician for ABR before founding rival tissue procurement company StemExpress.

Dyer shares some of the financial details of ABR: “They were funding places in Hawaii for themselves,” she divulges. “Some staff — not that I know so much on the Planned Parenthood side, but I wouldn’t be surprised — there are some staff in the past that have been on the payroll with ABR.”

According to Dyer, ABR would pay an “advisor fee” to a clinic manager or director in order to preserve their exclusive right to harvest fetal tissue at that location. “There’s like, well enough known,” says Dyer, that “for a long time there were certain clinics that because they had paid advisors that were sitting on boards for these clinics, that were also an advisor to ABR, you were just never going to go anywhere with them, you know what I mean?”

The undercover video includes a conversation with Dr. Katharine Sheehan, the long-time medical director of Planned Parenthood of the Pacific Southwest until 2013. Sheehan tells actors that they have an established relationship with ABR: “We’ve been using them for over ten years, really a long time, just kind of renegotiated the contract. They’re doing the big collections for government-level collections and things like that.”

At one point one of the undercover actors begins to negotiate with Sheehan, and she starts to take the bait. “We return a portion of our fees to the clinics,” Sheehan responds eagerly, “Right, get a toe in and make it, make a pro–.”

The profit motive for the sale of baby body parts is clear.

If the profit motive weren’t clear enough before, it should be now. Obvious conflicts of interest arise when you have tissue procurement companies, the vultures of human body parts, on the board of an abortion clinic that supplies their human body-part needs. It’s enough to make “procurement technicians” look the other way when infants are born alive and intact, to avoid but not investigate someone like Kermit Gosnell, and to celebrate every “smooth piece of liver” they can harvest from a child who was destroyed for their benefit.