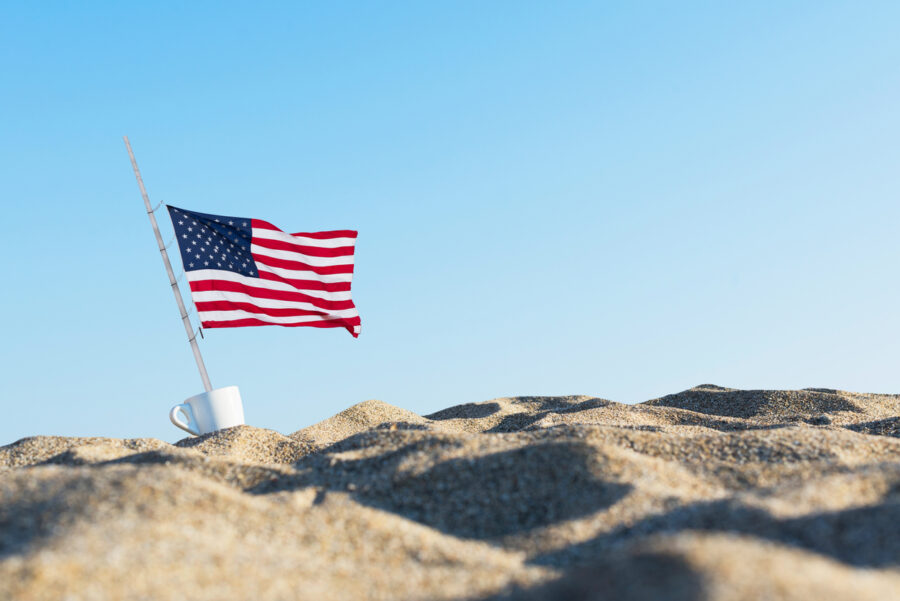 Put that Brew in a to-go cup because we’re going to move quick.

Donald Trump is heading to the southern border today, right into the heart of the Rio Grande Valley which is being overrun with illegal immigrants. In fact, according to the Washington Examiner, there’s been yet another uptick in the number of unaccompanied children (in other words, victims) being found in the past week. This suggests a summer wave is on its way.

But don’t worry. Kamala had her photo op Friday. All is well.

Trump will be hitting the border with Texas Gov. Greg Abbott. The two will later hold a town hall, which airs 9 p.m. eastern on Hannity’s Fox News show.

The state of Texas, at Abbott’s direction, is taking on building the border wall itself. Abbott tweeted Monday that work is underway.

Building the border barrier has begun.

The 1st step is to get easements on land.

The 2nd step is to clear the land for the building process.

That is what is happening here.

The Texas Facilities Commission is working to hire a program manager to oversee the entire process. pic.twitter.com/n9JUN0CymL

Meanwhile, several states, the latest being South Dakota, are sending forces to Texas to help the state quell the flood of illegal immigrants. Securing a border the administration is working to erase.

How Many More People Died Because of TDS?

A former member of the White House COVID Task Force says scientists didn’t only shun treatments and ideas Trump touted, which was reckless endangerment of the public health. They shunned scientists and researchers working on the Task Force. Dedicated public servants giving their life to trying to save America, and the world, from a dangerous virus, in one of the very best places to do that. You want influence? Join a White House task force. It’s what the serious scientist will do, whoever’s president.

Dr. Brett Giroir, who was on the White House COVID Task Force, testified today about the origins of COVID. He agrees it was most likely the Wuhan Lab. But more horrifyingly, Dr. Giroir spoke of how scientists were so spiteful of Donald Trump, that they ostracized scientists and researchers who had anything to do with Trump or ideas/treatments he discussed.

Watching Dr. Giroir, you can’t help but wonder just how many tens of thousands of Americans died because of the science community’s personal animosity toward the President of the United States.

“Sure, your grandmother is dead. But at least Trump’s not getting credit for touting the treatment that could have saved her.” Think that’s too harsh? Then you probably think it was just happenstance that Pfizer waited until a couple days after the election to announce the first successful vaccine.

A shocker from Tucker Carlson Monday night. He claimed the government is spying on him with the aim of forcing him off the air. In his words:

“Yesterday we heard from a whistleblower within the U.S. government who reached out to warn us that the NSA, the National Security Agency, is monitoring our electronic communications and is planning to leak them in an attempt to take this show off the air.”

It is illegal for the NSA to spy on American citizens. So how does Tucker know the whistleblower isn’t whistling “Dixie”?

Carlson explains: “The whistleblower, who is in a position to know, repeated back to us information about a story we are working on that could have only come directly from my texts and emails. There’s no other possible source for that information, period.”

White House press secretary Jen Psaki was asked about it Tuesday. She did not say “No.” She did not say, “I hope not. That would be illegal.” Instead she hemmed and hawed her way through a worthless response about how the NSA targets foreign threats. She then said the question should be put to the “intelligence community.” Which, of course, is known for being forthcoming.

LISTEN: Psaki addresses Tucker Carlson's claims that the NSA is "spying on him." pic.twitter.com/mUVBs1znfl

It’s crazy to think the Biden Administration would be using federal agencies to sabotage Tucker. That’s as crazy as, say, using the IRS to sabotage the TEA Party. Or, even nuttier, using FISA courts to spy on your political opponent based on a fiction created by your preferred candidate.

For more on the Tucker story, check out Mike Huckabee’s summary “Tucker Carlson Receives Alert: Government is Spying on You.” He wonders if the interest in Tucker is connected to Tucker’s interest in challenging the “Insurrection” narrative of January 6.

69-Year-old Woman Charged With Unlawful Entry at US Capitol January 6 … So Why is Capitol Hill Cop Holding the Door for Her?

Lois Lynn MicNicoll was charged Monday for Insurrection in connection with the January 6 riot. Well, actually she wasn’t arrested for that, despite us being told for six months there was an “insurrection.” She was only charged with “knowingly entering or remaining in any restricted building or grounds without lawful authority and violent entry and disorderly conduct on Capitol grounds.”

Violent, unlawful? Then, as Gateway Pundit notes, why is there a shot in the photo packet released by the feds showing a Capitol Hill officer holding open the door for her?

In a voluntary interview, McNicoll allegedly told the FBI that she knew about the U.S. Capitol’s barriers and security measures, but still claimed “she did not feel that she was doing anything wrong.”

She also confused the crypt for the rotunda.

Want to laugh? Maricopa County, which has been teaming with an army of Democratic lawyers and fixers to fight the Arizona Audit, announced it is dumping the Dominion machines used in the election. Why? Because they’re being examined for the audit and this “constitutes a cyber incident to critical infrastructure — an event that could jeopardize the confidentiality, integrity, or availability of digital information or information systems.”

And the laugher of the day: The county says it would “never use equipment that could pose a risk to free and fair elections.”

Do we need to trot out again all the MSM news reports before the election about how the machines posed a risk to free and fair elections?

It should be obvious why they are doing this. If the forensic audit of the machines turns up trouble, the Maricopa County hucksters want to be able to say, “You have to ignore the audit results because these people fiddled with the machines.”

Ask yourself this question: Would they be suggesting the machines are being compromised if they thought the forensic audit would show the machines were clean as a whistle?

Put another way: What would you be saying and doing if you knew the machines and the election were dirty? If it’s anything different than what the Democrats and Maricopa County have been doing, I’d love to hear it.

Meanwhile, a judge in Minnesota has ruled that MyPillow’s counter-suit against Dominion can proceed.

The Bad News: They told him he’s going for ice cream.

The Serious Bad News. His Energy Secretary Janet Granholm wouldn’t discount climate change as a culprit in the collapse. When asked by CNN about the role of climate change in the tragedy, she replied, “Obviously, we don’t know fully, but we know the seas are rising.”

Good News: First Lady Jill Biden is on the Cover of Vogue

Bad News: This is the same fashion magazine that spent four years deliberately snubbing the glamorous First Lady who had been a real-life supermodel.

The Real Bad News: How does Jill have time for a photo shoot and run the country?

Need to catch up on your Z’s? Don’t miss John Zmirak’s “‘Jesus Said Unto X, But I Say Unto You Not X’: Pope Francis as the Vicarious Christ.” Someone’s not going to be invited to the Vatican’s Christmas mass this year.

Also, Tom Gilson obliterates the notion of “religious neutrality” in the public square in “What You Can Do About State-Sponsored Blasphemy, aka the Doctrine of ‘Religious Neutrality’.” Yes, blasphemy is the word. See what Tom means.