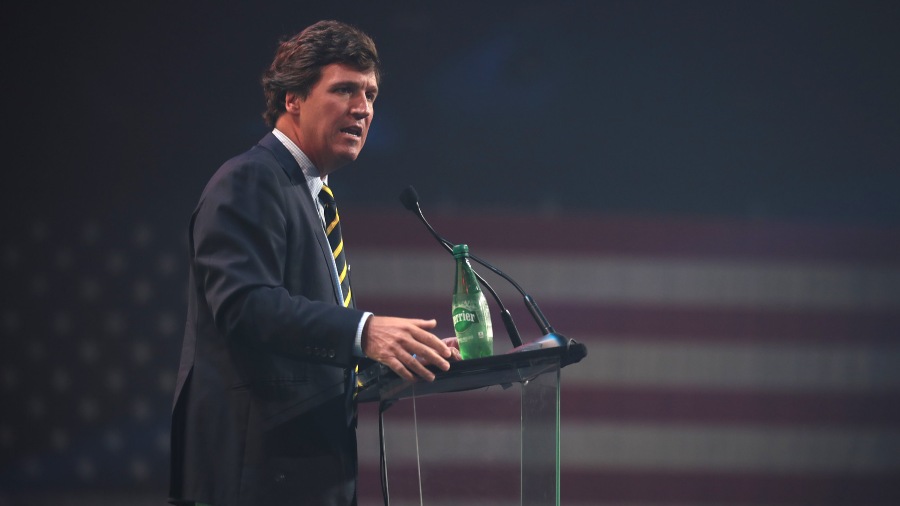 Tucker Carlson, on his show Monday night, told his audience that a whistleblower from inside the U.S. government reached out to his show with a warning that the National Security Agency has been spying on his show — specifically, their electronic communications — with the goal of taking him off the air.

This is a claim that should be met with skepticism, of course, no matter how capable we know the NSA is of doing this. It’s supposed to be illegal, even though we know for a fact they’ve done it before. But according to Tucker, this whistleblower, “who is in a position to know,” repeated to them information about a story that they are currently working on. This “could have only come from my texts and emails,” Tucker explained. “There’s no other possible source for that information.”

“The Biden administration is spying on us,” he said. “We have confirmed that.” And he noted that if the government is doing it to his show, they are surely doing it to others as well.

Carlson dropped his bomb quickly and moved on to other news, but not before saying he’d have more.

It was done without the show’s knowledge, and for political reasons. This, according to Tucker, is beyond any doubt. “They are definitely doing it to us,” he said. On Monday morning, they filed a Freedom Of Information Act (FOIA) request asking for all information that the NSA and other agencies have gathered about Tucker Carlson Tonight. He says they did this “mostly as a formality,” and that they also contacted the press offices of the NSA and FBI, although they “don’t expect to hear much back.”

“Only Congress can force transparency on the intelligence agencies,” he said. “And they should do that, immediately. Spying on American journalists is incompatible with democracy.”

Very true, but tell that to Sharyl Attkisson, who has maintained for years that her computer was hacked while she was at CBS News and investigating the Obama-era Operation Fast and Furious.

And tell it to former FOX News Chief Washington Correspondent James Rosen, who was also spied on, while he was reporting on North Korea. To get an FBI search warrant, they falsely said he was a criminal co-conspirator in an alleged violation of the Espionage Act.

Carlson dropped his bomb quickly and moved on to other news, but not before saying he’d have more. In the meantime, let’s take a look at what this means.

An Illegal Enterprise with Political Goals

RedState.com already has a report on this, which points out that this appears to be the first time since Biden became president that someone within the administration has leaked information to a news outlet about illegal and/or objectionable actions taking place inside government. Leaks happened to a ridiculous degree while Trump was President, with Trump-hating officials within the intel bureaucracy regularly leaking to The New York Times and The Washington Post. This scenario is different.

The RedState piece clarifies a couple of Tucker’s claims. First, they say it’s not quite correct to say his show has been singled out for spying by the NSA, because “the NSA ‘spies’ on everyone all the time.” (That should make us all feel better.) It monitors and records just about every form of electronic communication and stores it in massive database locations. The NSA, as they describe it, “rides the structural ‘spine’ of the internet, copying data as it passes through.”

So that’s not really the “spying” part. Data collection is just what makes the spying possible. The actual spying happens when intelligence agencies request specific information to be retrieved and given to them. Of course, when they want to spy on an American citizen, they’re supposed to go through a legal process to do this, like falsify information to include in a FISA warrant so they can get court approval, haha.

It’s possible that some intelligence agency went through the FISA process to gain access to Tucker’s communications, but as the RedState piece says, “It’s hard to come up with any kind of plausible ‘legal’ scenario involving a subject matter that might involve [spying]…The fact that a whistleblower reached out to Carlson to alert him to what was happening and communicated to him that the motives behind the acts are political lends substantial credence to the idea this is an illegal enterprise being conducted for political goals.”

A Challenge to the Phony January 6 Narrative

One topic that might cause the FBI to want to spy on Tucker — and find out what he has — is the story he was reporting right before dropping this bomb. It was about receiving confirmation from inside the FBI that the FBI had “sources” or “informants” in the crowd on January 6. That’s really nothing to be surprised about, as of course we know they did, but Tucker concluded on the air Monday that “the FBI knew what was going to happen.” RedState points out that it’s impossible to conclude that unless one knows what specific information the FBI had received from their informants, but maybe Tucker did know that. And maybe the FBI was looking at his text messages to find out if he did. Of course, they’d also look to find out who leaked.

The intel bureaucracy is back to being pretty much what it was under Obama, as it’s by and large the same old crowd. At the same time, there are bound to be career FBI officials who are disgusted with the way they see it operating today — people within the ranks who are quietly just as anti-Biden as the leakers during the Trump administration were anti-Trump. They want to be able to take pride in that institution, and they don’t like what they see the Obama and Biden administrations doing to it. So, in this case at least, they’ve sent out a warning to one targeted reporter.

Now we have to find out what this operation is and who’s been involved. It’s possible Tucker knows this, and if he doesn’t, he likely will soon.

Victoria Taft at PJ Media has a piece on this as well, in which she reports that there actually were two whistleblowers involved in warning Tucker. She also notes that his show “is indisputably the top program across all cable stations in the time slot.”

The Biden administration has a huge stake in maintaining the lie that Trump supporters who attended his January 6 rally or who question even slightly the 2020 election are “white supremacists” and “domestic terrorists.” Anyone whose reporting challenges or complicates that phony narrative is a threat. And that’s just what Tucker is doing, throwing a big wrench into the works with his suggestion that the FBI was actually involved in encouraging the January 6 “insurrection.” He insists that the FBI had prior knowledge of the riots at the Capitol that day.

This is a developing story; we should find out more this week.