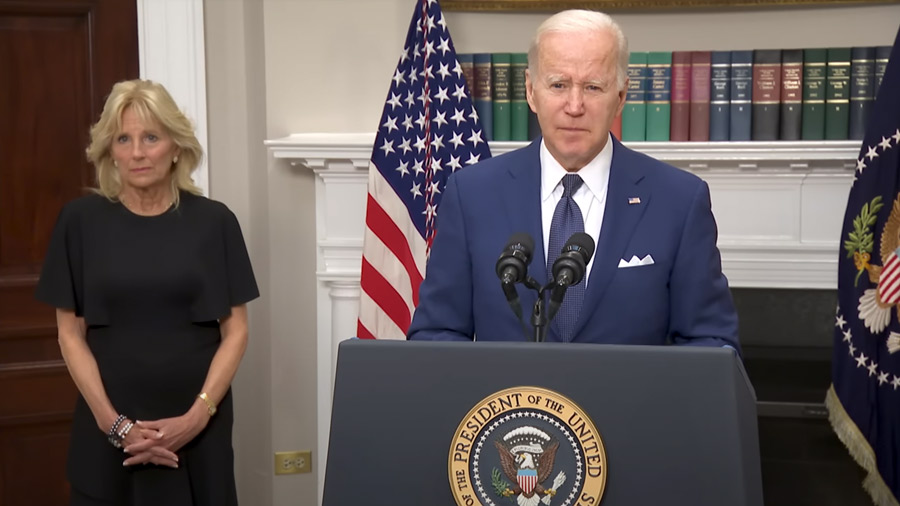 If you haven’t already, I encourage you to read Michael Brown’s article, When It Comes to School Shootings, America Really Has a Deeply Tragic Problem (and the other great pieces on The Stream by the time you’re reading this). To piggy-back on those articles, I would like to offer some more perspectives and a few possible solutions, which Dr. Brown and others rightly refrained from, being in the immediate aftermath of the tragedy.

Too bad President Biden didn’t have the same discipline in his speech last Tuesday. Two minutes and twenty-one seconds into the speech (only 6 seconds more than Katie Ledecky’s best time in the 200m Medley), Biden began a politicization rant for political points.

I must say, the first 2:21 was good, and he spoke with a solemn tone (but some critique on even that in a minute). He even cited Psalm 34:18 and a call to pray for “the strength in the darkness they feel right now.” That’s what a president does in time of national tragedy … unite the country to mourn together. I would love to leave it right there, giving credit to whom credit is due, but those few good seeds he sowed in the first 2:21 were plowed up in the last 4:47 of the speech.

Biden’s ‘Deer in the Headlights’ Look

As predictable as Nancy Pelosi using the phrase, “for our children” (although she applauds partial-birth abortions), Biden viciously went after our guns. “Deer aren’t running through the forest with Kevlar vests on, for God’s sake,” he said. Actually, Mr. President, our guns are to protect us from you and your cohorts if you overstep your bounds into tyrannical rule, not deer (albeit they are for good venison, too). That’s what our founding fathers had in mind in the Second Amendment.

Mason: The Force Behind Our Bill of Rights

George Mason attended the Constitutional Convention in 1787 but refused to sign it because he felt it gave the government too much power over the people. Toward the end of the Convention, he proposed that a bill of rights be included in the Constitution but was rejected. Four years later, the Declaration of Rights that he and his committee had written for his home state of Virginia (15 years prior) became the basis for the Bill of Rights.

So, Mason was probably the most dominant force behind the establishment of the Bill of Rights, and he once gave his definition of a “well-regulated militia.” He said, “That the people have a right to mass and to bear arms; that a well-regulated militia composed of the body of the people, trained to arms, is the proper natural and safe defense of a free state.” He also said, “I ask, sir, what is the militia? It is the whole people except for a few public officials.”

All indications point to the fact that the 18-year old shooter, Salvador Ramos, was a troubled kid with mental issues. The New York Post reported Tuesday night:

“At one point, he recounted, Ramos showed up at a park with scratch marks across his face and said he had been attacked by a cat. ‘Then he told me the truth, that he’d cut up his face with knives over and over and over.’”

There are already laws on the books prohibiting a mentally ill person from obtaining a firearm. The Democrats have had total control of the White House, the House, and the Senate for the last 16 months. Instead of ranting about new gun laws, why haven’t they figured out ways to enforce the laws we have? AG Garland, why haven’t you been focused on ways to better enforce them instead of going after parents at school board meetings and prosecuting mere trespassers from January 6?

What are the Solutions?

The answer to cars speeding on our highways is more cars — equipped with radar, flashing lights and sirens. And the answer to the gun issue is not less guns but more guns — in the hands of teachers and administrators who volunteer, much like the Federal Flight Deck Officer program in the airline industry. After 9/11, using the Left’s logic, we would have banned airplanes, since four airplanes were used as weapons. But the airplanes didn’t cause the 9/11 attacks, no more than a car killed people in the Waukesha Christmas parade (although CNN insisted it was “a car” that was responsible). It was the evil people who took control of them.

Moreover, we must invest monetarily in the safety of our schools. The latest $40 billion aid to Ukraine alone, divided up amongst the 130,930 K-12 public and private schools in the United States (2018 data) would be $305,000 per school! That’s a lot of money and would go a long way toward reconfiguring schools for single entry, bulletproof glass, armed officers, and arming volunteer teachers and administrators. I agree that Putin is a monster, and I’m not against aid to Ukraine, but shouldn’t the safety of our kids be a greater priority?

According to a 2021 audit report by the Government Accountability Office, we wasted over $600 billion on improper payments and tax fraud. And Senator James Lankford, R-Okla., released a list of wasted funds that included $500,000 to revamp a New Hampshire ski club, the infamous $30 million grant program offering “safe smoking” crack pipe kits, and even $15,000 for funding an opera about monkeys.

I promised a little critique on the first 2:21 of Biden’s speech. I know, I said it was “good.” And it was, so what’s my beef? As I watched him with such a solemn demeanor and seemingly so much concern for dead American children (whether genuine or contrived), I couldn’t help but to think, “Mr. President, where is your concern for the more than 100,000 deaths of our American youth by Fentanyl coming across your open border?

Samson defended himself against a thousand Philistines with the jawbone of an ass (and God’s supernatural strength), and he killed them all (Judges 15). Had the Democrats been organized back then, I’m sure they would have been screaming, “We need more jawbone of an ass control!”

During Jesus’ last Passover meal (“The Last Supper”), right before going to the cross, He said to His disciples, “If you don’t have a sword, sell your cloak and buy one” (Luke 22:36). In other words, “Arm up, boys! You’re going to need it after I’m gone.” And we still do. But we must take measures to protect our schools.