Since the start of the pandemic, Major League Baseball's handling of COVID-19 has been consistently inconsistent. 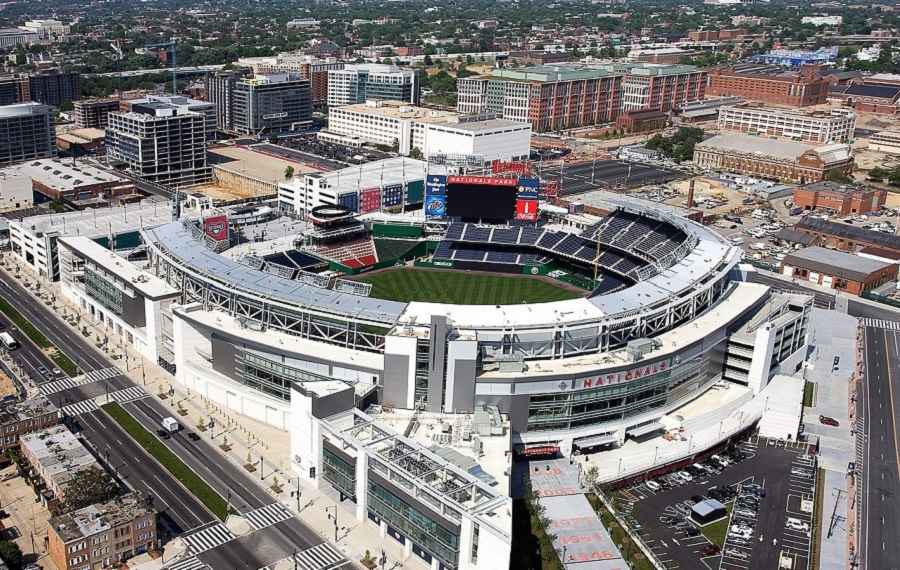 An aerial view of Nationals Park, the home of Major League Baseball's Washington Nationals since 2008.

What exactly are those protocols? Just like last year, MLB and its public relations machine seem to be making it up as they go along.

The last game of the 2020 MLB season – Game 6 of the World Series – was allowed to finish even after league officials were made aware of a positive coronavirus test by Los Angeles Dodgers third baseman Justin Turner.

“We learned during the game that Justin was a positive,” MLB commissioner Rob Manfred said at the time, as quoted by NBC News. “He was immediately isolated to prevent spread.”

Turner wasn’t “isolated” for long. Shortly after the Dodgers won the game and series, Turner returned to the field, where multiple cameras captured him lowering his mask. The player later apologized, but was not punished.

While MLB officials were quick to cite “contact tracing” and “an abundance of caution,” the league would have a hard time explaining why those same standards weren’t applied to a World Series game after it became known that a COVID-19 positive player had been on the field for hours. New York Post sportswriter Joel Sherman – who is also employed as an MLB Network “insider” – did tweet out some revisionist history, though.

MLB was doing great handling COVID last yr until literally last WS game (Justin Turner). Doing great thru spring, but now #Mets–#Nationals opener postponed due to Nats’ COVID cases. A reminder that we shouldn’t need that the virus is still with us.

Sherman, who later tried to walk back his initial tweet, is wrong about Major League Baseball’s “great handling” of the pandemic before the 2020 World Series. There were two major coronavirus outbreaks affecting the Miami Marlins and St. Louis Cardinals, dozens of postponements that disrupted an already severely shortened 2020 schedule and most importantly, a COVID-19 related heart ailment suffered by Boston Red Sox pitcher Eduardo Rodriguez. Thankfully, Rodriguez has made a full recovery.

Money – not safety or competitive integrity – has long been the dominant concern for Major League Baseball under its embattled commissioner. Stopping a World Series because of COVID-19 would have cost the league millions of dollars and exposed the fact that Manfred’s MLB never really had a handle on the pandemic to begin with. As 2021 gets underway with another coronavirus-related postponement, the league clearly can’t afford a two-team outbreak to derail what it hopes will be a full and profitable 162-game season.

If the exact same scenario we saw Thursday unfolds before or during another World Series game this October, can anyone predict with a straight face that the league’s solution would be anything other than “play ball?”

Some might say I’m cynical, but rest assured that I love baseball and have come to despise writing about the sport’s handling of COVID-19. After what seemed like a largely successful 2021 Spring Training, I sincerely hoped MLB had finally figured things out. We only made it a few hours into Opening Day before it became clear that MLB’s COVID-19 policies are still full of confusing contradictions, as was pointed out –to his credit – by Washington sports and MLB Network talk radio host Grant Paulsen.

Just got a text from an MLB player wondering why Nats-Mets is getting PPD rather rhan the alternate site players being used as replacements in the game tonight.

I can't answer that. It seems like that is the entire point of the alternate site.

Indeed,  why have an “alternate site” full of available players if one positive test can postpone a game? If those alternates are also at risk of exposure, is it because they traveled with the primary players? If so, why was that allowed? It reminds me of MLB inexplicably allowing planes full of baseball players to fly from the Dominican Republic to the United States last year despite none of them being tested for COVID-19 first.

I want America’s Pastime to overcome the incompetence of its bumbling commissioner and have a safe and exciting year. Unfortunately, Thursday was strike one for the springtime dreams of many lifelong fans like me: a full and fair 2021 baseball season.