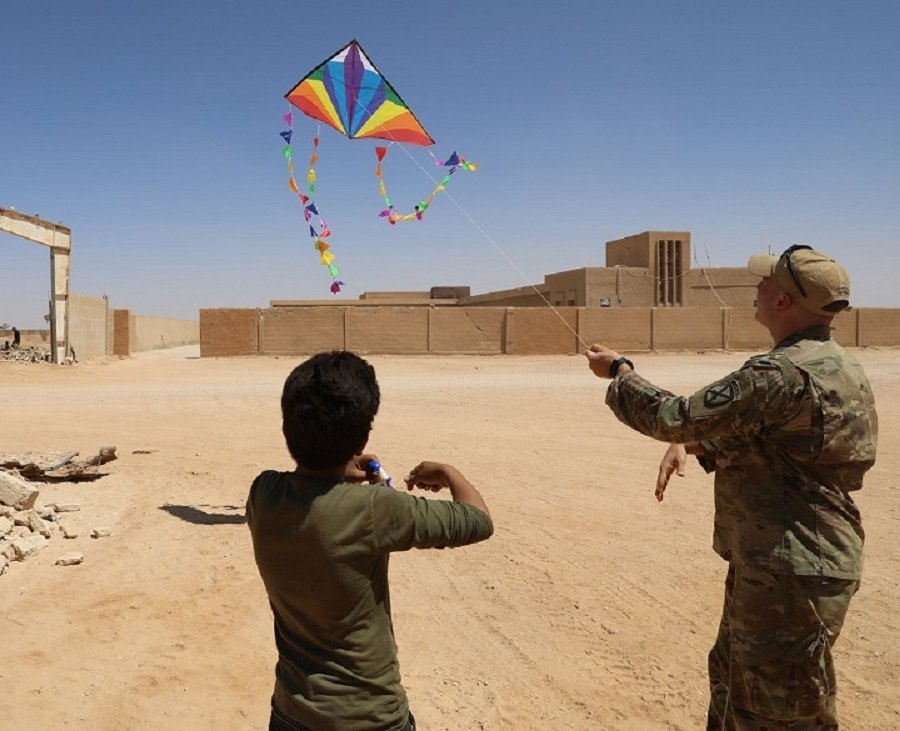 A U.S. Army soldier comforts a Syrian boy by flying a kite with him after an attack at Al-Tanf Garrison on August 15, 2022.

According to the Military Times, the harrowing day started with an attempted enemy drone strike on Al-Tanf Garrison, which is near near Syria’s border with Iraq and houses U.S. troops. It was shot down at about 6:30 a.m. local time without any damage or injuries. A second explosive-laden drone “detonated within a compound used by Maghaweir al-Thowra, a U.S.-backed Syrian opposition group,” according to the report.

More than 12 hours later, rockets began landing at a second base that houses American troops known as Green Village, which is in northeastern Syria. The U.S. military called it an “attack on coalition forces and our partners” and added that the rocket strikes also endangered local Syrians.

“Thankfully on this occasion, there were no casualties and no damage reported,” Maj. Gen. John Brennan said in the statement embedded below. “However, attacks like this risk both the lives of innocent civilians and important infrastructure due to their indiscriminate nature.”

In response to the attacks, the Syrian government laughably called upon the U.S. military to end its mission to fight the remnants of ISIS and leave the country. Newsweek noted that “no evidence was provided” to support Syrian claims that American troops are stealing Syrian wheat and oil.

“It is unclear who is behind the attacks, but previous incidents have been blamed by the U.S. on pro-Iranian militant groups,” the report added.

Following the attack earlier this week, the U.S. military refused to back down as service members continued training with partners inside Syria.

Today, @MaghaweirThowra and #US_Forces conducted Combat #Life #Saver training to ensure all medics are trained and ready to respond to any threat we face. #StrongerTogether #USArmy #Al_Tanf #Rukban #Syria pic.twitter.com/OXp4dLkiEt

Please say a prayer for the brave American troops serving in Syria, as well as Iraq and other hotbeds of terrorism across the Middle East and around the globe.

Another 260 U.S. Army soldiers are heading to Europe to deter Russian aggression on the continent.

Stars and Stripes reports that the soldiers will deploy out of Fort Campbell in Kentucky, where the Army’s 101st Airborne Division is based. “Known as the ‘lifeliners,’ the brigade specializes in logistics and personnel services to support deployed forces,” the report noted.

About 20,000 additional American troops have deployed to Europe since Russia invaded Ukraine in February, bringing the overall number to about 100,000. As you can see below, the U.S. military is hard at work training with allies across the continent, including Poland.

Want to add some color to your week?

Check out this live-fire exercise with 🇺🇸 troops, which took place in Drawsko Pomorskie, Poland, where America’s forward-deployed corps in Europe train with our Allies and partners. #WeAreNATO pic.twitter.com/ARmObtcBFs

Please pray for all American troops stationed in Europe as Vladimir Putin’s brutal invasion of Ukraine enters its seventh month.

A group of U.S. Marines is back in California after serving a deployment aboard the USS Abraham Lincoln. 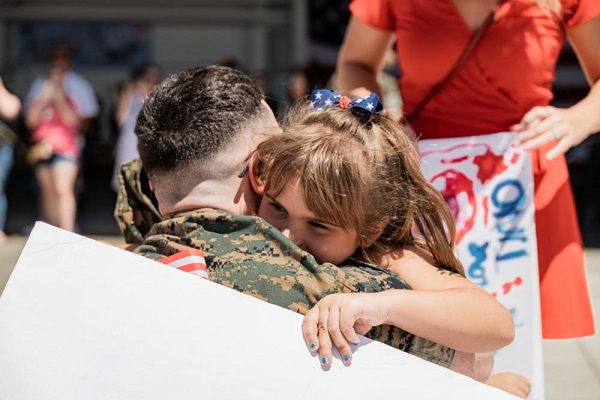 A U.S. Marine hugs his daughter upon returning to Marine Corps Air Station Miramar after a deployment aboard the USS Abraham Lincoln on August 11, 2022.

Welcome home, warriors! Thank you for protecting and preserving our freedom overseas.