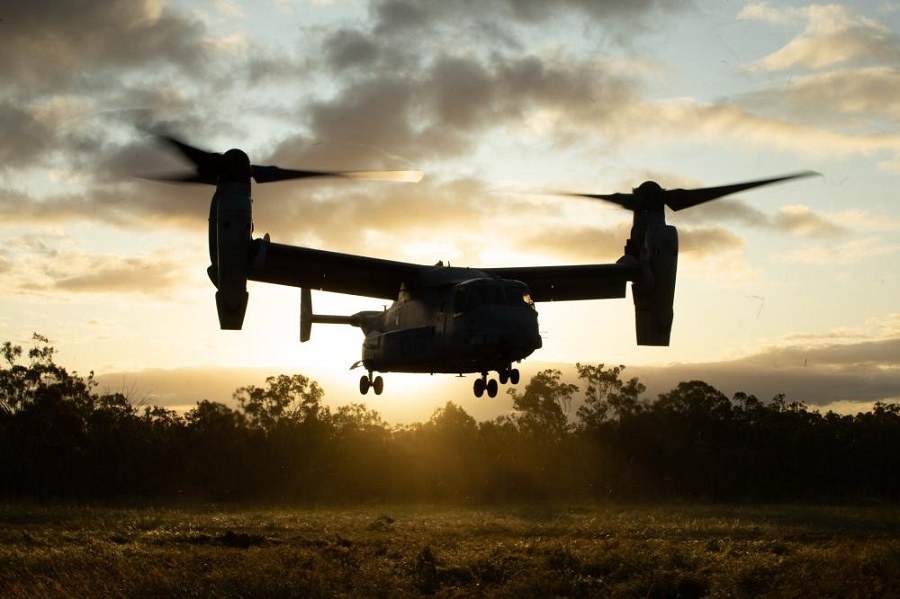 A U.S. Marine Corps MV-22 Osprey takes off during a long-range casualty evacuation exercise in Queensland, Australia, on May 24, 2022.

The military community is mourning a tragedy after an MV-22B Osprey carrying five U.S. Marines crashed on Wednesday in the southern California desert.

The U.S. Marine Corps confirmed on Thursday afternoon that all five Marines were killed in the terrible accident, which occurred approximately fifty miles north of the Mexican border.

“We mourn the loss of our Marines in this tragic mishap,” U.S. Marine Maj. Gen. Bradford J. Gering said in a statement. “Our hearts go out to their families and friends as they cope with this tragedy.”

“We mourn the loss of our Marines in this tragic mishap. Our hearts go out to their families and friends as they cope with this tragedy.” – Maj. Gen. Bradford J. Gering, @3rdmaw Commanding General https://t.co/RMuLkK5ez4

An earlier U.S. Marine Corps statement was quick to dispel rumors that began spreading Wednesday night on social media: “there was no nuclear material aboard the aircraft.”

Please keep the families of these five fallen Marines in your prayers as they are notified by the military about the loss of their loved ones. We ask God to comfort them during this dark hour and the difficult days ahead.

Back in April, The Stream reported on an apparent rocket attack that injured four U.S. troops on an American base commonly referred to as Green Village. While it was initially believed to be an enemy attack, the U.S. military is now investigating whether a rogue American service member was actually behind the assault.

“The attack was first described by the Pentagon as ‘indirect fire’  — a rocket or mortar attack of the kind occasionally launched at U.S. bases in Syria and Iraq,” CBS News reported this week. “But then, within days, the Pentagon said the blast, which resulted in traumatic brain injury for a small number of soldiers, was caused by an explosion that had been ‘placed’ inside the camp.”

Please keep praying for the 900 brave U.S. troops still stationed in war-torn Syria and the 2,500 serving in neighboring Iraq.

In the wake of America and the world observing the 78th anniversary of D-Day earlier this week, a top U.S. military general says the world is at risk of plunging into another devastating conflict.

”This is an extremely volatile time globally,” U.S. Army Maj. Gen. John Richardson told KXXV-TV in Texas. “Some of the action that Russia has taken, we haven’t seen that kind of aggression since World War II.”

With 100,000 U.S. military forces currently stationed around Europe to deter Russia in the wake of its invasion of Ukraine and news that extra troops deployed in February aren’t coming home anytime soon, the general said the American presence is both necessary and crucial.

”The mission right now is to reassure our allies by being there, training with them, and serving as a deterrent,” he told KXXV-TV.

Please pray for all 100,000 valiant American troops stationed in Europe and their families here at home.

A U.S. Air Force squadron is back in Florida after serving a six-month overseas deployment. 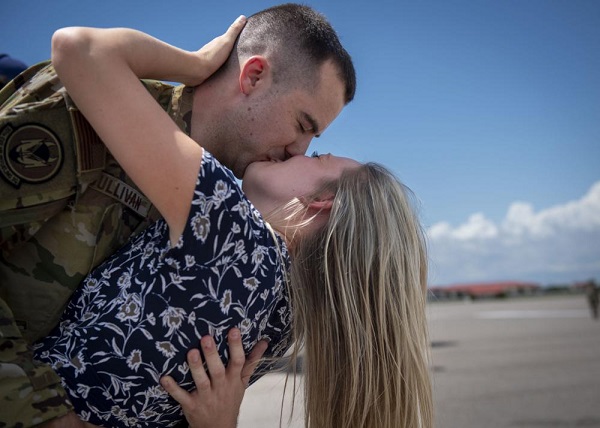 A U.S. Air Force pilot is welcomed home by his wife at MacDill Air Force Base in Florida on June 6, 2022.

Welcome home, heroes! Thank you for defending our freedom in faraway places.