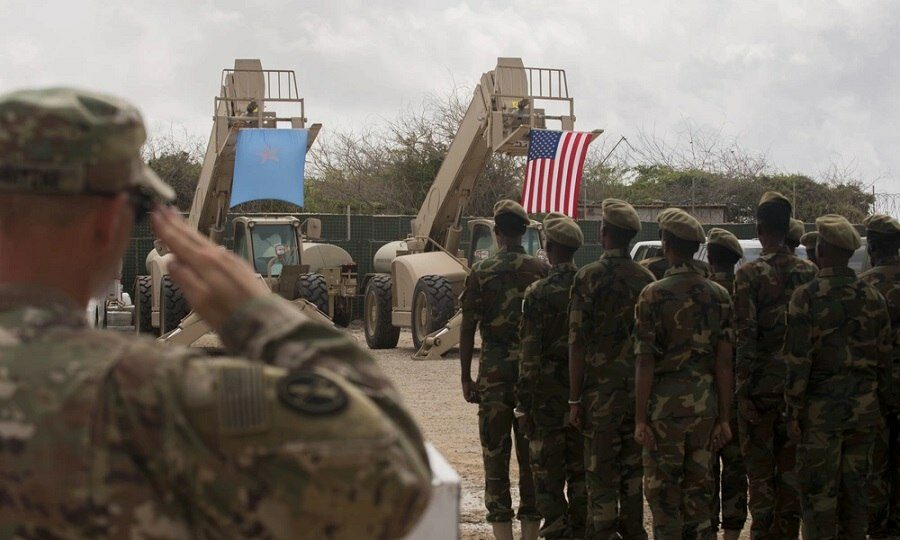 A U.S. Army soldier stands with Somali national army soldiers during a logistics course graduation ceremony in Mogadishu on August 17, 2018.

The U.S. military is resuming its mission in Somalia, which means hundreds of American troops will soon be back in the troubled Horn of Africa nation.

Task and Purpose reports that while U.S. forces will be helping Somalia’s military defeat the al-Shabab terrorist group, it will be in a stated “advise and assist” role. “But as the U.S. military’s previous experiences in Somalia and elsewhere on the African continent have shown, any mission can become a combat deployment,” Task and Purpose senior Pentagon reporter Jeff Schogol correctly notes.

The Department of Defense isn’t saying exactly how many U.S. service members are headed back to Somalia except that the number is “fewer than 500,” according to the report. Whatever the number, these selfless Americans will be entering a dangerous, unpredictable situation in a country where American blood has previously been shed. Please pray for these warriors for a successful mission and safe return to their loved ones.

The threat posed by ISIS in Afghanistan is increasing following last year’s full U.S. military withdrawal. Stars and Stripes reported this week on a deeply troubling new Pentagon report that says the terrorist group “likely will develop the ability to target the U.S. homeland within the next 12 to 18 months.”

While few specifics were offered about how ISIS in Afghanistan (also known as ISIS-K) would try to attack America, the report notes that U.S. military and intelligence officers are closely watching the country from Doha, Qatar, where drones can conduct “over the horizon” missions. It also notes that no American airstrikes have taken place in Afghanistan since last year’s troop withdrawal ended.

Take a look behind the scenes on a recent community engagement in NE Syria.

We remain committed to helping our @cmoc_sdf partners build communities free of Daesh influence to provide the people of NE Syria a path toward peace, stability, & hope. #StrongerTogether pic.twitter.com/0akOjKd15o

American military personnel are still on the ground in the Middle East to battle ISIS. The above images show U.S. troops during a recent community engagement patrol in Syria, which remains one of the world’s most violent countries. Brave U.S. service members are also serving in Iraq to help that country’s military deal with the ongoing terrorist threat.

Please say a prayer for the thousands of valiant Americans risking their lives to fight terrorism in Iraq, Syria and other dangerous places. They are doing God’s work by confronting a truly evil enemy.

About 10,500 American military personnel are headed to Europe to relieve fellow troops deployed immediately following Russia’s February invasion of Ukraine. As The Stream has been reporting, more than 100,000 U.S. forces are deployed around the continent to deter Vladimir Putin as the Russian president continues to threaten current and future NATO nations.

“Prior to the Ukraine war, about 80,000 U.S. troops were in Europe, either on permanent bases or rotating through to train with NATO allies,” the Army Times reported this week. “Some countries, like Lithuania, have sought a more concrete U.S. military presence to beef up security after Russia’s invasion of Ukraine.”

Training with our @NATO #Allies, it's what we do. It makes us #StrongerTogether!@USArmy #Soldiers assigned to 3rd Armored Brigade Combat Team, 4th Infantry Division, recently participated in a multinational training exercise in Pomorskie, Poland.#WeAreNATO pic.twitter.com/vH8Z8QJqNN

As seen in the images embedded above and Thursday’s Military Photo of the Day, the U.S. military is participating in massive training exercises across Europe, including Poland. We thank these American heroes for serving our country overseas during these dangerous times and pray for their swift and safe return.

A crew of U.S. Navy sailors is back home after serving six long months at sea aboard the USS Albany. 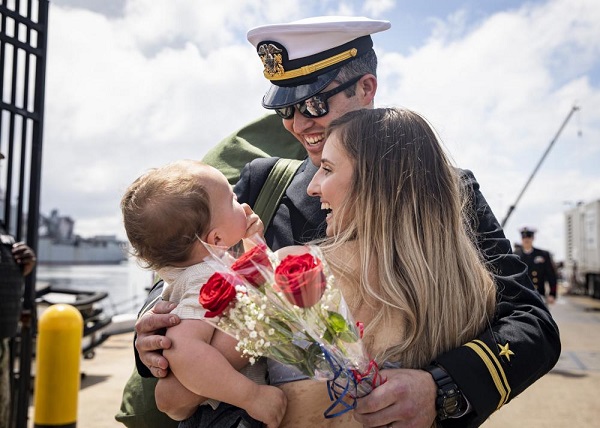 A U.S. Navy sailor serving aboard the fast-attack submarine USS Albany embraces his wife and son during the boat’s homecoming to Naval Station Norfolk in Virginia on May 14, 2022.

Welcome home, sailors! Thank you for defending our freedom and security. We hope you enjoy some well-deserved time with your families.