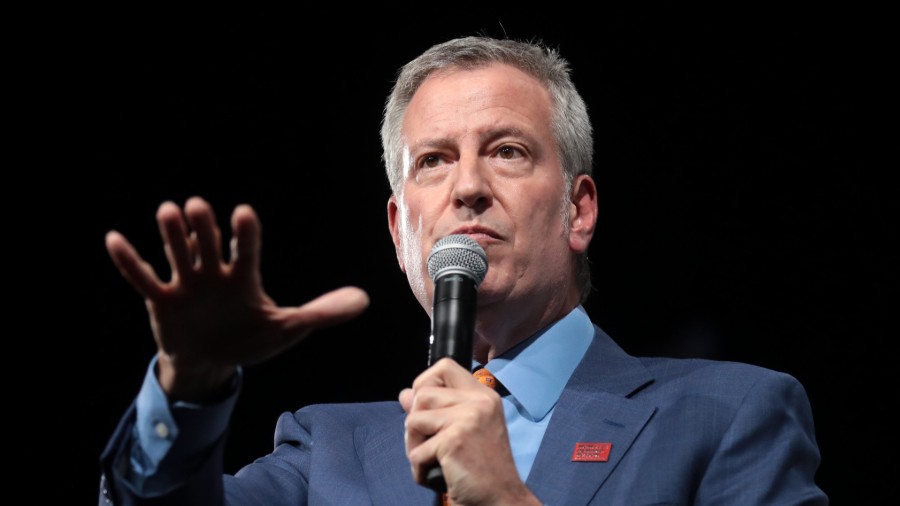 As a religious leader born and raised in New York, I’m appealing to you to reconsider your threats to the synagogues and churches of your city. Your words, sir, were reckless and could actually provoke people of faith to defy you. What on earth prompted you to say what you said?

What or Who Gives You the Authority to Permanently Close Down Synagogues and Churches?

I’m speaking specifically of your threat to “permanently” close synagogues and churches that refuse to comply with the ban on public gatherings.

Mr. Mayor, what gives you that authority?

Mr. Mayor, who gives you that authority?

I Have Urged Pastors and Leaders to Comply With Authorities

Please know that I have been using my platforms (radio, internet, and writing) to urge pastors and leaders to comply with bans on public gatherings.

I have urged fellow-believers to use wisdom and to love their neighbors, accepting these restrictions as something necessary for the public good.

And I have made clear to concerned pastors that these bans are not an attack on their religious freedoms, since the bans affect movie theaters and restaurants and strip clubs and bars as much as churches and synagogues and mosques.

You Specifically Threatened to Close Synagogues and Churches

Yet when you specifically threaten to permanently close synagogues and churches that do not comply, you immediately raise concerns. This certainly does look like religious discrimination.

You said, “I want to say to all those who are preparing for the potential of religious services this weekend: If you go to your synagogue, if you go to your church, and attempt to hold services after having been told so often not to, our enforcement agents will have no choice but to shut down those services,” making clear that you did not “say this with joy.”

You seriously overstepped your bounds when you also said this: “If that does not happen, they will take additional action up to the point of fines and potentially closing the building permanently.”

And you added, “I understand how important people’s faiths are to them, and we need our faith in this time of crisis. But we do not need gatherings that will endanger people.”

Again, sir, I support you in saying this and I’m sending this same message out to the millions of people I seek to reach each week.

I can even understand this part of the stern warning you gave this week: “The NYPD, Fire Department, Buildings Department, and everyone has been instructed that if they see worship services going on, they will go to the officials of that congregation, they’ll inform them they need to stop the services and disperse.”

But you seriously overstepped your bounds when you also said this: “If that does not happen, they will take additional action up to the point of fines and potentially closing the building permanently. You’ve been warned, you need to stop services, help people practice their faith in different ways, but not in groups, not in gatherings that could endanger people.”

What? You said that an option on the table was “potentially closing the building permanently”? Shutting down a synagogue or church forever because of a violation of the current guidelines? I could see arrests and fines. But this?

With all respect, sir, and meaning no insult, this sounded to me like a frustrated parent, upping his threat to his kids when they do not obey. In this case, not only does the punishment not fit the crime but the punishment, to my knowledge, is both illegal and unconstitutional. Please correct me if I’m wrong.

Again, I’m with you on enforcing the ban for public safety. Right now, better to be safe than sorry. And I can’t imagine the pressure you’re now under, facing criticism for your earlier handling of the pandemic and with New York City the hotspot of the entire nation. Millions of lives are at stake, and under such circumstances, it’s possible that you misspoke.

I interacted with an ultra-Orthodox rabbi in Brooklyn today. He told me that people in his community have already died of the virus.

Please also understand that from our perspective, as lovers of God and lovers of life, your harsh threats are all the more hypocritical and glaring when we realize that you have allowed abortion facilities to remain open during the crisis.

So, do what you have to do, within the bounds of law, to protect your citizens.

You Can Make This Right

But do not needlessly provoke religious leaders and believers who, as you noted in your press conference, have done a great job of complying. (And may I ask why you did not threaten mosques with closure? Is this because none of them violated the bans? Or was there another reason?)

Please also understand that from our perspective, as lovers of God and lovers of life, your harsh threats are all the more hypocritical and glaring when we realize that you have allowed abortion facilities to remain open during the crisis. The elective slaughtering of babies in the womb is considered an essential service, but Jewish and Christian believers who would dare gather together to pray are threatened with permanent closure of their buildings.

Something is terribly wrong with this picture, sir, and you are the only one who can make it right. Please do.

(For my video comments, see here.)