Kyle Rittenhouse was rightly vindicated by a jury of his peers. 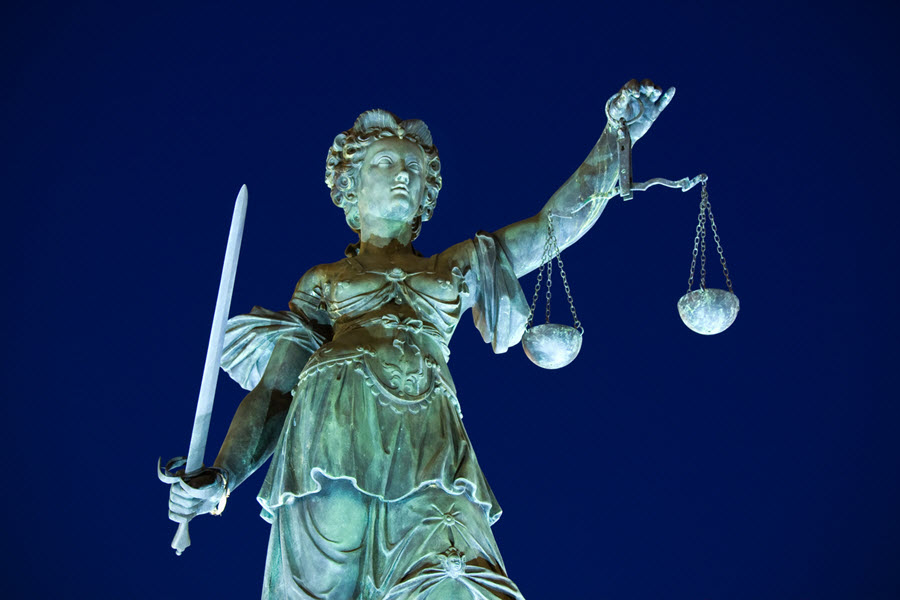 I’m not a lawyer, but my vision is good — at least with corrected lenses — and based on the videos, the Kyle Rittenhouse case looked like an “open and shut case.” He clearly acted in self-defense.

My first question is why was he even on trial? It seems to me that Fox Nation should have honored him at their Patriot Awards event Wednesday night. This 17-year old kid put himself in harm’s way to minimize the damage to his father’s home town, because they were short on law enforcement officers. And why were they short on law enforcement officers? Because Wisconsin’s Democratic Governor, Tony Evers, had refused offers for additional law enforcement help, according to then White House Chief of Staff Mark Meadows.

Reporters pretended that he “crossed state lines with his gun to kill people.” Actually, his drive to the neighboring community where his dad lives was a shorter distance than from the north end of DFW airport to the south end. Nor did he bring any weapons. When he first arrived in Kenosha, he began to put out fires and clean up graffiti. He had been trained as a medic and a lifeguard, so he was there to assist in any way he could.

From my understanding, privy only to public information, my theory is that Rittenhouse could have a “calling” to become a law enforcement officer one day. His Facebook page was filled with pro-law enforcement tributes. He also went through a local police cadet program near his Antioch, IL home. That’s not typical for a kid his age. Perhaps he “jumped the gun” (pardon the pun) a little bit on trying to fulfill that calling.

Another fellow, named Moses, kind of did the same thing when he killed the Egyptian who was beating one of his Hebrew brethren. (Exodus 2:11-12) God had called him to deliver his Hebrew brethren, but he stepped out on that calling a little pre-maturely. Perhaps Rittenhouse did that (or not). But self-defense is self-defense, regardless of whether it was the perfect time and place for him to have been that night.

My second question is when can we expect to see the trials of all those thugs who burned down the city, causing more than $50 million in damage?

I rejoice that the verdict of the jury was a just one. It took a lot of courage on the part of each of the twelve jurors, despite the threats of “mob-rule” advocates. A crowd of protesters lurked outside the Kenosha County courthouse throughout the trial and intensified during the jury’s deliberations. At least two were arrested for disorderly conduct. Some wore T-shirts that flagrantly read, “F_ _ _ KYLE.”

One woman, who was a Rittenhouse supporter had her sign that said “Self-defense is not a crime” grabbed from her and torn in half. Protestors chanted within earshot of the jurors, “No justice, no peace!” In other words, if you don’t want a repeat of August 2020, you better deliver a guilty verdict.

As reported by Al Perrotta in today’s Morning Brew, an MSNBC reporter was busted trying to follow a bus transporting the jury members, no doubt to photograph them.

And of course, the “Twitterverse” chimed in with shameless tweets like this: 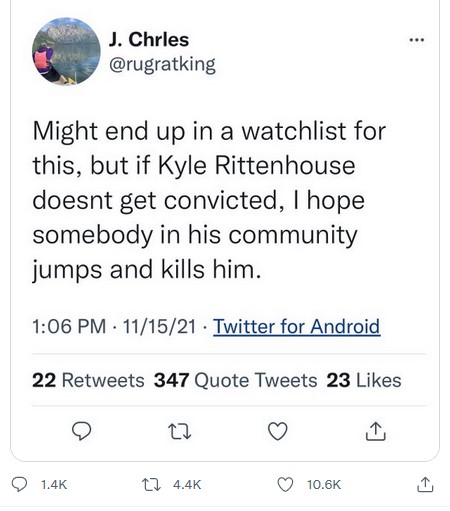 Morning Joe on MSNBC said of Rittenhouse: “He appointed himself a militia member, he goes around, and he ends up unloading  … what … 60 rounds?”

Rittenhouse was also called on that same station a “Trigger-happy vigilante” and “Radicalized by Trump.”

Moreover and predictably, he was called a “white supremacist,” a life-wrecking charge based on zero evidence. All three of his attackers whom he was forced to shoot were white.

Riddle: What does Kenosha Have in Common With Gregory Peck and Polybius?

Kyle faced a real, live “lynch mob,” akin to the Old Sarum Bunch in To Kill a Mockingbird, which showed up at the jail to lynch Tom Robinson, who’d been falsely accused.

But this mob mentality goes back a lot further than Harper Lee, or even Jim Crow. Polybius, a Greek historian of the Hellenistic period, was known for his analysis of the separation of powers. He wrote of angry crowds:

Fired with evil passions, they are no longer willing to submit to control, but demand that everything be subject to their authority. The invariable result is that government assumes the noble names of free and popular, but becomes in fact the most execrable thing, mob rule.

It seems things haven’t changed much in the last couple of millennia. He might as well have been referring to Kenosha, WI in 2021.

And this moment with Rittenhouse reminds me of 1957 … Little Rock, Arkansas … nine students. Dwight Eisenhower went on national TV and showed some real leadership. [He] sent a thousand national guardsmen, the 101st Airborne to protect those kids.

He was referring to nine African-American students, who were the first to integrate Central High School in Little Rock. The mob showed up, shouting obscenities and even throwing objects, to keep them out. The state’s governor supported the mob. Because of Eisenhower’s leadership, quickly sending in a thousand troops, the mob was quashed, and the students were able to attend. And if he was in the White House today, I’m certain Eisenhower would do the same for Kenosha. He once said, “Mob rule cannot be allowed to override the decisions of our courts.” But then, there were never any “Let’s Go Eisenhower” chants either. So, I’m not going to hold my breath waiting for Biden.

This needs to happen for these jury members. They need to know, from the president on down, America has their backs, and they can make whatever decision they want; they will be protected. We will not let this mob overrun them and ruin their lives … .  The mob forced this trial. And now, the mob has taken the jury hostage, I believe mentally. There’s so much fear in Kenosha that we’re going to have the rioting and looting, violence, and the arson, that we just saw a year ago that it’s going to repeat itself.

Let’s thank the Lord that it didn’t turn out that way.

Micah 6:8: “The Lord God has told us what is right and what he demands: ‘See that justice is done, let mercy be your first concern, and humbly obey your God.’”