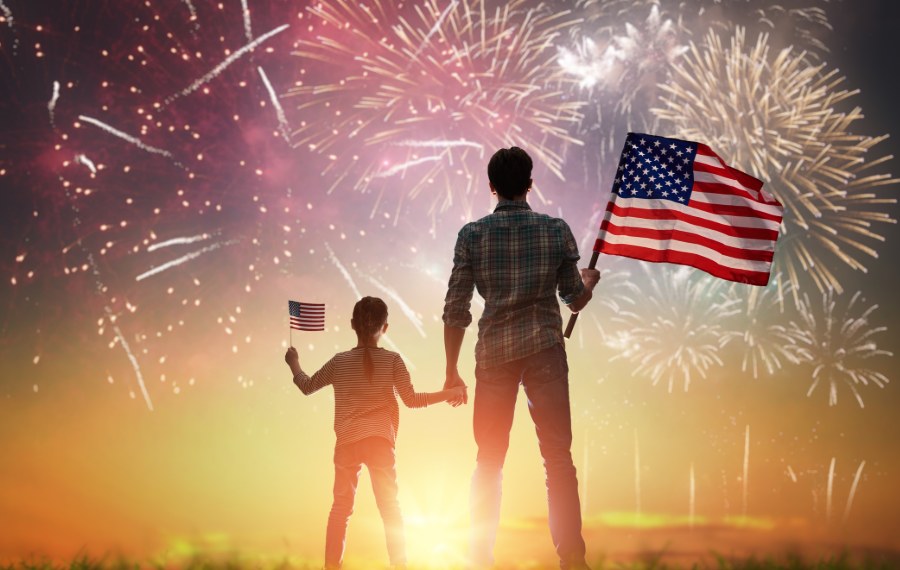 In today’s upside world, you display your patriotism by hating America. You show your loyalty to your country by being ashamed of your country. Well, I’m going to opt out of that exercise, since I’m not ashamed to be an American. There are many wonderful things about the USA.

Sure, We’re Not Perfect

To be sure, since I first started preaching in 1973 at the age of 18, I’ve been decrying the sins of our nation. I’ve even written books that begin with words like, “America needs to repent!”

I am hardly blind to our many national failings, and in certain ways, we lead the world in sin.

A Business Insider article from 2011 listed, “20 Shameful Categories In Which America Leads The World.” Not much has changed since then.

But There Is Much That Is Right

But there is also much that is right. And good. And noble. And praiseworthy.

We should be very thankful for all that.

As I tweeted on June 23, “If America is such a terrible country, why have we received more immigrants than any other country on the globe for years? And why do so many people from around the world come to study at our universities? And why do so many want to move here if we are so bad?”

It’s one thing to point to an idyllic little city-state like Monaco on the French Riviera with less than 40,000 residents. Perhaps a place like that does not have as many problems as we have here in the States.

But let’s compare apples with apples.

Looking at the three most powerful countries on the planet, America, Russia, and China, how many of us are relocating to the Russia or China? Or going there to attend university?

How many of us think of either of those countries as the land of the free or the home of the brave? And as much as we might deplore the spirit associated with some of the current protests here in America, could you even imagine protests like these in Russia or China? Not on your life. Literally.

Our Great Freedoms and Opportunities

We continue to enjoy unique freedoms here, freedoms still unknown throughout much of the world today, especially the Muslim world. July 4th remains a great day to celebrate those freedoms.

And is there a country on the planet with more opportunities than we have here? Any country even close? As I’ve spoken to many a first-generation immigrant over the years, it’s the word I hear from them over and again: opportunities. That’s what brought them here.

We are terribly far from being a perfect union. But we have been richly blessed.

America is also the place of dreams, of doing the impossible, of the sky being the limit. It’s the country of “can do,” of doing it bigger and better. It’s only when you travel the world and speak to people from other cultures that you realize how deeply this attitude is instilled in us.

We’re also a very generous nation. Many a foreign missionary has told me how much of their support comes from the USA, while we are always on the front lines worldwide with disaster relief.

And we’re a nation that has played a key role in the world’s balance of power. Take America out, and the state of the world begins to look very different very quickly.

History professor Timothy Furnish recently wrote an article on The Stream positing what might happen if America broke up into two countries, which he called Trumplandia and Antifistan. The results included:

Even when it comes to the issues of slavery, segregation, and racism, things continue to improve. Virtually none of us could imagine tolerating a society today with outright segregation, let alone one with the horrors of slavery and the slave trade. That is not who we are today.

We Did Away With Slavery

And even when it comes to the ugly sin of slavery, we must remember that this was part of the culture of most of the world in centuries past.

As noted by Thomas Sowell, “Of all the tragic facts about the history of slavery, the most astonishing to an American today is that, although slavery was a worldwide institution for thousands of years, nowhere in the world was slavery a controversial issue prior to the 18th century. People of every race and color were enslaved — and enslaved others. White people were still being bought and sold as slaves in the Ottoman Empire, decades after American blacks were freed.”

Here in America, beginning with the colonies, there was always resistance to slavery. There was national division over slavery. And our bloodiest war was fought over slavery.

President Lincoln, in his second inauguration speech, actually stated his belief that the loss of lives in the Civil War (620,000 Americans) was a divine judgment because of slavery. He said, “(T)he blood drawn with the lash shall be paid by another drawn with the sword.”

There’s no doubt that we still have a good ways to go to level the playing field for Black Americans. But we have made real progress. (See here, for an assessment in 1998, and here and here for more recent assessments.)

Just consider the massive strides forward in terms of employment opportunities, educational opportunities, and opportunities in the media and politics and science and sports and every other field since the days of segregation.

Building Toward a More Perfect Union

Again, we certainly have a ways to go, but we can build on the progress made. And we can take pride in the fact that we elected a Black man to the White House, even if many of us could not vote for him because of his political views. He was still our president.

And at this very moment, I truly believe that a Black, conservative Republican candidate running for president would gain the votes of the vast majority of White conservatives. Ideology, not color, would be the deciding issue.

Certainly, I’m all for national repentance gatherings, for public confession of sin, for humbling ourselves before God, and for pleading for mercy on our land. And I’m all for the Church leading the way.

But I also appreciate the price that was paid for our freedom and I acknowledge the great things God has done in and through America.

We are terribly far from being a perfect union. But we have been richly blessed.

Let’s celebrate those blessings on the 4th of July.