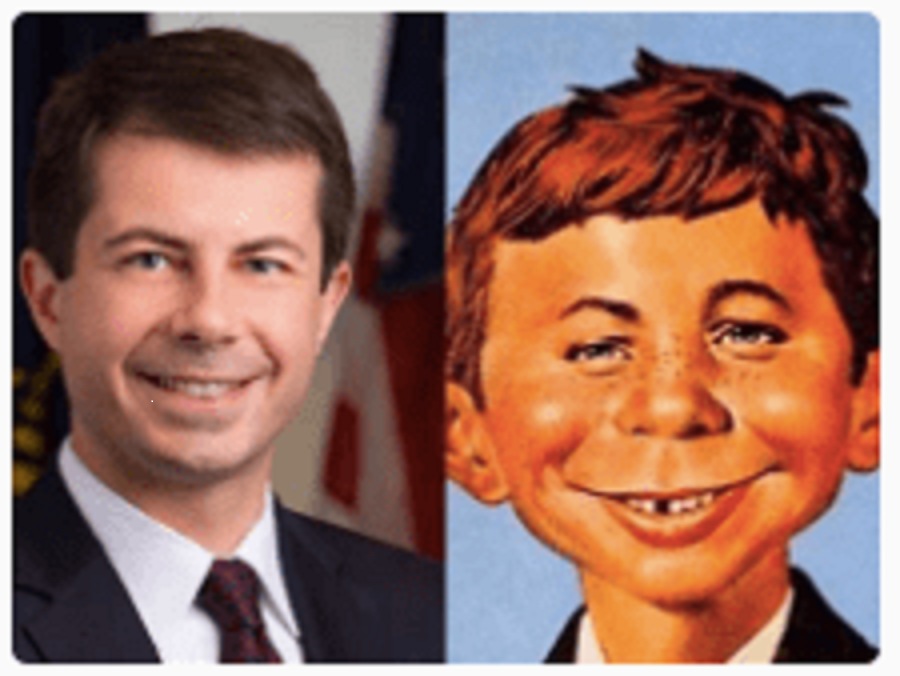 A series on the Catholic vote in the 2020 election. See Part One here.

I mentioned to Stream managing editor Al Perrotta that there’s a new article in the left-wing, barely and grudgingly pro-life National Catholic Reporter, “A Catholic Case for Pete Buttigieg.” At first he laughed. He thought I was making it up. Then he saw the look on my face. It said, in essence, “Be glad that you’re not the guy who has to muck out that latrine, pal!”

Yes, of course that article’s no hoax. Those eager to flip Catholic swing voters — and hence Midwestern swing states, and the election — are frantically sharing it. They’re desperate to convince people to support a rabid supporter of abortion right up through birth. Someone who abandoned the Catholic church so he could “marry” another man in an Episcopal ritual. A young man raised by one of the leading Communist scholars and activists on earth — who kept up that activism while a professor at the hulking, post-Christian Notre Dame.

A failed Midwestern mayor, who ran interference for filthy, scofflaw abortion clinics like Ulrich Klopfer’s. Remember him? He’s the South Bend abortionist who covered up the rapes of 14-year-old girls, and hoarded 2,246 abortion victims in jars all around his house. (Was he planning to sell them on Etsy?) When that news came out, all Mayor Pete could say was that he hoped it wouldn’t be “politicized.” He’d better hope that.

Hill notes that these baby remains were of “varying sizes and varying estimates” and that some were from late term abortions.

The Reign of God on Earth

Let’s see what kinds of persuasion post-Catholics use to boost Buttigieg. This author, Robert Bordone, effervesces about

Buttigieg’s character, his heart, his decency and his values.

I’m supporting him for the presidency because I believe his vision for the nation has the best chance of moving us in the direction of a more just and peaceful society, one that advances the reign of God on Earth.

So, crime-ridden cities with abortion clinics that flout even our lax laws, whose owners hoard pickled fetuses in jars? Or maybe the author means something else by “reign of God.” He leans on the claims of our taxpayer-subsidized Democrats in pointy hats (i.e, the U.S. Conference of Catholic Bishops). Berdone has

considered the guidance to Catholic voters from the U.S. bishops’ conference, the 42-page “Forming Consciences for Faithful Citizenship,” [and] concluded that Buttigieg’s stance on issues aligns more closely with those favored by the Church than that of any other candidate.

Last time I warned that the bishops diluted the black and white evil of abortion and infanticide with dozens of other fake “life issues.” Any policy that affects human life in any fashion they claim as a life issue, from tax rates to immigration policies. A nifty trick, if your task is to run interference for Pete Buttigieg, or Ulrich Klopfer.

Next Berdone waves a silk scarf around with his right hand, so you won’t see what his left is doing.

Gosh, such a hard comparison. Berdone is a Senior Fellow at Harvard Law School. So you might think he had the grey matter to work out this one. But let’s help him out here. Are a million immigrants dying at U.S. borders every year, gunned down by vigilantes or misguided target shooters, because our laws grant them no legal protection? If that were true, and Donald Trump were for it, Berdone might have a point.

The whole article blathers on in this content-free, emotive hand-waving fashion. Berdone doesn’t make one more argument. Not really. He just … effuses, like some middle-aged nun in leotards thumping around in a liturgical dance to New Age versions of Amazonian peace chants.

Frankly, this column reminded me of Tom Cruise effusing about the “prophetic genius” of L. Ron Hubbard.

This Harvard prof makes an effort to situate his buzzwords, slogans, and Pavlovian signals in what appears as grammatical speech. But really they’re best presented in a litany chanted by children, perhaps sung to some simple tune, like “I Love You, You Love Me.” Berdone makes a little bouquet out of gathered flowers like these:

Or how about these:

[H]onoring the dignity and inherent worth of fellow citizens, striving for truth, taking responsibility for ourselves and our decisions, being bold in word, deed and action, radiating joy.

Not convinced yet? What about this:

Buttigieg has comported himself with compassion, kindness and integrity, all of which reflect glowingly on the Catholic education he received.

Resist the Temptation to “Otherize”

Is that not enough red meat for you? What’s wrong with you people? Okay then. Squeaky Pete

has built a movement whose bedrock is belonging. In my interactions with the campaign as the volunteer Catholic engagement coordinator, I’ve seen colleagues who reach out to persons of every race, creed, gender, age, sexual orientation, gender identity and ability level with acceptance and belonging. …

Not sold? But Pete

resists the temptation to “otherize” his opponents.

each human being possesses inherently good and inherently bad components, urging political leaders and average citizens to find ways to nurture the good and to root out the bad.

What more could we ask for from a man we’re choosing to lead the most powerful, consequential nation on earth?

Seriously, folks. This kind of cult-member blather passes for political thinking and argument among post-Catholics, bishops included. Let’s help President Trump take down that sea monster with a harpoon.