Pete ‘Angel of Light’ Buttigieg Has His Very Own Kermit Gosnell 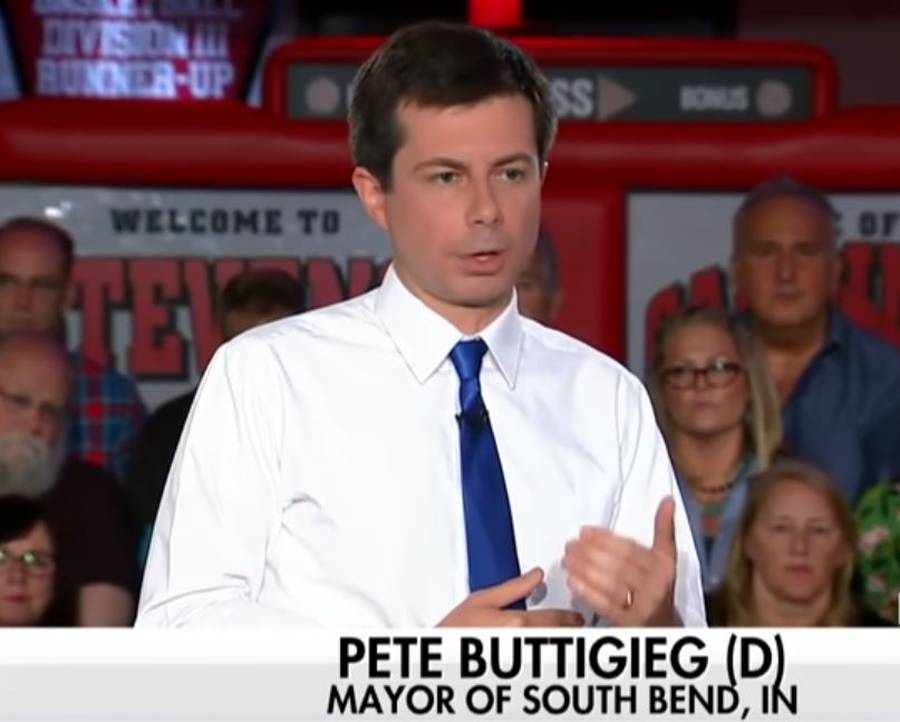 The corruption of the best yields the worst. The most obvious example is Satan, once Lucifer, once first among the angels. A mighty person or institution, if turned to evil, does vastly more harm. A rampant, stampeding elephant outweighs an angry ferret.

But what if all the rage and destruction of a maddened pachyderm could be squeezed down into that ferret? Could creep among us unseen, unnoticed? Perhaps even gull us into adopting it as a pet? Then as we grew fond of it, it slowly grew in size. It imperceptibly gained power. Until at last the monster we’d fed and fostered turned on us.

What if liberal Christianity is that dark power, and Pete Buttigieg is that ferret?

Let’s do some detective work and find out, shall we?

Christianity: The Truck Worth Hijacking

There’s enormous residual power, at least in the U.S., still attached to Christian sentiments and rhetoric. The last great thing accomplished in America by the Gospel was the Civil Rights movement. (Which was misnamed by the way. It should have been called the Christian Equality movement.) Even liberals who hate the church still venerate that, though they begrudge Christ any credit.

However crass, base and greedy our culture becomes, the story we like to tell of ourselves is a Christian fable. We are “lifting up” the poor and defenseless. We’re “protecting the vulnerable” and “binding up wounds.” We’re rejecting harsh moralism and embracing the Prodigal Son. Those are the masks people feel compelled to wear. No matter that they’re advancing astonishing evils, from infanticide to human trafficking across our southern border, from the grooming of children by drag queens to the mass importation of jihadists.

Here at The Stream, Samuel Gregg told the story of the pivotal Marxist strategist Antonio Gramsci. (We know him best as the father of Cultural Marxism.) Gramsci noticed that his beloved proletariat didn’t even want the Revolution. So he determined instead to show elite, atheist, materialist, totalitarian activists how to impose one anyway. Not by storming factories, but by infecting people’s minds. By hollowing out the institutions of Christian civilization. Then manning all their high points with believers in “new” and “updated,” “socially conscious” versions of old doctrines. That is, with Marxist counterfeits.

What made this easier? Marxism itself is an ersatz gospel. It’s not “scientific” or even philosophical. It’s an end-times Utopian fantasy exactly like those that drove Jew-baiting mobs in the late Middle Ages, eager to bring on the Millennium by force. (For more, read Norman Cohn’s The Pursuit of the Millennium.)

What if you wanted to replace Christian faith, right here in America? Let’s say with a worldly, materialistic creed that promised a Utopia built by man using the bayonets of the State. What tack would you take? You’d listen to Gramsci. You’d reject wild-eyed, gesticulating beards like V.I. Lenin. You’d look for mild-mannered, outwardly pious Christians like … Pete Buttigieg.

Oh, did I forget to mention that Pete Buttigieg’s father failed as a Jesuit seminarian, and instead went on to become one of the world’s leading authorities on Antonio Gramsci? The (cough) Catholic University of Notre Dame paid Buttigieg for decades to teach Gramsci’s ideas to its students. Those details might be relevant. You know, to deciding whether we think son Pete a sincere, if slightly misguided liberal Christian who simply loved the wrong person (a man). Or whether the mayor is a very different breed of ferret.

O Lord, I Thank You That I Am Not Like Mike Pence

I’m speaking of Buttigieg’s Christian identity since he does. Incessantly. He walks through the public square blowing a horn about how very Christian he is. As I wrote here before, Buttigieg cooperates with media efforts to demonize men like Vice President Mike Pence, to cast biblical believers as hateful “extremists” outside the “mainstream.” Exactly as Gramsci recommended, by absolute, sheer coincidence.

However crass, base, and greedy our culture becomes, the story we like to tell of ourselves is a Christian fable. We are “lifting up” the poor and defenseless. We’re “protecting the vulnerable” and “binding up wounds.” We’re rejecting harsh moralism and embracing the Prodigal Son. Those are the masks people feel compelled to wear.

Is there some piece of evidence that would help us? Would let us discern Buttigieg’s sincerity? Maybe tell us whether he serves as an active, conscious agent trying to hollow out Christianity and replace it with something else?

How about this? Please follow the facts here with me. The Washington Examiner reports:

The preserved remains of more than 2,200 unborn children were found in the home of Dr. Ulrich Klopfer following his death on Sept. 3.

Family searching through the late doctor’s possessions discovered the remains in Klopfer’s Will County, Illinois, home and contacted authorities.

Law enforcement confirmed that they discovered 2,246 medically preserved bodies of aborted babies but did not find evidence that any abortions had taken place at Klopfer’s residence.

Klopfer practiced as an abortion doctor at the Women’s Pavilion in South Bend, Indiana, but was forced to stop when his medical license was suspended in 2015 after he failed to report that he had performed an abortion on a preteen girl.

South Bend. Isn’t that the city where Pete Buttigieg is mayor? Was there any connection between this ghoulish, dead abortionist and that very Christian mayor? Turns out, there was! A little more than a month ago, the Washington Free Beacon noted it.

Pete Buttigieg renewed support Tuesday for a South Bend abortion provider with a history of health and safety violations, citing his deep concern over “a new and extreme assault on Roe v. Wade.”

Whole Woman’s Health, a chain of abortion clinics with seven locations in five states, committed dozens of health and safety violations in three Texas facilities between 2011 and 2017, including the lack of a registered nurse on staff, inadequate sterilization of equipment, and missing fentanyl stock.

The Indiana State Department of Health denied Whole Woman’s Health of South Bend’s license application due to a lack of “reputable and responsible character” and failure to disclose “information related to additional clinics,” including the Texas clinics. The facility has been able to perform abortions unlicensed since it obtained a preliminary injunction from a federal judge.

A spokesman for Buttigieg’s presidential campaign touted his support for Whole Woman’s Health by citing the lack of abortion options in South Bend.

“The South Bend clinic would be the only one for a radius of several counties,” Buttigieg’s national press secretary Chris Meagher told the Chicago Tribune. “It is a restriction on a woman’s right if she is low-income, or doesn’t have a vehicle, and she has to visit multiple times, but the clinic is dozens of miles away.”

South Bend was previously home to an abortion clinic opened in 1978, The Women’s Pavilion. The clinic was shut down in 2016 after its owner, Dr. Ulrich Klopfer, was stripped of his medical license indefinitely. Klopfer was found to have violated state law nine times, including not reporting “an abortion on two girls under the age of 14” within the required timeline.

In April 2018, Buttigieg vetoed a South Bend Common Council rezoning decision that would have allowed a pro-life pregnancy center, Women’s Care Center, to open next door to Whole Woman’s Health. Buttigieg told the South Bend Tribune he did not find it “responsible” to situate the two organizations “literally right next to each other” despite Women’s Care Center’s promise not to allow protestors to stage demonstrations on their property.

Huh. It seems the “mainstream,” “compassionate” Christianity that Buttigieg wants to impose has curious doctrines. It sticks up for corrupt, unsafe abortion clinics. The same kind that employ fetus-collecting ghouls like Doctor Klopfer, then get forced to close. It bans pro-life pregnancy centers that offer women options to save their babies.

If we had honest media in this country, they’d hang South Bend’s Kermit Gosnell around Pete Buttigieg’s stiff neck. Like a necklace of 2,246 tiny skulls.