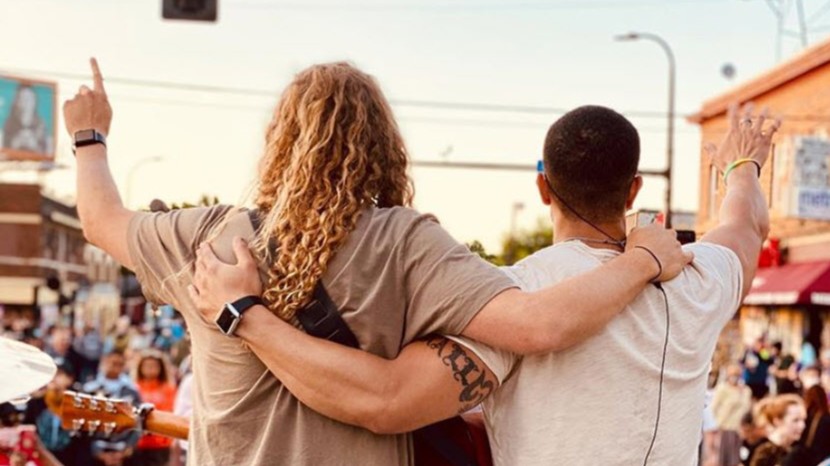 Sean Feucht posted this photo on Instagram saying, "What They Don’t Want You To See!!!! The rage against the John 17 UNITY prayer of Jesus is real right now in Big Tech." A video he had posted of the same worship event at the George Floyd Memorial Site in Minneapolis was removed by Instagram for allegedly going against community guidelines.

The headline to this article is not sensationalistic. It is not click bait. It is truth. Shocking truth. Yes, Instagram has designated videos of live worship on the streets to be in violation of community guidelines, calling the content “harmful.” Let the outrage be felt and heard.

Sean Feucht is a worship leader and songwriter who recently ran for political office in California. He is also a conservative Christian.

On June 23 he tweeted, “This is what we’ve come to in America! Instagram is now classifying my WORSHIP videos as ‘harmful or false information.’ Religious Liberty? Freedom of Speech? Big Tech censorship?”

This is what we’ve come to in America!

Included in the tweet was a screenshot from Instagram, explaining that the company had removed his video post because it was violation of Community Standards. (Oh, those dread community standards again!)

What on earth does this mean? What can it possibly mean?

Feucht’s tweet got the attention of Missouri’s Senator Josh Hawley who tweeted, “Cancel culture meets #BigTech. Now @instagram is censoring a Christian worship leader who wants to post videos of praise and worship from places where there has recently been unrest. And that doesn’t meet ‘community standards’? Can’t wait to hear the explanation for this.”

Cancel culture meets #BigTech. Now @instagram is censoring a Christian worship leader who wants to post videos of praise and worship from places where there has recently been unrest. And that doesn’t meet “community standards”? Can’t wait to hear the explanation for this https://t.co/QoQcpEo2q8

As of this writing (late Thursday night, Eastern Time, June 25), we are still awaiting explanation.

A few years ago, I repeatedly challenged Facebook for censoring some of my posts for alleged violation of community standards, exposing the rank hypocrisy of their decisions.

For example, my factual, fairly-worded post dealing with LGBT issues would be deemed hateful, while the most blasphemous, unimaginably profane, anti-Christian Facebook pages were allowed to operate without restriction. Seriously?

Thankfully, in most cases, with the help of an internal contact, Facebook reinstated my posts (or, restored my status). But other colleagues of mine did not fare so well, having their pages permanently shut down for alleged violation of the dreaded (and oh so ambiguous) community standards.

It seems that “hate” meant one thing for one group and something entirely different for the other. (For a recent, video exposé, see here.)

When it comes to YouTube and Google, the battle continues, with large channels like Prager U still experiencing discrimination and unequal treatment. (Where are all the social justice warriors calling for equality? Somehow, they don’t seem to be raising their voices for Prager U.)

In my own experience, after having over 1,000 of my channel’s videos branded unsuitable for advertising in a single stroke (!), YouTube has actually been fair with me, even surprising me at times by what it approves for monetization. At the same time, we know that the other shoe could drop at any moment and suddenly, we could be banned.

It is a big mistake to put our trust in Big Tech.

What Were the Censors Thinking?

What happened with Instagram, though, seems even more bizarre and extreme. What on earth were the all-powerful censors thinking?

There are endless videos on Instagram showing disturbing clips from the recent protests and riots, all of them somehow in conformity with community standards. (Right now, over on Twitter, I’m watching a video of the “CHOP” call from Seattle, with specific reference to guillotines. I imagine similar videos can be found on Instagram.)

But when a video is posted showing Christian worship in the midst of these protests, it is removed for alleged “harmful or false information.”

Since there is nothing “false” about the video, then it must be considered “harmful” — hence the headline to this article.

Is this actually what Instagram meant? Could they possibly be claiming that worshiping the Lord on the streets of our divided cities is harmful?

If so, I would encourage every worship leader and every worship team to hit the streets of their own communities, posting similar videos and sharing them as widely as possible, starting on Instagram. (Hey, it’s a great thing to do anyway and just what America needs.)

If Instagram has made a mistake, I hope they own up to it and say, “We totally blew it! There is no excuse.” Otherwise, this means war — as in spiritual war.

But lots of prayer. Lots of worship. Lots of preaching. And lots of standing up and being heard. If not now, then when?

Time to Flood Big Tech With Worship and the Word

Ironically, as if to drill the point home, as I was writing this article, I spotted another tweet from Sen. Hawley from a few hours ago. He wrote, “Now @Twitter is actively censoring Bible verses? Seriously? Why?”

Feucht included a screenshot of tweets from Beni Johnson, then using the handle @prayfor5, which at present is not appearing on Twitter. Her tweets, posting Bible verses, were blocked, with the note, “This Tweet may include sensitive content.”

So, worship is deemed “harmful” and Scripture verses about peace are deemed “sensitive content.” Really?

Let us, then, flood Big Tech with the Word and worship. And let us report and challenge every unjust infraction about the practicing of our faith.

(For my 10-point, winning strategy for believers leading into this volatile election, see my new book Evangelicals at the Crossroads: Will We Pass the Trump Test?)