The first in a series on unsung #PoliticalHeroes. 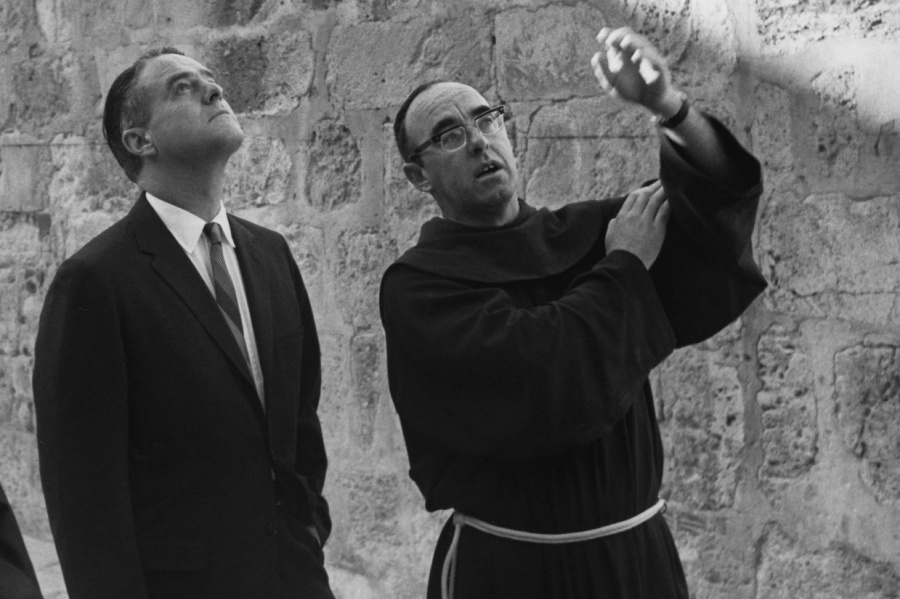 Sargent Shriver at the Church of the Holy Sepulcher in Jerusalem in 1964.

It’s sad how little of his father’s faith his son Mark understands. A Democrat whom even Republicans liked, Sargent Shriver was a serious Christian, and a pro-lifer back when that was possible for a leader in his party.

A devout Catholic, not a cultural one, he worshipped every day. He was a man of prayer. His politics grew from his faith. And that faith led him, frightened, into a leper ward.

For Civil Rights, Against Abortion

Shriver had been an “America Firster” before World War II, wanting America to stay out of foreign wars, but at 26 volunteered for the Navy before the Japanese attacked Pearl Harbor. He served five years in the Pacific and earned a purple heart.  He married into the Kennedy family, having known John F. Kennedy since their freshman year of high school, but he wasn’t a Kennedy as many think of the family now.

He worked for civil rights long before most of his peers showed any interest. The political establishment, Democrat and Republican, thought of civil rights for black Americans as something to deal with later.

He opposed abortion when most of his party had accepted it. He described pro-life work (speaking of Birthright in particular) as an “answer to violence and death.” It is a fight “for the weakest of all human beings: the speechless fetus living inside the mother’s womb.” Running for president in 1976, when his position hurt him politically, he said, “I am strongly opposed to abortion.” He promised to work “for the day when abortion will no longer be looked upon by anyone as a desirable or necessary procedure.” He and his wife Eunice developed “Life Support Centers” that cared for pregnant women and new mothers so they wouldn’t feel they had to abort their children.

Joe Long’s’s The Heroism of Captain Georg Von Trapp. What The Sound of Music Doesn’t Tell You

Peter Wolfgang’s A Politician Who Said No! to the Pro-Abortionists

He thought what he thought and did what he did because he believed God called him to it. In a commencement address, he urged the young people in front of him to live like the people at Birthright and Mother Theresa. “Because their work is God’s work, and their way may well be the only way, because it’s God’s way.” I wish he’d been more articulate about the relation of his faith in God to his work on earth, but he was of a generation who prayed but didn’t think they had to talk about it.

Shriver was also, once, one of the elite, a man who was always in the news. He’s now not much remembered, except perhaps through the Peace Corps, which he founded, and for the Special Olympics, which he helped his wife Eunice create. And maybe for being the second-choice candidate for vice-president in the Democrats’ doomed 1972 campaign.

Being a Public Christian

Why do I bring up someone now so obscure, who represents a political life we pretty much never see today? It’s impossible to find his like among the Democratic party today. Just one congressman, Dan Lipinski, and the party’s left wants to take him out of office. But no more Sargent Shrivers.

I bring him up because he teaches us something about being a public Christian. I’m thinking about one lesson in particular, about practicing what you preach, which at least once for Shriver meant letting God’s power be made perfect in his weakness.

Though sadly a little clueless about his father’s faith, Mark saw how it formed his father. In his eulogy, he described his father, “on his knees, acknowledging that he needed God’s help and guidance every day of his life. He knew that if he gave himself to God and asked God to be in control, then it was going to be a beautiful day.”

His father was diagnosed with Alzheimer’s in 2003, at 88. As he started slipping away, Mark asked him, “Dad, you’re losing your mind. How does that make you feel?” Sargent answered, “I’m doing the best with what God has given me.”

Here’s the lesson. In his biography A Good Man, Mark quoted a speech his father gave in 1964. “It is only with this compassion,” Sargent said,” that man can look upon man — through the mask of many colors, through the vestments of many religions, through the dust of poverty, or through the disfigurement of disease — and recognize his brother.”

Moving words, sincerely meant. But hard to live out. His father, Mark added, “knew this was not easy. Even for himself.”

Mark writes of a speech his father gave four years after he’d talked about compassion and about looking at his brother. He found the speech only after Sargent died in 2011.

Sargent spoke of visiting a Malaysian hospital where some Peace Corps nurses worked. One of them invited him to see the leper ward where she worked. “I didn’t want to see her ward,” he said, “but how could I say no if that girl was in there? … That girl worked there to bring peace on earth. Not the abstract kind of peace that politicians talk about, but the peace that men feel in their bones when they are loved, or fed, or clothed, or housed.”

Most of us will know exactly how he felt. We worry now about getting the Coronavirus. If it comes to America, we’ll all change our lives to avoid it. People sick with it will be our lepers.

And this was real leprosy, which Sargent would have remembered from the Bible stories of people declared unclean and sent away when they got it. He went into the ward anyway. “So I went, and I’ll never forget when I grabbed that first [hand] and shook it. I was scared. I shouldn’t have been, but I was.”

A man who talked so much about hope and compassion and helping others, didn’t want to go into the leper ward. Mark felt stunned. “He was scared of shaking hand with someone with leprosy? He was following the lead of a young Peace Corps nurse and not leading? He hadn’t been totally fearless and unwavering after all.”

Though scared, his father went anyway. Sargent Shriver shook the hands of lepers. To touch his brother and sister was God’s way.

A Politician Who Said No! to the Pro-Abortionists

Should Christians Be Involved in Politics?