In theaters this week, I Still Believe recounts the early years of Christian music artist Jeremy Camp. He shares why this movie matters. 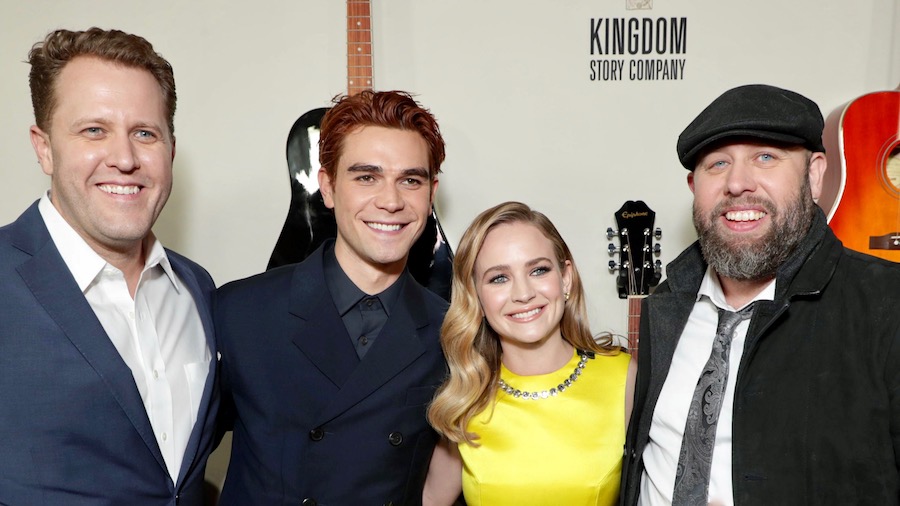 On March 7, 2020, the stars and co-directors of I Still Believe attended a premiere screening at ArcLight Hollywood in Los Angeles, California. K.J. Apa and Britt Robertson are flanked by Kingdom Story Company co-founders Jon Erwin (left) and his brother Andrew.

“I love the scene of her worshipping at that event,” said Jeremy Camp in a phone interview. An upcoming inspirational biopic shows how he and college sweetheart Melissa Henning first met.

He continued: “They really captured what attracted me to her. Just going, ‘Whoa, something is different about this girl.’ That was the whole start of how I began to fall in love with her.”

Audiences nationwide are eager to see I Still Believe, opening March 13 in over 3,000 theaters nationwide — a new benchmark for any Christian-produced film.

For some, the appeal will be seeing the life story of platinum-selling recording artist Camp unfold. For others, it’s watching the latest from brothers Jon and Andrew Erwin, whose last film I Can Only Imagine was a massive hit.

But their fanbase hardly compares to teen frenzy over the new film’s leads.

“Casting K.J. Apa and Britt Robertson is a huge win,” said Madeline Carroll, part of the movie production team. “Stars like that get people into theaters who don’t see faith films and certainly wouldn’t darken the door of a church.”

As a romance, the film differs significantly from Imagine. “You’re going to see the love between a man and a woman,” said Camp. “The whole depth of that journey is there.

“But God’s love is really shown through this film, which is my testimony up on the big screen.”

“You’re going to see the love between a man and a woman. But God’s love is really shown through this film.” – Jeremy Camp

“It’s been neat to watch what God is doing in his life,” said Camp. “He even told me: ‘Man, this has been really impactful for me. I want this kind of faith, love, and understanding.’ I’m encouraged by it.

“He is all in for the film, and I believe God is going to use it and use him to reach this next generation.” 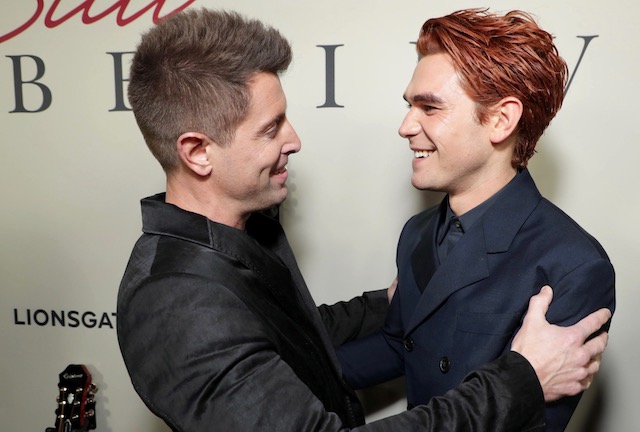 On March 7, 2020, Jeremy Camp (left) and K.J. Apa embrace on the red carpet at the Los Angeles premiere of I Still Believe. (Photo: Eric Charbonneau / Lionsgate)

The Erwin brothers have long called Michael Catt their pastor. Lead minister of Sherwood Baptist Church in Albany, Ga., Catt sees potential for the film to reach the unchurched.

“At the end of the day, somebody’s story is their story,” said Catt in an interview. “So you’ve got to go: ‘OK, I may not get this whole Christian worldview thing, but this really happened to him.’ That’s powerful.” 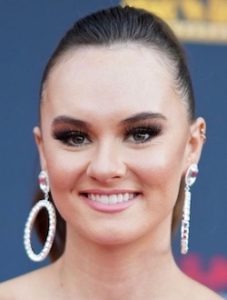 Carroll notes a higher purpose at play than simply getting teens into theaters.

“In 2020, everything’s about Instagram and the way you look,” she said. “Kids in high school aren’t thinking: What is faith? And do I have faith? This movie is about what’s going on on the inside.”

An actress who has appeared in Flipped and several films, she has begun to transition to a writer-producer. Several young filmmakers including Carroll were mentored on-set last summer.

She reveals how the filmmakers brought to life a difficult scene, where Camp reads a letter from his darling.

“K.J. was a little scared to do the scene, because he had to cry,” said Carroll. “Andy gets on set and says, ‘I have a surprise, just trust me.’”

The director called action. What Apa didn’t know was that Erwin had pulled aside lead actress Robertson, who had been absent for several scenes.

He had recorded her reading the letter and now played it over the loudspeaker on-set. Suddenly Apa had something to react to.

“He was like a dam,” she recalled. “He just opened up and started crying. It was beautiful to watch someone discover that — not only in the scene, but also for himself as an actor.”

From Miracle Healing to Unexplained Loss

The film relates the complexities of real life, when Camp’s fiancée initially was diagnosed with ovarian cancer.

“That was devastating to us, to think we’d never have our own kids,” said Camp. “We had so many people praying with us around the world.” 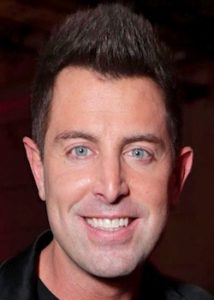 I Still Believe presents how she initially experienced healing. “The doctors said: ‘We went in there and we did not see any cancer,’” he recounted. “For me, I don’t care if people believe that or not. It may sound crazy, but that’s what happened.”

In a beautiful cinematic sunset scene, the two are married. But the story doesn’t end there.

“God gave us a full opportunity to see his hand upon our lives and give us some hope,” said Camp. “I do believe she was healed, which was one of the hardest things about it.”

Even after years, an emotional edge remains as he recounts losing Melissa. “I got really mad and was left in the wake of despair for awhile,” said Camp.

“All I had was the scripture: ‘This light momentary affliction is nothing compared to the weight of glory stored up for us in heaven.’”

Still, Camp refuses to mute the reality of loss. “— Not that I understand it, but I can go: ‘OK, Lord, you suffered and bled and died for me. This is a part of allowing me to have a different understanding so I can minister more effectively.’”

In the end, the film uses one couple’s story to explore suffering — often the biggest hang-up people have to accepting faith.

While the film will increase visibility for Camp, who’s currently packing out arenas on tour, the artist has a bigger mission in view. Evangelistic outreach Speaking Louder Ministries, led by he and his wife Adrienne, has projects active in six nations.

“There’s a long-lasting effect here that goes deeper than music,” said Camp. “In Uganda, over 35,000 people showed up when I played at an event and a thousand people responded to the Gospel. But we didn’t just leave it there. We built a medical facility in Entebbe that has now provided care for 50,000 people.”

“Fill in that blank in your life,” said Carroll. “If God is so big and powerful, why didn’t he do this for me? That’s a big reason many people step away from faith or they’re just not interested in it at all. This movie does a really good job grappling with it.”

Pastor Catt urges local churches to get behind I Still Believe. It’s the first production from Kingdom Story Company, an entity founded by the Erwin Brothers with backing from Lionsgate. Other films are on the way, including a biopic of NFL star Kurt Warner in December.

“The vision for Kingdom is to move out of the niche and make broad-based films,” said Catt. “Everybody loves a love story. And nobody will live their whole life without pain, suffering and hardship. This movie is a real opportunity.”

Developing his story as a film began eight years ago. Now Camp considers the timing of this release providential.

“People are going through hardships and hopelessness right now,” said Camp. “This gives you the answer, which is Jesus. Putting your faith and trust in him is the only way you can get through it.”

Rated PG for thematic material, I Still Believe opens nationwide in IMAX this Wednesday and theaters everywhere on Friday. Watch K.J. Apa below discussing the new film on “The View.”

How to Be Free in Your Marriage