An advocate of Christian films for decades, Pastor Michael Catt reveals how he's been “in, not of” Hollywood … and how he got unexpected help from praying firefighters. 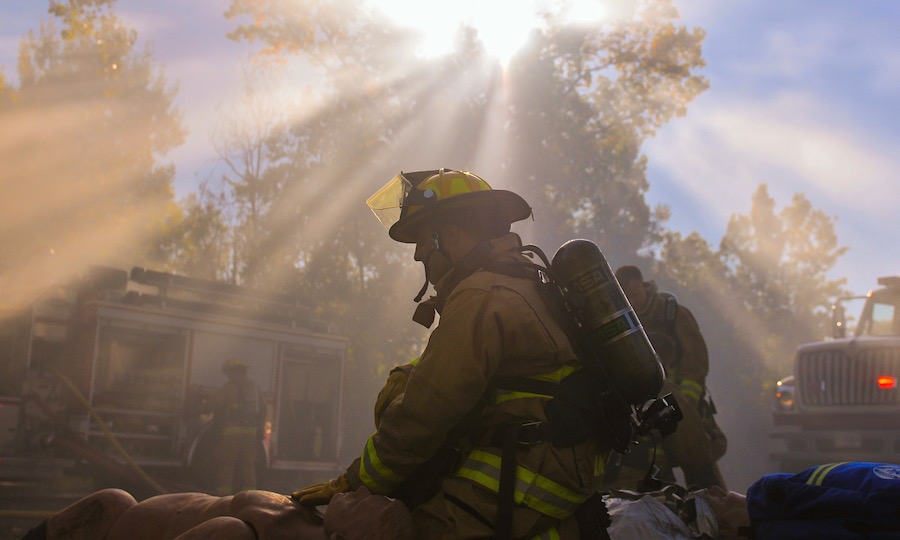 An airman of the New York National Guard kneels among the rescued simulated survivors of a fire during an exercise held on Hancock Field Air National Guard Base.

Meet Michael Catt, the pastor with an IMDB page whom several Hollywood executives have gotten to know. He has led Sherwood Baptist Church in Albany, Georgia, for nearly 30 years and has been involved in producing and promoting faith-based films for most of that time.

“Everybody loves a good film,” says Catt in a live interview. “It’s a leveling ground that reaches the common man. Who did Jesus reach? He reached the common man, including prostitutes and tax collectors who were hated by the culture and religious people.”

More than discussing films, Catt has backed up his words with funding and support. In 2008, their church-produced movie Fireproof became the year’s highest-grossing independent release, earning $33.5 million at the box office. It led to major opportunities for the Baptist pastor.

“Fireproof brought forward how, for first responders, 80 to 90 percent of their marriages end in divorce,” he recalls. “It got Dr. Phil’s attention.” In an episode focused on helping those on the front lines, Catt appeared on the top-rated daytime talk show along with director Alex Kendrick and star Kirk Cameron.

In 2013, the Georgia megachurch decided to fold their direct funding of movies. Yet Catt remains active in supporting faith-driven film initiatives. The Kendrick Brothers are active members of his church, and their mutual friends the Erwin Brothers have announced the launch of Kingdom Studios.

Now, the pastor details why he believes Christians should be involved in entertainment … and shares some surprising help his team received at a critical moment.

The Myth of the Bible Belt

As a pastor, how do you see films as part of your ministry reaching people for Christ?

Pastor Michael Catt: This is a post-Christian world we live in. I live within what’s called the Bible Belt in southwest Georgia, but it’s not that. Stats show 88 percent of the people in my county do not go to any church, anywhere. This idea that there’s this “line” in America where everybody goes to church and loves God is a mythical line.

There may be a lot of people who know about religion, but we really are post-Christian because of what’s happened in our culture over the past 40 years. My fear is, we gripe about it and post on social media about it, but we never give an alternative.

Paul said in one of his epistles: I have a better way. We never say that. We’re trying to argue each other down, that we don’t like this politician or that one. We want to boycott this or that.

I’m all for: How do we let people know we love them? That’s what Jesus did. In the gospels, the people received him gladly.

He reached the common man, which is what a film does. When you sit in a movie theater with somebody, you don’t know if they’re rich or poor, and you don’t care if they’re black or white.

You don’t know anything about them, but you all went into a room for the same reason. You wanted to be entertained, encouraged, or inspired.

First Responders Behind the Scenes

When you and the Kendrick brothers had such success with Fireproof, it seemed like your distributor Sony Pictures was as surprised as anybody.

Catt: When we first started with Sony, people there were not believers but were highly respectful of us. We were never treated like we were secondary citizens or with any disrespect. They distributed the films, but our ministry Sherwood Pictures owned the story.

The day before Fireproof released nationwide, I can remember a meeting with a gentleman who was a high executive at Sony. We were walking on the studio backlot. He said, “We’re not sure we get you. You show these movies for free to a bunch of pastors and then you ask them to buy a ticket to go see it again. We’re not sure we understand how this works.”

I said: “You know what, it’s God. God has chosen to bless it. What are your people saying Fireproof is going to do?” He said, “Oh, it’s gonna do two or three million, maybe four million tops.” It played in only about 400 theaters. Then it opened in the Top 10 and made way more money than they thought it would make.

A bunch of firefighters had gotten tickets to that show. They were praying for us the whole time…

In so many ways, God has shown up like: Surprise! I’m here and I’ve got this under control. That same week, Dr. Phil had an episode called “Fireproof Your Marriage” on the pressures first responders face.

In one segment, he invited Alex Kendrick, Kirk Cameron and me on to talk about the film and how Kirk’s character wins the heart of his wife back.

We shared about unconditional love and other biblical ideas. We didn’t know it at the time, but a bunch of firefighters had gotten tickets to that show. They were praying for us the whole time we were filming that episode!

Have you seen Christian filmmaking evolve over the past decade?

Catt: It has. With Christian films, what you look for is excellence at the level they can provide it. There’s a difference between excellence in Facing the Giants, which we produced for $100,000, and excellence for the Kendrick brothers’ movie War Room, made for about three million dollars.

With Giants, our first feature-length film, we were picking wardrobe out of peoples’ closets! It’s a film with a great story, but we know its limitations too. Because it was about football, churches got high school kids to go see it. Thousands of lives were changed.

A bigger budget changes what you can do with cameras, editing, color correction, all that — even the sort of actors you can get. Some say, We only want to use Christian actors. But then you go to the other side of that and ask: How do we use the making of films for evangelism?

Think about the gaffers, the camera people, lighting and sound people, and the catering folks. How do we ever show Christ to lost people if we stay in holy huddles? We need to enter into dialogue with people that are having conversations we’re not having.

Too often, all pastors do is hang around with other Christians and talk about how the Easter service went. Let’s get into conversation with people who are asking questions that we may not even know how to answer. Then we need to learn how to answer them.

How can the church get outside of its “holy huddles” and better engage the culture?

Catt: It’s a hard question, because one hundred churches are dying every day in this nation. They’re dying because they quit looking outside. Pastors and leaders drive through their neighborhood with their blinders on and pull into their parking lot.

The demographics of our churches are getting older and older. We’ve got to ask: Who is doing anything for our kids? My church is located in Albany, recently named one of worst cities in America on poverty and health. Many kids in our elementary, middle and high schools don’t eat unless they eat a school lunch. So they’ll go all summer without having good meals.

This year at Vacation Bible School, we provided free breakfasts and free lunches for all the kids who came. We’re not going to say: You can’t eat unless you ask Jesus into your heart! But we are going to act on what Jesus said: “I was naked and you clothed me. I was hungry and you fed me. I was thirsty and you gave me drink.”

Pastors drive through their neighborhood with their blinders on and pull into their parking lot.

We do food distributions into the poorest parts of town. Our church does free car repairs for widows and single moms. We try to do things that help us engage people who normally would never think about setting foot in church. You might call it pre-evangelism.

In this culture, we have to earn the right to be heard. Honestly, the world has heard a lot of people who call themselves Christians that don’t behave very well. We have to overcome that. Jesus said, If you want to be great, be a servant. One of the ways we serve is by buying somebody a movie ticket. Give somebody a free meal. Do something in somebody’s life.

Are you going to leave a church empty and a building for sale? Or you going to you reach them with something they were interested in and proclaim the true gospel of Jesus Christ to them? Because when they get inside the church, they’ll find out their heart cry for justice has everything to do with Jesus.

Learn more about Sherwood Baptist Church and the ministry of Michael Catt. He has expressed his excitement about I Still Believe, coming to theaters in 2020 (teaser trailer below). Sign up to receive top stories from The Stream every week.