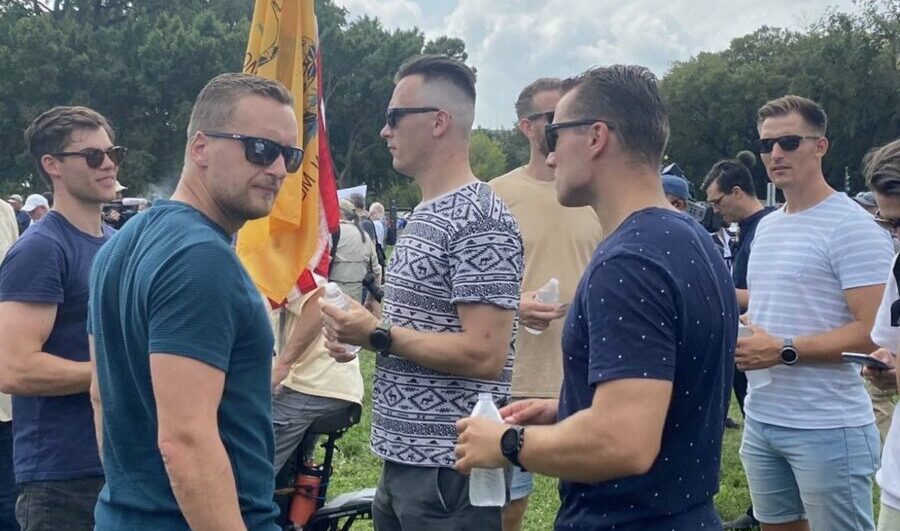 In a column last week, I warned Stream readers not to walk into a trap. Some well-meaning patriots had organized a rally to take place in Washington, D.C., to call attention to the political persecution of January 6 protesters. But chatter was strong that FBI agents and other plants from the Deep State would be infiltrating the crowd. That they’d quite likely include undercover agents seeking to provoke or simulate violence. (The way that such provocateurs concocted the plot to kidnap Gretchen Whitmer, and likely were behind the only real violence on January 6.)

A big crowd of boisterous patriots that showed up would be attacked by the police perhaps more savagely on January 6, where cops killed at least two unarmed citizens:

The biggest untold story of January 6 is how USCP and DC Metro police attacked protesters with explosive devices, chemicals, and rubber bullets. The tunnel was the site of intense fighting. It likely contributed to Boyland’s death.

Such a police riot would land more good Americans in jail — where they would sit indefinitely, in solitary, suspected on secret evidence, and damned by George W. Bush as “children of the same foul spirit” as the al Qaeda hijackers on 9/11. And the video evidence of what happened would be kept secret, as 14,000 hours of video proof of January 6 now sits in FBI vaults, denied to defense attorneys.

Winners Don’t Throw Their Wounded Under the Bus

Meanwhile, traitor Republicans like Liz Cheney, and Kevin McCarthy, and the editors at National Review, would fall to their fainting couches at another act of “insurrection.” Or fall all over themselves praising the Deep State operatives trying to imprison those poor citizens. You didn’t see Democrat congressmen or liberal publications agonizing over the George Floyd riots, which killed some 15 Americans and trashed whole neighborhoods. Why?

Because the left aren’t losers, who throw their own under the bus. They see that the power to commit street violence and get away with it is crucial to silencing dissent, and a sign that your side is winning. When the other side’s people hide in their homes and hope that the cops just might protect them, or that next time maybe the election won’t be stolen? That’s the side that’s going to lose. High-mindedness has absolutely nothing to do with it, except as the mask for cowardice and denial.

A Conspiracy of Feds

Back to the recent protest in D.C. Amidst many warnings, including from Donald Trump, that the Justice for January 6 rally might prove a “trap,” nobody showed up. I mean nobody, except a couple of dozen diehards, dozens of reporters, hundreds of Capitol Police and … a suspiciously large crowd of white guys in Abercrombie and Fitch gear, with crew cuts and sunglasses. Or as conservatives joked among themselves: Feds, whole conspiracies of feds. (I know that “conspiracies” is traditionally used only as the plural form for gibbons, but it’s time for that to change.)

The effect was hilarious, as Larry Taunton observed:

Did the #feds think they were going to a #fake #Trump rally or a #GRINDR hookup?#J6rally #Jan6 #January6th pic.twitter.com/EBzQcfUrCj

Like most conservatives, I was relieved that good people had dodged a Deep State bullet by skipping the rally. As Dinesh D’Souza put it:

Apparently fewer than 100 people attended the FBI entrapment rally billed as a protest on behalf of the #January6 defendants. The FBI showed up in force, as did the riot police and the media, but the ordinary citizens who were the real targets outsmarted them all by staying home

All in all, a win for the good guys, right? I’m not so sure. Or if this really was a win, it means we’re far worse off here in America than any of us is admitting.

The harsh truth is: I’d wanted to go to that rally. I was bitter when I found out it had turned into a glue-trap for catching American dissidents. If we’re going to say that what happened was a victory, we should say it in Czech accents, since we’re speaking like beaten-down civilians in Prague, 1968, or one of Milan Kundera’s stories set in that time. In that sense then:

Yes, comrades! The People won a victory this weekend. It is true that we could not gather in our own nation’s capital for peaceful demonstration. And that the State media could portray this as proof of total apathy about the abuse of political prisoners in our Gulag, who are locked up on secret evidence for questioning the theft of the last election. That we could not do so because secret police honeycombed the crowd with agents we thought would foment crimes, blame them on us, and throw us too in prison.

But at least we outwitted the secret police, and are not now in prison! Now join me in grim laughter and some shots of vodka to celebrate … .

Four years ago, the very idea that Americans would be forced to avoid a civil political demonstration in Washington, D.C., for fear of FBI entrapment and indefinite imprisonment would have made us all laugh. Or at least made us violently angry. Now, after four years of the Deep State, the permanent government, and our Stasi media and Pravda social media beating us down and punishing us for voting wrong in 2016?

We laugh, but as we do so we look over our shoulders. We wonder what next abuse our masters have in store for us.

We Joke About Stalin’s Mustache

And none of this will change until we have purged, to the very last person, the collaborators in our ranks. My litmus test for a politician or thinker used to be abortion. That’s still a crucial issue, but the bar has gotten higher. Now I judge a person by how he reacted to January 6.

If he claims that it was an “attack on democracy” or any such Stasi nonsense, he’s now my enemy. Because he’s working for the Deep State and the Antifa thugs and the Facebook censors, whether he realizes it or not. But on some level he likely does, and it makes him feel a little bit safer. I don’t have time for such sellouts. Life’s too short and so am I.