Grading Trump on His COVID Performance: Did He Really Kill All Those People? 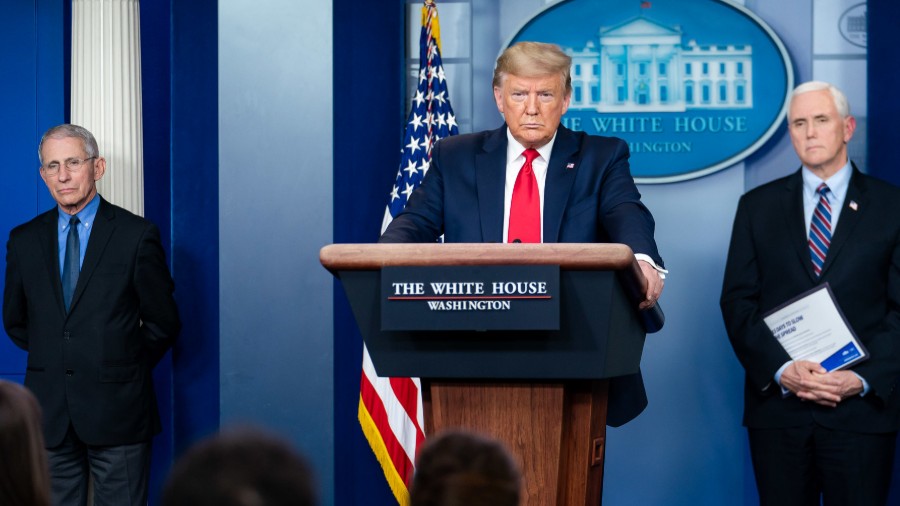 Joe Biden, in his bumbling way, has accused the president of being responsible for all 200,000 (plus or minus three zeroes) American deaths from COVID-19.

Is anyone surprised? Of course not. Most of us once thought the fact that Trump is often obnoxious would keep him out of the White House. Plenty of people will still vote against him in November for that reason. But no, he hasn’t blown up any countries (I note with relief), while his enemies are burning down cities right and left (mostly left). So a few crude Twitter comments plus his other faults are not going to keep me from voting for him this time.

The Left has redefined “obnoxious,” and not even Donald Trump can compete. (You know that’s true when the big question to ask now is, “Which cities will they torch next?”

But what of the “COVID-killer in the White House” theory? Should it stick? This has become the chief argument for the prosecution, so it is worth examining.

To judge an action fairly, one should recognize the extent and limits of the actor’s power. So one must consider both the advantages and disadvantages which American leaders faced during the COVID crisis, compared to other countries.

America held at least three relative advantages in that fight:

1. We had a few more weeks to prepare than China, South Korea, Iran or Italy.

2. Our population is a few years younger, on average, than the Wine and Olive Oil belt of southern Europe.

3. We host many of the worlds top universities, with sharp scientists, wealthy drug companies and well-endowed hospitals.

1. We are “The United States of America.” We have a federal system, which means the president can’t even put fires out in downtown Portland if the mayor prefers to let them burn. Still less could the federal government run the entire anti-COVID operation: the federal government depended on 50 local governors to act wisely.

2. Among those governors was Andrew Cuomo, who made several reckless decisions causing COVID to spread like wildfire through nursing homes in New York State, and around the U.S. (At one point 60 + % of COVID wildfires were traced to New York.) Mortality outside of the Northeast was not that much worse than in Canada. Cuomo’s public spats with New York City’s epically hapless Mayor Bill de Blasio cannot have helped.

3. Americans are the most obese people among major nations in the world, with four times a higher percentage than Italy. Obesity raises the risk of death from COVID by almost half. If Americans were as thin as Italians or Japanese, that factor alone would likely have saved many tens of thousands of lives.

4. Americans are older than people of most countries outside of Europe.

Advantages That Were Disadvantages

5. We have frequent flights to the cities most-infected.

6. America is also more ethnically diverse than Europe. Some minorities who have proven vulnerable to cardiovascular illnesses have also succumbed from COVID-19.

7. Ironically, our generally clean air likely also proved a disadvantage in this fight. A million or more Chinese die each year from air pollution, according to one study. That means urban Chinese own lots of masks, and are used to wearing them (especially in winter, when stagnant air hangs over northern China, and when the outbreak occurred.) The same is true in Taiwan, Korea, Japan (to a lesser extent) and parts of India. Americans did not manufacture many masks at the beginning of this crisis, and ran short.

8. We also lack much recent experience in deadly pandemics. Korea fumbled badly with SARS, a learning experience that helped that country respond more aggressively and quickly to their COVID outbreak.

9. Americans are concentrated in metropolitan areas, not on farms or villages as in many poorer countries.

10. Government bureaucracy interfered with COVID testing. Hospitals were chomping at the bit to start testing, but the CDC, having created flawed tests, refused to allow them to do so. This probably cannot be blamed on Trump, since the bureaucracy seems to have been in place before he arrived, and he has tried to reduce bureaucracy, in general.

11. We share a border with Mexico, which fumbled this ball as badly as almost any nation on Earth. Some of our fatalities seem to have been of people who contracted the disease in Mexico, and then came to the U.S., sometimes for treatment.

12. Finally, as I have argued here before, culture matters. Germany dealt with COVID-19 admirably, but most citizens of Germany are Germans. In the 19th Century, General Lee complained to a Prussian military observer that while southerners were brave, “Our people are so little liable to control that it is difficult to get them to follow any course not in accordance with their inclination, … Give me also Prussian discipline and Prussian forms, and you would see quite different results!”

True, American soldiers twice ultimately proved themselves at least the equal of German troops. But Lee recognized a difference between what are called “loose” cultures and “tight” cultures. By and large, in Europe COVID seems to have struck hardest countries where the Romance languages, descended from Latin, are spoken. Several countries in Latin America have also been struck especially hard: Brazil, Mexico, Ecuador, Peru.

Americans are less-inclined to obey government orders than Germans, Japanese or Chinese, who reacted quickly and effectively to COVID. Often that quality of independence is a blessing. Sometimes it may cause problems. Certainly China’s experience of locking people up in large numbers proved helpful when this pandemic got into full swing. (While Chinese numbers are not perfectly accurate, China did manage to shut the disease down.)

Like Brazil, we have a more “loose” culture. (Or set of cultures within a range.) So responsibility for staying well, or getting sick, rests primarily with the individual in America, once the disease was on the loose. But unlike Mexico or Ecuador, Americans tend to have a pretty good handle on figures, so deaths get counted.

With all these factors in mind, I’d give Donald Trump a C+ on COVID, trending towards a B-.

Trump certainly did not save two million lives, as he brags. (Making the disease too much about him, and the media as usual playing along.) But neither did Trump cause 200,000 preventable deaths. American presidents simply do not have the power to control society so thoroughly.

Trump did stop most travelers between China and the U.S. (Including me!) His administration also finally began to loosen red tape, too slowly. (I was pushing for the import of masks.) Trump’s opposition to bureaucracy has proven a healthy and useful philosophical stance, as did the “Energizer Bunny” mode into which he ultimately clicked.

So no, Donald Trump should not be blamed for COVID: our health, fellow Americans, lies mostly in our own hands.

Would any of the Democrats have acted more quickly and effectively? Maybe one would have. But it’s hard to imagine that one being Cuomo, de Blasio or Pelosi.

How would Joe Biden have done? Armchair quarterbacking is easy, and he’s doing a lot of it. It seems as if “Sleepy Joe” is spending a lot of time in that easy chair of his. He can’t even seem to wake up to campaign for the job.