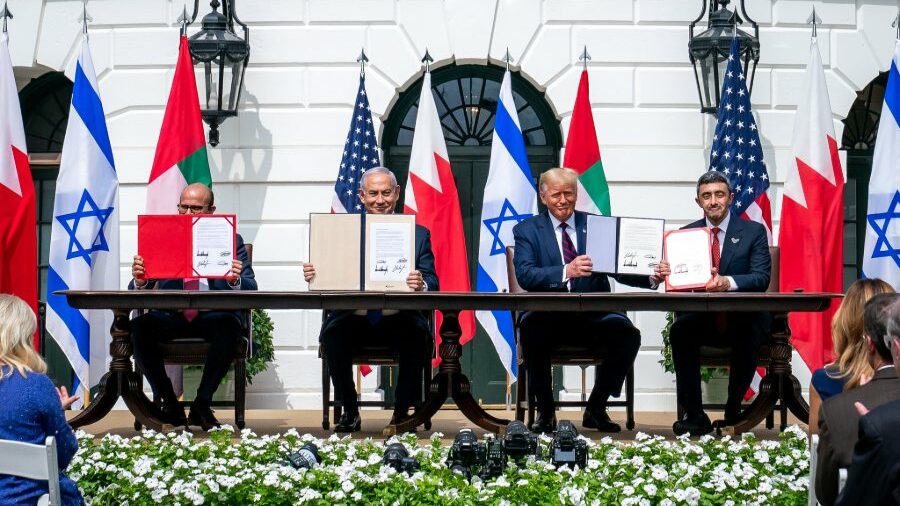 There are many great lines in Ghostbusters. One of the most famous is when Dr. Raymond Stanz (Dan Aykroyd) tells Dr. Peter Venkman (Bill Murray) “I’ve worked in the private sector. They expect results.” Perhaps I’m oversimplifying, but that sums up the difference between Trump and other presidents, particularly in foreign policy. Sure, other presidents staffed their Cabinets with former CEOs. But for the most part even former businessman Republicans defaulted to the State Department apparatchiks. This inevitably privileged process over substance. Trump, on the other hand, was the consummate businessman-POTUS. He wanted results. And for the most part, he got them — particularly in the Middle East.

Trump’s biggest successes came with the Israeli-Arab issue. When he came into office, the only Arab nations at peace with Israel were Egypt and Jordan. By the time he left office, there were four more. The United Arab Emirates, Sudan, Morocco, and Bahrain. Unlike the first two, none of these had ever fought the Israelis. And of course they had their own self-interested reasons for normalizing relations. But the fact remains, these diplomatic coups were historic. They lowered the threat level in the region.

Both Trump and his lead negotiator, son-in-law Jared Kushner (as well as his deputy), have been nominated for Nobel peace prizes. Does anyone seriously think either will win, however? Joe Biden derided these achievements as “accidentally” making peace. Something akin to accidentally becoming president, it would seem. However, then-candidate Biden also tried to give Obama credit for them. On the third hand, Corn Pop’s old nemesis complained that Trump was abandoning the Palestinians. Which the Arabs signing the deals had no problem doing, note. And Biden accused Trump of endangering Israel in other ways. How? By mothballing the JCPOA (Joint Comprehensive Plan of Action), the “Iran Deal.”

Let’s look at that, Obama’s signature foreign policy initiative. Signed in 2015, it roped in the Chinese, Russians and Europeans as well as Iran. The goal, supposedly, was to slow down the Islamic Republic’s nuclear program. One which many suspect includes nuclear weapons as well as power. This despite repeated Iranian denials of wanting nukes. At least until they change their minds.

The Trump Administration pulled out of the deal in 2018. Why? Iran’s ongoing military buildup, its construction of nuclear-capable missiles, and its helping Shi`i groups kill hundreds of Americans in Iraq. In addition, Iran has been listed as a state sponsor of terrorism since 1984. So Obama’s sending the ayatollah at least $1.7 billion dollars (and possibly much more), along with the sanctions lifted under the JCPOA, had helped the Shi`i theocracy stay afloat. Trump, again expecting results, wondered why Iran was still funding terrorism and building intermediate range ballistic missiles.

Plus, he shared the view of the Israeli and Saudi leadership that Iran was the major threat to both of them. So he deep-sixed it. This, along with sending Iranian strategist Qassim Soleimani to meet the houris, curbed Iran’s enthusiasm for trouble-making.

The Biden Administration is hell bent on returning to the JCPOA, however. Secretary of State Antony Blinken warned that unless we do, Iran could build a nuclear weapon in “weeks.” And Iran’s leadership is doing its best (or worst) to back up the scaremongering.

Last week we heard that Supreme Leader Khamenei might retract his alleged fatwa against nukes. (Which no one has ever actually seen.) The ayatollahs desperately want the sanctions, which Trump had reimposed, lifted. And they want nukes. But not to use on Israel. Rather, as regime insurance. Still, the Twelver Shi`is in general and the ayatollahs in particular have refined taqiyya, or lying to non-Muslims, to a high art. Why any Western diplomat would believe them on this issue (or any other) is a mystery. Yet the Washington Establishment continues to do so.

As for Afghanistan, Biden’s handlers have already signaled they will continue our forever war there. Trump’s plan to wind down the war — which has lasted longer than both World Wars and the Civil War combined — was the best that could be devised. (As I pointed out 11 months ago.) And under Trump, for the first time in two decades of U.S. occupation there, none of our military members were killed there in the past year. But good news is no news that anyone in the military-perpetual complex wants to hear. U.S. troops should stay in that fundamentalist Muslim hellhole till the Mahdi comes (back). Or beyond. The Democrats are willing to fight to the last Marine there, it seems.

Finally, Trump’s results-oriented Middle Eastern policy took out the two most dangerous and influential anti-American Muslims in the region. ISIS’s “caliph,” Abu Bakr al-Baghdadi and Iranian Quds (“Jerusalem”) Force General Qassem Soleimani. The killing of the former by U.S. Special Forces, coupled with changes in U.S. tactics and strategy, destroyed ISIS’ territorial state. It’s now relegated to controlling a few oases in the Syrian hinterland, and operating once again as a (mere) terrorist franchise. Sending the latter to meet the houris was not only just deserts for having masterminded the murder of Americans. It put the ayatollahs on notice that they might be the next recipients of a U.S .drone strike. And it curtailed Iranian belligerence in the Gulf and elsewhere.

Of course, Biden decried it at the time as inflammatory. ISIS and Iran strategy converge in Syria. And Biden’s Iran envoy, Robert Malley, may indicate that the new administration is less kneejerk anti-Trump in this area than in others. Malley is seen as somewhat pro-Iran, but because of that he also opposes those who blame Syrian President Bashar al-Assad for the country’s problems. As long as Biden doesn’t commit Obama’s error of mistaking Sunni fundamentalists for “moderate rebels,” the U.S. may avoid more mistakes there.

Some sage once said, “a man is judged by the quality of his enemies.” (Oscar Wilde? Kahless the Klingon? Inigo Montoya?) Trump’s Middle East policy opponents: Palestinians, Iranians, and American nomenklatura who love incessant American military occupations. Trump’s supporters: Israelis, Saudis, moderate Arabs and his countrymen tired of trying to turn Kabul into Kansas City. Biden, by and large, will flip the script on opponents and supporters, to the detriment of the region and American interests.

But then, we can’t really expect results from Biden. He’s never worked in the private sector.