Do Iran’s Leaders Want to Hotwire the Apocalypse?

Too many American Evangelicals have been misled about Iran's intentions. 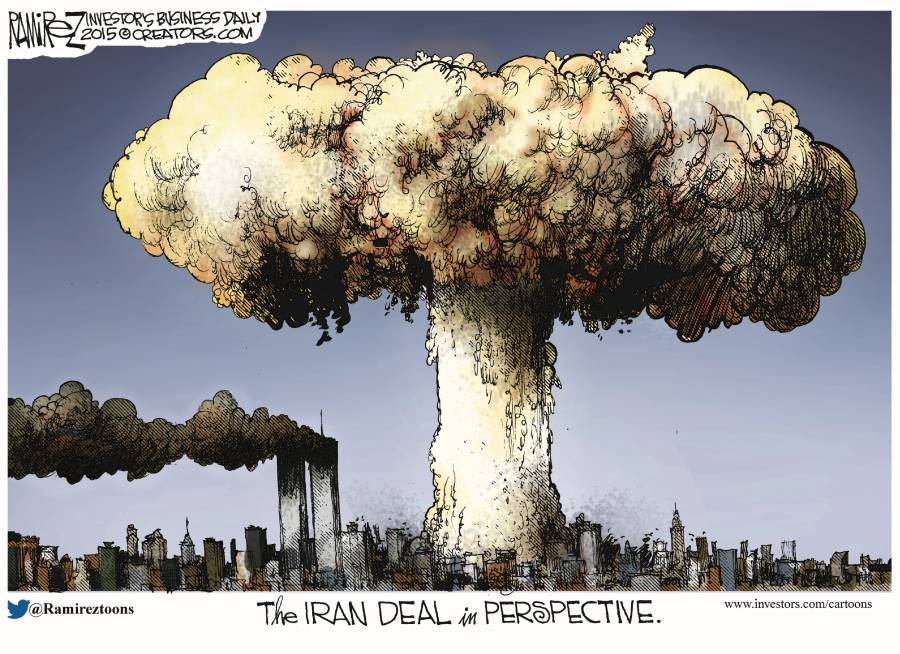 The Islamic Republic of Iran is, to purloin President Trump, a “bad hombre.” But its malice didn’t start last month. Nor when Trump abandoned Obama’s naïve “Iran Deal.” The State Department listed it as one of four state sponsors of terrorism in 1984.

The ayatollahs’ Praetorian Guard, the Iranian Republican Guard Corps (IRGC), earlier this year made the foreign terrorist organization roll. Why? It came to light that the IRGC had helped kill over 600 American troops in Iraq. On another level, Iran’s leadership dreams of being the vanguard of the returning messianic Twelfth Imam. He, they say, will make Iran leader of the worldwide Muslim ummah.

But wait. There’s more. The ayatollahs, since Khomeini, have claimed to champion the world’s oppressed masses. As such, they will avenge the Third World upon the arrogant powers, starting with America. Think Islamic liberation theology writ large. In Africa, Tehran is making friends but also establishing active terrorist networks. Globally, might Iran be capable of shutting down the US power grid via electromagnetic pulse (EMP) weapons? Or even pose an “existential threat” to the entire West?

So the warnings come to us via conservative and Christian media. But how truthful are they?

Do Iran’s Leaders Want to Bring on the Apocalypse?

I doubt Iran’s ability to threaten North America. Much less all of Western civilization. But what about Iranian threats toward its lesser, regional “Satan,” Israel? How credible are they?

It’s true. Opposition to and vilification of the Jewish state is ingrained in modern Iran’s DNA. The Shi`i regime wields its revulsion for Israel as a club with which to beat Sunni states. It scorns Saudi Arabia in particular for its lack of “anti-Zionist” zeal. And Tehran does more than just bluster. It finances and arms two terrorist groups that regularly attack Israel: Sunni Hamas and Shi`i Hizbullah.

We hear Iran accused of wanting to destroy Israel at the first realistic opportunity. There are reasons to doubt this. Most of them have to do with translating correctly the Farsi statements of Iranian officials. My Farsi is just okay, but my research shows politicians there like to suggest Israel “will be wiped from the pages of history.”

Iran’s Leaders Are Waiting for Their “Second Coming”

But Iran’s Shi`i Islam doesn’t think human beings can initiate that destruction. Instead, it can only happen when the messianic “Twelfth Imam” returns. (Yes, Shi`i believe in their own “second coming.”) In other words, when Allah announces the End Times. Until then, Iran must be content with playing defense. This is a core tenet of Shi`i theology. Human actors must wait on Allah.

Nonetheless, many conservative leaders, American and Israeli, are convinced Iran is preparing “nuclear Holocaust” against the Jewish state. Newt Gingrich believes this. So does Israeli Prime Minister Benjamin Netanyahu. Even President Trump has said “Iran’s leaders routinely call for Israel’s destruction,” while leaving out the “nuclear” part.

The notion that Iran plans to act without waiting on Allah is popular among many Evangelical Protestants. See that message preached here.

But the origins of the claim almost certainly lie with Glenn Beck, himself not an Evangelical but a Mormon. He has been flogging the claim for a decade, starting with his perch at Fox News. In more recent years The Blaze has repeated it. Beck has fostered, for over a decade, a dangerous false narrative. In fact, he may be largely responsible for injecting it into evangelical churches and the GOP.

Beck has been claiming Iran’s leadership wants war, probably nuclear, with Israel in order to spark the return of the Twelver Shi`i messianic figure: the Twelfth Imam al-Mahdi. Here’s another conservative news source claiming that. And yet another.

That sounds like Iran is trying to force Allah’s hand, or “hotwire the apocalypse.”

Iran’s Shi`i teachings on jihad mandate that offensive holy war is banned until the Twelfth Imam shows up. The leadership’s own beliefs bar it from using nuclear weapons offensively. Against Israel or anyone else.

A Fantasy Version of Islam

Just as I was writing this paragraph, I received an online alert about the “Twelfth Imam.” A “Bible prophecy” outlet, “The Trumpet,” posted “Why Would Iran Start a War It Can’t Win? To Accomplish a ‘Divine Mission.’” The writer says that “chaos is a prerequisite to their messianic figure’s return, and many Twelvers believe they can hasten his reappearance by intentionally stirring up chaos.”

Whence came this idea? From Joel Rosenberg, an Evangelical fiction writer whom Beck has been promoting for years. Alas, even National Review gave Rosenberg a platform for his alarmist views: “Islamic Extremists Are Trying to Hasten the Coming of the Mahdi.”

There’s just one problem. Neither Rosenberg nor Beck understands Shi`i theology. In the course of gaining a Ph.D. in Islamic studies, I had to delve into that theology, in the original languages. So I’m qualified to point out for you some fundamental errors they make in videos like this one.

So Many Mistakes, So Little Time

Here are just a few of the things this dynamic duo claim that are simply wrong:

It’s true that Iran’s rulers often invoke the Mahdi, as did former President Ahmadinejad, and as clerics still do. But (and this is a very big but) they are the most vociferous opponents of anyone actually claiming to be him. Why? Because such a claimant would have a divine mandate to take power instead of them. That would end their reign, and their vast wealth, power and privilege. Claming to be the returned Twelfth Imam al-Mahdi in Shi`ism is next to impossible, whereas in Sunni Islam it’s been done repeatedly.

Iran’s Muslims Believe They Must Wait on God

Twelver Shi`i teachings on jihad mandate that offensive holy war is banned until the Twelfth Imam shows up. Even if Ayatollah Khamenei’s fatwa against nukes is fictitious (as it probably is), the leadership’s own beliefs bar it from using nuclear weapons offensively. Against Israel or anyone else. (Defensive use, however, might be allowed in the Mahdi’s absence.)

Most importantly: the return of the 12th Imam is not amenable to any sort of “hotwiring.” Like our Christian Second Coming, it’s solely in God’s hands. Twelver Shi`ism, based on my years of study (and my time there), lacks a concept of human-caused chaos forcing Allah’s hand. The idea of “hotwiring the apocalypse” does exist in Islam. But among Sunni jihadist groups, notably ISIS and AQ. I have no doubt that should either get a nuke that they’d use it against Israel or the US. (See my book Ten Years’ Captivation with the Mahdi’s Camps: Essays on Muslim Eschatology, 2005-2015, pages 31-67.) But Iran’s brand of Islam does not have any such belief.

As I noted earlier, the idea of forcing Allah’s hand does exist among Sunni jihadist groups. This was first noted by the late Israeli researcher Reuven Paz, in 2006. Rosenberg apparently took the concept and applied it to Iran. But it has no relevance there at all, any more than decrees by Pope Francis bind the Assemblies of God.

Beck has diligently broadcast this fundamental error until it became conventional wisdom on the Right, in Evangelical churches and the GOP side of Congress. Beck and Rosenberg have also shoehorned Iran into their interpretation of the Book of Revelation. I’m a conservative Christian, but I don’t think St. John intended his Revelation as a policy guide. Instead, discerning Iranian leaders’ intentions requires knowledge of that nation, its history, and its Shi`i beliefs. Beck and Rosenberg are woefully lacking in this department.

Iran’s leaders want nuclear weapons, make no mistake. But for regime insurance (the kind North Korea got) and to enhance their geopolitical clout. Not to employ against Tel Aviv. Or to force Allah’s hand. Doing so would go completely against the religious beliefs of most of the country and of its religious leadership. And it would sign Iran’s national death warrant.

Yes, President Trump should work as hard as possible to stop the ayatollahs from going atomic. For now, the sanctions he reimposed are working. If things change, perhaps the US may find it necessary to follow John Bolton’s advice and bomb Iran. But if so, the decision should be based on sober analysis of that country’s geopolitics and its leaders’ actual religious beliefs. Not on an eccentric reading of Revelation linked to a fabrication about Iran’s brand of Islam.

Timothy Furnish holds a PhD in Islamic, World and African history (Ohio State, 2001). He is a former US Army Arabic linguist and, later, civilian consultant to US Special Operations Command. He’s author of books on the Middle East and Middle-earth; history professor; and sometime media opiner (as, for example, on Fox News Channel’s “War Stories: Fighting ISIS“).