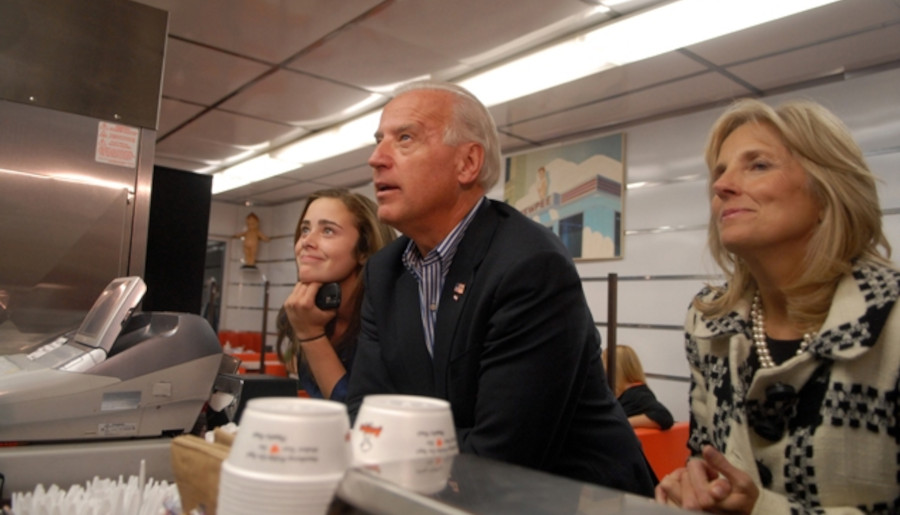 Joe Biden, his wife, Jill, and his granddaughter Naomi order at Kewpee Burger in Lima Ohio after a rally, Oct. 31, 2008.

My prayer for President Biden:

“Father, I ask you to reveal Yourself to him, to convict him of his sin, to save him and transform him, to give him a heart for righteousness, and to use him for the good of America.”

Can I get an Amen? Is there anything in that prayer that we, as God’s people, cannot come together and pray?

As of this writing, on our Facebook page alone, there are more than 7,000 likes, along with more than 2,600 comments, most of them offering their “Amen” to the prayer.

Others, however, could not add their “Amen.”

Some Objected to Accepting the Current Reality That Biden is President

For some, it was simply objecting to the words “President Biden.” They still do not see him as legitimate.

To them, I can only say this: Even if you are absolutely sure there was rampant fraud and you feel outraged that the election was stolen, the reality is that Joe Biden is now serving as our president. He lives in the White House. He has presidential powers. Congress recognizes him as president, as do our governors, as do world leaders.

So, to pray for “President Biden” is simply to accept the current reality. It is not to capitulate to his agenda.

Others could not agree fully with the prayer because they were convinced we should also pray down curses on Biden. As Stephen wrote, “Sure! I’ll add this prayer from Psalm 109,” quoting verses 7-14. What do these verses say?

When he is tried, let him be found guilty, and may his prayers condemn him. May his days be few; may another take his place of leadership. May his children be fatherless and his wife a widow. May his children be wandering beggars; may they be driven from their ruined homes. May a creditor seize all he has; may strangers plunder the fruits of his labor. May no one extend kindness to him or take pity on his fatherless children. May his descendants be cut off, their names blotted out from the next generation. May the iniquity of his fathers be remembered before the LORD; may the sin of his mother never be blotted out.

And to these words, Stephen added his “Amen.”

My friend, that is not how God wants us to pray for President Biden. That is completely contrary to the directives of the New Testament. And it is a blatant violation of the spirit of Jesus. God forbid we entertain such a prayer for President Biden.

We are not to pray for his death and for his wife to be a widow. And for his children to be despised, homeless, beggars on whom no one has pity. And for his parents’ sins to be remembered. And for future generations of his descendants — which would include his grandchildren — to be cut off and blotted out. God forbid!

It is one thing to be grieved over a sinful agenda and to pray for God to stop that agenda. It is another thing to pray down curses on someone’s children. What on earth happened to our Christian spirit?

Few human beings who lived were more evil than Hitler, but even at the height of his powers, if he had children or grandchildren, I would not be praying down curses on them. Instead, I would pray for his reign of evil to be stopped, for God to rescue the innocent, and for him to repent and face justice.

Sadly, in recent months, the trend has emerged — the latest Christian fad, it appears — to pray down curses on our political enemies. (Check out this call to my radio show for a good example.) This is a fad we must resist.

Paul’s Instructions on Praying for Those in Authority

Look at these clear instructions from Paul as to how we are to pray for those in authority: “I urge, then, first of all, that petitions, prayers, intercession and thanksgiving be made for all people — for kings and all those in authority, that we may live peaceful and quiet lives in all godliness and holiness. This is good, and pleases God our Savior, who wants all people to be saved and to come to a knowledge of the truth” (1 Timothy 2:1-4).

Now, go back and read those words again, realizing that Nero — yes, Nero — was emperor of Rome when Paul wrote to Timothy. That’s how he tells us to pray for a depraved maniac like Nero. Yet some Christians want to pray down curses on Joe Biden’s children and grandchildren? How sick is that?

As for our attitude towards those who oppose us, Jesus said, “You have heard that it was said, ‘Love your neighbor and hate your enemy.’ But I tell you, love your enemies and pray for those who persecute you, that you may be children of your Father in heaven. He causes his sun to rise on the evil and the good, and sends rain on the righteous and the unrighteous” (Matthew 5:43-45).

Jesus Calls to Love Our Enemies

So, in Old Testament times, under the Sinai Covenant, there may have been a time when it was right to pray prayers like Psalm 109 against mortal enemies, who, with their descendants, were bent on doing evil.

But that was then. This is now. And Jesus calls us to something much higher.

The Lord — our Master — commands us to love our enemies, not hate them. And Paul exhorts us to bless those who persecute us rather than cursing them back (see Romans 12:14).

Where we do see evil or unrighteousness or injustice, with God’s help, we should oppose it with all our might. Let us do all we all we can to stand for what is right, both socially and politically. Let us be fearless, tireless, and courageous.

Only let us not be consumed with hatred and carnal anger and vindictiveness in the process. The moment we do, we become part of the problem rather than the solution. Instead, let us have a heart filled with the hope of redemption.

As I have said before, I am eternally grateful to God that people didn’t pray down curses on me when I was a godless, 16-year-old rebel with a heart full of evil. Instead, people prayed for my salvation and transformation.

Let’s do the same for Joe Biden and Kamala Harris. Who knows what God might do in answer to our prayers?