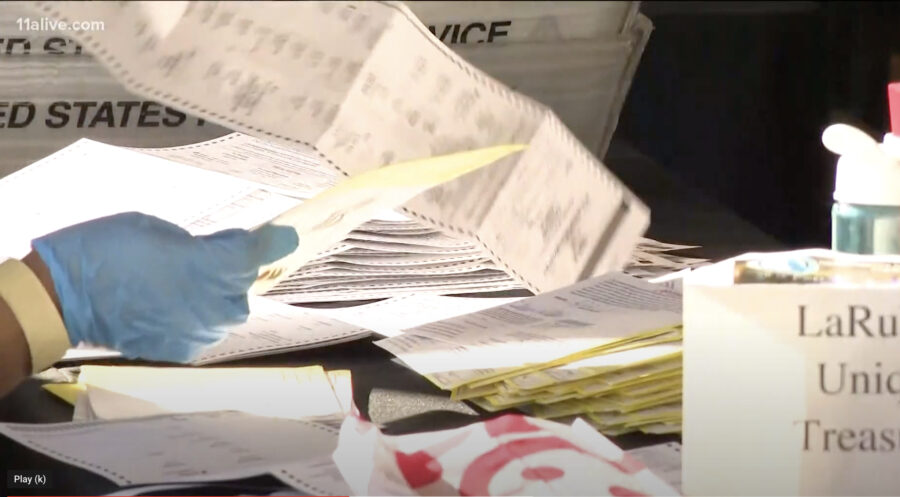 To refresh, Joe Biden is credited with winning the state by less than 12,000 votes.

The examination can’t overturn the official election results. But it can reveal what happened behind the scenes. And help states like Georgia prevent it from happening again.

“What? But Al, I thought Trump and his supporters have lost every single court case involving the election. And the media and RINOs keep saying you’re hurting democracy to go along with the lunatic idea something foul was afoot.”

Well, Superior Court Judge Brian Amero is doing something novel. He’s actually considering the evidence. He said at a hearing in March, “We want to do this in such a way that dispels rumors and disinformation and sheds light.”

Friday’s decision finally puts a light on the 145,000 absentee ballots and Fulton County. So what happened?

In April, Judge Amero ordered Fulton County to turn over digital images of the absentee ballots.

What’s the explanation for the official count being higher? “A high number of ballots appear to have been counted twice,” said a witness for VoterGa.

Perhaps there’s another, innocent explanation. If only there was other evidence of such trickery, say, unusual spikes and weird results in Georgia late on election night and the next day. Oh wait, there was. (For example, at 1:34 a.m., Joe Biden received a dump of 136,155 votes versus only 29,115 for Trump.)

Or these same Fulton County officials lied election day. Like, maybe lying about a big water main break shutting down counting when there was only one leaky toilet in the large State Farm Arena. Oh wait, they did.

Would be even better though, if we had video of people rerunning batches in Fulton County. That’s right, we do. (Or did, before Twitter and YouTube scrubbed it.) Right after county election officials told reporters and GOP observers counting was done for the night. It was a lie. A small group ran ballots until about 1 a.m. … before word got out they were still there. They later denied having given the order. Newly uncovered emails show they lied about that, too.

VoterGA argued Friday that solving the riddle of the 21% discrepancy and determining the truth about fake ballots requires getting a look at the 145,000 physical absentee ballots. Judge Amero agreed. He’s granting the motion.

On May 28, a review will take place, though Fulton County officials will be the ones handling the ballots. Higher resolution images will be taken, which will help forensic experts better determine whether stacks of ballots were mechanically (illegally) marked in advance, as some election workers have testified. There’s also the issue of pristine and unfolded ballots. If you have unfolded “mail-in” ballots you have fraud.

Or the review will find that everything was Georgia peachy.

The Implications Go Beyond the Presidency

You’d think Democrats would celebrate a review that could put questions about Georgia’s results to rest forever. But no. Judge Amero is catching hell for his decision. Darkness is so scared by the light. Why?

It’s not just that proof of fake ballots and ballot rescanning would support Trump’s claims he won Georgia. That “The Big Lie” that the media keeps talking about is, in fact, the Honest Truth. That suddenly other claims about the presidential race would have to be taken more seriously.

The implications go beyond Trump.

Consider this. Assume workers in Fulton County were, indeed, rerunning ballots and stuffing ballots as fake as a Dolly Parton wig. You’ve heard the stories of stacks of ballots with only Joe Biden’s name filled out and the down ballot races left blank. What if they weren’t the only ones re-scanned? What if fake ballots and re-run ballots included down-ballot races?

On November 3, incumbent Senator David Perdue handily beat Democrat Jon Ossoff by nearly 88,000 votes. However, he fell inches shy of the 50% needed to avoid a run-off. He got 49.73% of the “official” vote.

If this May 28 review shows does show the Democratic count in Fulton was inflated 21%, Perdue did get 50% of the legitimate vote in November. Meaning, he won outright, meaning he never should have had to go to a runoff. Meaning, control of the Senate rightfully belong to the Republicans.

A Similar Scenario in Arizona

Not incidentally, this is another reason Democrats, the DOJ, Steele Dossier mastermind Marc Elias, and all their crooked allies are hell bent on destroying the Arizona audit. Don’t want to take the chance a legit count shows Mark Kelly actually lost his race against Martha McSally. Kelly is credited with winning by less than 80,000 votes. It’s a longshot, but if Maricopa County was as corrupt and inept as feared, officials could have swung 80K.

So, if you don’t really mind if Orange Man Bad got robbed, but are aghast at what Congress is jamming down your throat with its red-fisted control of Capitol Hill, perhaps you might want to pay the Georgia review and Arizona audit some attention … and respect.

I’m talking to you, too, Mitch.

Here It Is: Update on Challenges to Maricopa Audit