During divided times, the sacrifices of American troops and their families can help bring us together. 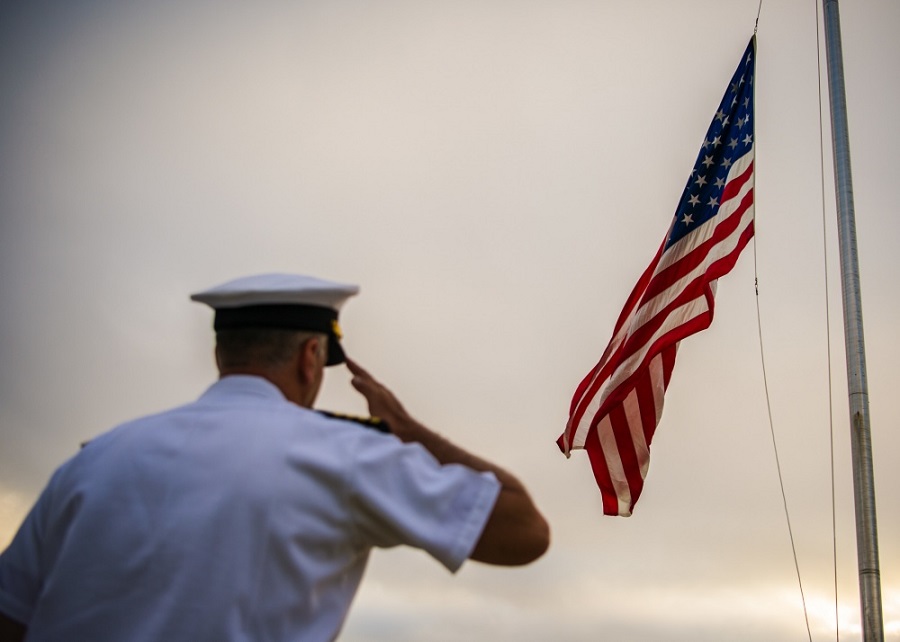 A U.S. Navy sailor salutes the American flag during the annual flag raising ceremony at Naval Station Rota in Cádiz, Spain, on July 1, 2020.

The Fourth of July is about celebrating freedom. As we live through our country’s most turbulent year since 1968, the brave men and women of our military are still serving and sacrificing to defend us all.

While my compass might be off, I believe the vast majority of Americans want something to unite behind this Independence Day. Other than family and faith, there is no greater source of unity than our nation’s extraordinary Armed Forces.

Having spent the past decade meeting, interviewing and writing about our troops and their families, I’m continually amazed by how beautifully this community of heroes represents our country; not just by their selfless actions, but their backgrounds. Whether it’s religion, race, or political beliefs, our nation’s dedicated and diverse service members perfectly illustrate the uniqueness of America.

Like 1968, the U.S. military is currently fighting an overseas war while also dealing with civil unrest at home. To make 2020 even more complicated, the coronavirus pandemic has presented all sorts of new challenges for our country’s courageous men and women in uniform.

How have our troops and their families responded to fighting COVID-19, terrorism and keeping the peace at home all at once? With absolute fearlessness and fortitude.

Photo of the Day: Senior Airman Raelyn Blevins high-fives Sgt. Zell Flamer, both with the @DelawareNG, at a drive-thru testing site for COVID-19. https://t.co/fZ6RyIgfgF #InThisTogether pic.twitter.com/XeJKt424Zq

I was touched by the above National Guard photo of a white female airman recently high-fiving an African-American male National Guard teammate. It speaks to the powerful bond shared by our troops. If they can stay together as one during these trying times, why can’t we?

The accomplishments of our military during this pandemic have been wide-ranging, steady and staggering. Despite great risk to their own safety, tens of thousands of service members have worked side-by-side to run testing sites like the one shown above, distribute food and supplies, secure nursing homes, build temporary hospitals, man call centers, deliver masks, conduct mental health checks and perform countless other acts of kindness. Their constant concern for others sets a poignant example for us all.

For our troops, serving as a beacon of light during this pandemic has come at heavy cost. As of Thursday, more than 12,000 U.S. service members have tested positive for COVID-19. Three U.S. troops have died from coronavirus, along with 35 family members, Department of Defense contractors and Pentagon civilian workers. We mourn their deaths and pray for their loved ones.

Our Military Shows Us We Are All Americans

In Afghanistan and the Middle East, the war against ISIS, al Qaeda and other terrorist groups has continued throughout the coronavirus crisis. Each week, The Stream tells the stories of heroes in harm’s way, including those who have made the ultimate sacrifice. The 16 warriors who have lost their lives so far this year in Afghanistan and Iraq all had families, friends and dreams. They died so we could continue to live in relative peace.

What will we choose to do with that liberty? Fight each other in the streets while the selfless men and women of the National Guard are forced to risk their safety to protect people and property? No matter where one stands on the issues behind the ongoing protests and riots, why should our military be put in such a precarious position while already busy battling terrorism and a deadly disease? As citizens, we can do better than this.

I wasn’t alive on July 4, 1968, but I imagine it was hard to be proud of this country as assassinations, race riots and the Vietnam War tore at our flag’s very fabric. I can only convey how I feel on July 4, 2020, which might surprise you. This Fourth of July weekend, I have never been prouder to be an American.

The reason I feel this way is because I’ve had the privilege of getting to know so many of the valiant men and women who’ve stepped forward to keep us safe, regardless of their backgrounds or beliefs. Even in the worst of times, our military shows us that we are all Americans, bound by liberty and love of country.

Let us pray not only for the health and safety of our country, but the selfless souls who defend it at home and abroad. Please also join me in praying for all military families, who bear a burden every bit as heavy as their uniformed loved ones. In every imaginable way, our military community is the backbone of America.