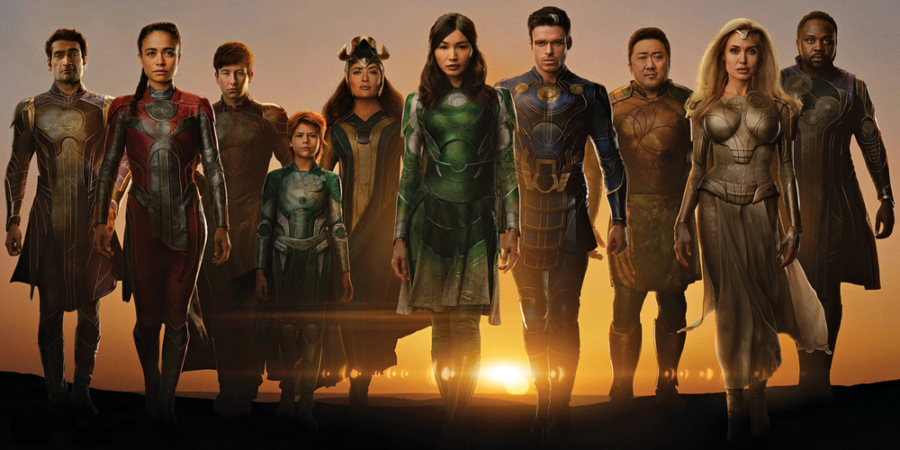 I should have listened to Austin. Right here at The Stream, Austin Roscoe wrote a scathing review of Eternals, which ought to have proved sufficient warning. But he focused on the moral problems of Eternals as a Disney/Marvel movie viewed by children. His complaints on that score were perfectly justified. Austin stayed on topic, so he didn’t spend the time to explain the sheer scale of Eternals’ achievement, the mark that it leaves behind in our culture.

This is not just the worst film I have ever seen. Nor even the worst film ever made. Eternals is the worst movie that ever will be made at any point, even should our species keep making movies for a thousand generations. Which would require that the “Celestial” superhuman monster gestating inside the earth and feeding off our life energy not emerge and shatter the planet. But that gives away the ending.

We Have Hit Bottom

Since the film dares to tell a cosmic story, I’ll hazard its metaphysical status. Eternals is mankind’s low point. Like addicts, we’ve hit bottom. From this nadir, there’s nowhere to go but up, as I’m sure Angelina Jolie’s agent has been reassuring her since she finished shooting this film.

In perhaps the most thankless role I’ve seen any major actress play, Jolie portrays Thena. She’s one of the Eternals sent by an apparently benevolent Celestial at the launch of human history, to protect us. But Thena can’t do her job as warrior goddess, having apparently turned autistic. So Jolie spends much of the movie snarling at her friends and chewing on the scenery, until another Eternal adopts her as a kind of pet and trains her. No, really. He gives her commands and virtually leads her around on a leash. Maybe fire that agent, Angelina.

Why Wasn’t There a Transgender Eternal in a Wheelchair?

The Eternals are a team of superhuman heroes and heroines with awesome cosmic powers. As the story reveals, in fact they are biological robots — machines designed for a purpose. We leads me to ask why the Celestial who sent them down made one of them … deaf? The answer to that becomes clear as we meet all the other Eternals. The deaf one is biracial (that’s a twofer!). Then there are two Asian Eternals, one a gorgeous Chinese Brit and the other a chubby Korean named Gilgamesh.

There are two straight white male Eternals, both sullen and brooding, with (for some reason) Irish accents. Then there’s a Bollywood Eternal; I’m not kidding, he uses his superpowers to … make movies in India. And a runtish, boyish, female Peter Pan-type Eternal. And one who’s both fabulously gay and morbidly obese, packed into a pleather wizard’s suit that makes him look like Stacy Abrams dressed as the Michelin Tire Man.

And that’s the point: It’s a multicultural, sexually diverse team of alien robots that comes down to supervise human history by offering us technological jump starts. And meddle sometimes, as some try to prevent Cortes’s conquest of Mexico. (Preventing the Aztecs’ human sacrifice must have been below their paygrade.) But they also help make the A-bomb, then are shocked, shocked to see that human beings … use it. Not as bright as you’d think trans-dimensional alien robots ought to be. But I’d also have expected them to have the technology for cochlear implants, and I’d be wrong.

Secret Knowledge Teaches Us that Our God Is Wicked

The other point of the movie? That the celestial powers which came down from the heavens to watch over us … were wrong. They don’t serve a higher power that loves mankind and wants the best for it. Instead, they’ve been sent here to breed us as living battery chargers for a vast Celestial Uber-Man with whom Mother Earth is pregnant. And when they wake up to the falsehood of the gospel they’d been taught, their heroic action is … stay with me here … to reject their god’s commands, and abort it.

That’s right, to save Mother Earth and the human race, they must strangle her monster child in the birth canal. The last 40 minutes of this aptly named, interminable catastrophe shows the Eternals scurrying around trying to perform a partial birth abortion of a superhuman Celestial. Because Mother Earth has rights, you know, and one of them is Choice. She has a career to manage, and lots of other children, in the forms of human beings — whom the Eternals keep insisting (without offering any evidence) are wonderful, loving, and gorgeous. It’s all part of the sweet mystery of life, as Justice Kennedy used to say.

A Gorgeous Mosaic of Woke Idiocy

Is this then a pro-abortion epic? An ode to human exceptionalism? An incoherent mishmash of post-modern politics and incompetent story-telling? It’s each of those things and more. How many films today feature:

Jumping the Shark Like Tonya Harding at the Olympics

It took just ten minutes for Eternals to jump the shark so flamboyantly that my girlfriend and I began to enjoy it. At each moment of Woke spiritual uplift we’d cackle. With each of Angelina’s spastic attacks, we’d trade snark about her career. Soon we were actively hoping for the movie to get even worse, and we were not disappointed.

Sure, at the back of my head gnawed my inner Culture Critic, who warned me that the film might represent the deeply held beliefs of half my fellow citizens. And yes, at one point I leaned over and said (in my outside voice, I was way past whispering), “I feel … humiliated watching this.”

But I got past that. If you must spend almost three hours of time you’ll never get back and will have to answer for someday before God’s throne of judgment … watching Eternals, you should do so in the proper spirit. Bring with you the scorn that arises when you read the fables of the third-century Gnostics, whom the early Church fathers mocked heartily. I remember chortling through “The Hypostases of the Archons” for Jaroslav Pelikan’s church history class. Those cosmogonies too featured wicked gods, proliferating spirits battling in the sky, and the need for those heavenly spirits to “awake” to secret knowledge that saves us.

Modern Gnostic fables like Eternals appeal insidiously to modern people who’ve been trained, like lab rats, in school to reject any notion of God’s design in nature. Darwinist materialism has poisoned their souls against trusting a Creator, or imagining a cosmic order friendly to mankind. “Celestials,” if they exist, are indifferent or hostile to us. We evolved on this planet by chance, and the governing principle of life is the ruthless struggle to survive. Happy talk about love and compassion are just lipstick on that pig.

All these bleak fables based on pseudo-science bring us back to Psalm 95: “The gods of the gentiles are demons.”