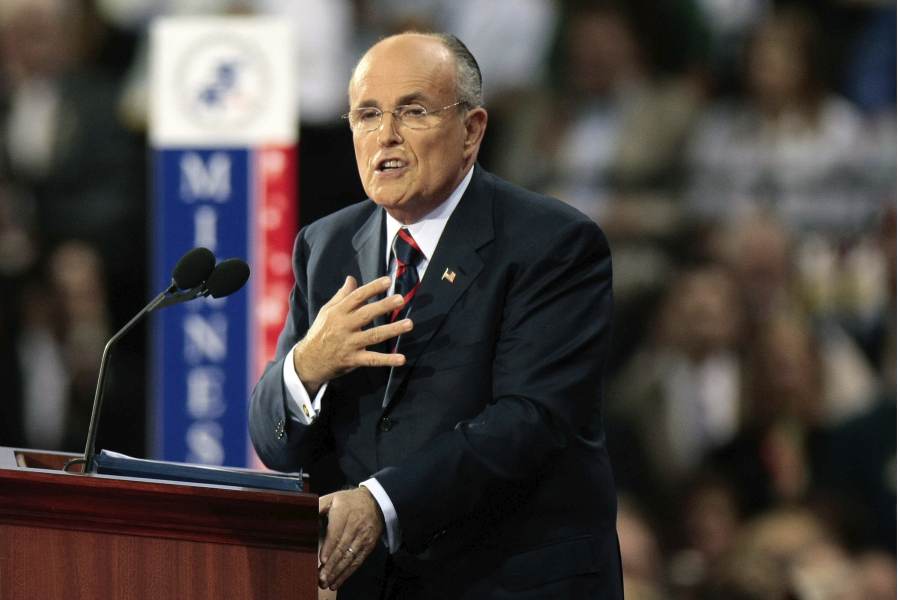 Later that day, it was reported that he’d been admitted to Georgetown University Hospital for treatment.

Rudy has been doing a heroic job managing the legal strategy for Trump in states where election tactics and results have been highly suspect. Like all who test positive, he’ll be under quarantine for 14 days after being symptom-free, so must continue his role either from the hospital or his home, as the case may be. I hope you’ll keep him in your prayers.

He appeared fine in his interview with Bartiromo, who asked for his response to dismissals from the media such as The Wall Street Journal‘s Sunday morning headline “Trump Uses Rally for Georgia’s Senate Candidates to Push Unsupported Claims of Voting Fraud.” (I join in her scorn of the WSJ’s unsupported use of the word “unsupported.”) Rudy could only shake his head in bewilderment at that headline as Maria played footage from the State Farm Arena in Fulton County, where a skeleton crew of unsupervised ballot-counters appeared to be stuffing the Dominion machines.

“Why is it that the media continues to report that there’s unsupported evidence here,” she asked, “when every day, you’re out talking about these situations?”

(It should be noted that the chief investigator for the Georgia Secretary of State told the factchecking site LeadStories.com that the video shows nothing unusual: that the workers who left were just “cutters” whose job is open the envelopes and they were finished, and that those weren’t suitcases but standard containers for ballots. She also claims nobody was told to leave and the people on the tape were just scanners doing their job. Duly noted.)

However, Guiliani went on to say there are ONE THOUSAND affidavits from people who personally observed fraudulent acts. “This is a massive fraud, all throughout the country,” he said.

He’s looking to state legislatures to act; Bartiromo asked about the possible role of the Supreme Court. (Justice Sam Alito’s involvement in Pennsylvania has seemed to us to be a positive sign that SCOTUS might hear a case.) Giuliani said the Pennsylvania case “probably is a week away” from being ready to argue, and he believes it is “a very good case.”

He told Maria that state legislatures have authority to change state electors if this action is based on “substantial reasons of corruption, irregularities — in each case, each one of these legislatures has more than enough of that to sustain a Supreme Court challenge.”

“We’re getting heard in the state legislatures,” he said, “and once they make a decision, we’ll get heard in the Supreme Court.”

“We’re not getting heard in the public,” he added, “except for occasional shows like yours and a few others, a few interviews that we do, and social media.” (I would add that social media has actually made the sharing of information quite challenging, and also that we proudly place ourselves within the small circle of outlets trying to inform people.)

Giuliani said the FBI had not questioned the people who were shown working unsupervised at State Farm Arena. “Not that I know of,” he said. And it wasn’t just the counting, he alleged. “They were involved in two or three other acts of voter fraud.”

“And the FBI is nowhere to be found.”

John Ratcliffe, Director of National Intelligence, has expressed similar concerns and calls for more transparency from the FBI.

Dershowitz and the Supreme Court

Alan Dershowitz, appearing later in the show, agreed that there is “probable cause” for further investigation. He said Giuliani has made “very serious allegations.” The big question is which institution is designed, constitutionally, to look into these allegations: state legislatures? the courts? Dershowitz proposes the creation of a “vote integrity panel” or “VIP,” consisting of former justices and judges, “neutral and nonpartisan,” that would look at all election-related complaints before, during and after the vote.

Not to shoot down an idea, but I do see potential problems, starting with the name “VIP, Voter Integrity Panel.” There already exists a group called “VIP,” the Voter Integrity Project, sponsored by the Thomas More Society; we’ve quoted from it here. Still, that’s a relatively small problem compared with the most challenging one: keeping such a panel truly nonpartisan. But at least someone’s thinking about possible solutions going forward.

Dershowitz agreed that Giuliani has been presenting evidence — repeat, for The Wall Street Journal, EVIDENCE — that now should be subject to cross-examination and other testimony.

He said Justice Alito’s actions suggest that the Supreme Court would likely rule Pennsylvania acted unconstitutionally in expanding the “window” so that ballots arriving after Election Day were counted.

(Since I’m not a legal expert, here is a different take on the possible reasons for Alito’s timing of his deadline.)

Dershowitz predicted that if the SCOTUS decided to take the case, it would rule that Pennsylvania acted illegally in changing voting laws without legislative action. This would cancel out all votes in Pennsylvania that were received after the close of Election Day.

The Disaster of Mass Mail-In Voting

One thing we know: we’ve got to abolish or severely limit mail-in voting. There were 100 million mail-in ballots in this election! Ken Starr reminds us that in the year 2000, Jimmy Carter and James Baker’s bipartisan commission warned of the huge potential for fraud posed by mail-in voting. In 2008, even Barack Obama agreed that mail-in ballots shouldn’t be counted unless they had verified signatures.

But in Starr’s words, “we’re running out of time” with this election because December 14 is the date set for the Electoral College to meet. “It’s going to take extraordinary action by legislatures and so forth.”

On the other hand, there may be more time than that, as the Constitution itself sets just one date, and that is Inauguration Day, January 20. Some legal analysts say the rest of the timetable isn’t necessarily firm .

Starr points to the allegations of especially egregious potential fraud in Georgia, and in Wisconsin with the use of unmanned dropboxes in violation of state law. We recently reported these were funded by the Center for Tech and Civic Life, meaning Mark Zuckerberg.

Again, we’ll be praying for Rudy Giuliani to stay healthy and active. At the same time, we know the election challenges are in excellent hands with lead GOP attorney Jenna Ellis. On a related note, we also share Michael Flynn’s hopes for the independent legal efforts of Sidney Powell, whom he calls “America’s guardian angel of justice.”

Addendum: Speaking of Sidney Powell, we’re eager to see the case she makes against Dominion Voting Systems and how it plays out. In the meantime, we don’t quite know what to make of this announcement Friday that involves Smartmatic, the firm that makes software used in Dominion machines, but we think you might be very interested. No accusations yet, just eyebrows raised at more evidence of the George Soros connection.