Election Update: All Eyes on President Trump and Walter Reed

Trump released a video Saturday night updating the nation on how he feels ... and insisting he won't stop working. 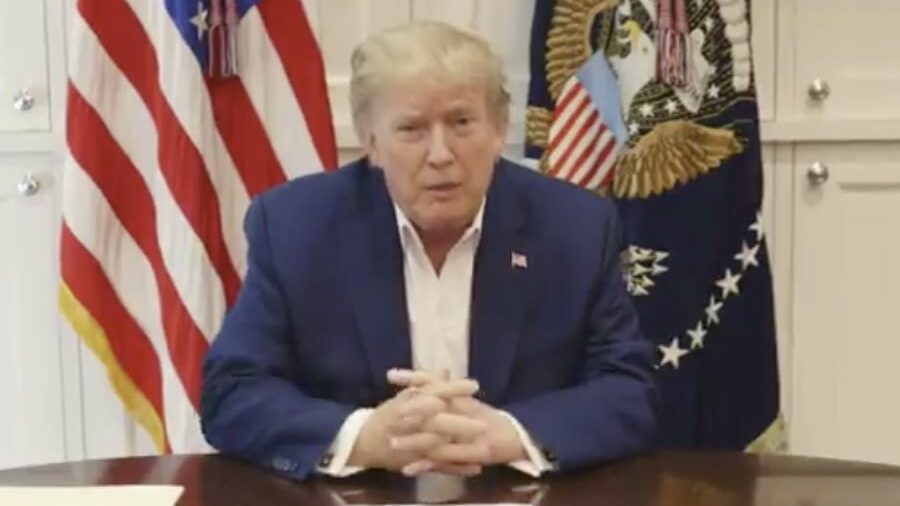 As Election Day speeds closer, all eyes are on Walter Reed, where the president remains hospitalized after being diagnosed with COVID-19.

Daughter-in-law Lara Trump will be hosting a national Call to Prayer at 5:00 pm Eastern on Facebook. (Details below)

Friday offered a scare, Chief of Staff Mark Meadows admitted, when the president’s oxygen levels dropped and he reportedly suffered heart palpitations. However, as the sun rose Sunday morning, his doctors report Trump is responding “very well” to treatment, is making “substantial progress” and has no fever.

According to OANN sources, the biggest problem is getting the guy to keep still for more than 20 minutes.

President Trump admitted as much in a taped message released Saturday evening. Trump said he was “feeling much better now.” He said he was given the option of staying at the White House residence and not working, “and just be done with it.”

Even though he was using his “inside voice,” and acknowledged the next couple days are crucial, the President sounded strong and sharp. And determined.

He spoke of the new therapeutics and vaccines. “We have things happening that look like they’re miracles coming down from God.”

The President thanked Americans and those around the world for their support. “I’ll never forget it,” he said.

Who but Trump would wear a business jacket and pressed shirt while recovering at a hospital from a potentially fatal disease?

Out of respect (and frankly because negative ads would backfire), Joe Biden said he pulled his negative campaign ads. However, hundreds were still running as of Saturday. The Biden campaign said it takes about a day for all ads to be removed.

Rep. Ilhan Omar blasted Biden’s decision. “Why would Biden delay or suspend his campaign when we know Trump would’ve had ads up by noon today ridiculing Biden for testing positive? Get it together,” she tweeted.

This is the same Rep. Omar who Project Veritas has exposed as running a fraudulent vote harvesting operation in the swing state of Minnesota. Anything to win, baby.

Democratic Sen. Chris Murphy decided the president’s illness was the perfect time to resurrect the dead and buried Russia hoax. He suggested Trump would be replaced on the campaign trail by “surrogate” Vladimir Putin.

Saturday Night Live displayed its typical lack of class and rabid TDS by mocking the President’s illness … and lying about Trump saying COVID was a “hoax” in the process.

Meanwhile, Twitter claims it’s going to take down the tweets from those hoping for the President’s death, but so far we’re not seeing much of that.

An Antifa girl showed up to Walter Reed and is chanting “Wah wah your leader’s gonna die” from across the street pic.twitter.com/6Z3Vq66xLz

Though not saying the same out loud, the wretched hosts on CNN can’t seem to remove the smug and gleeful smirks off their face.

That said, let’s give a shout-out to MSNBC’s notoriously anti-Trump Rachel Maddow. Maddow tweeted “God bless the President and first lady. If you pray, please pray for their speedy and complete recovery — and for everyone infected, everywhere.”

God bless the president and the first lady. If you pray, please pray for their speedy and complete recovery — and for everyone infected, everywhere.

This virus is horrific and merciless — no one would wish its wrath on anyone.

We must get its spread under control. Enough.

How Will President Trump’s COVID Diagnosis Affect the Campaign?

So how does the President’s COVID diagnosis affect the campaign? The conventional wisdom is that it hurts him. This puts COVID front and center of the campaign, and frankly, that’s all Joe Biden’s got. COVID and Trump’s COVID response is his one big issue. Biden gets to second-guess Trump from here to November 3, as he has been doing since being handed the Democratic nomination.

Also, this means Trump is unable to run around the country for a few crucial weeks, building up enthusiasm, helping out local House candidates.

Third, being ill takes away, for the moment, one of Trump’s advantages: Joe Biden being frail, forgetful and failing.

Fourth, since the focus is all on Trump right now, Biden can continue his gaffes and blank outs and stumbles without anyone paying attention.

However, there is the possibility Trump comes out of this with massive momentum. Support for Ronald Reagan skyrocketed after he was shot in an assassination attempt. His humor and grace during the experience generated renewed appreciation for The Gipper.

In Trump’s case, his fight against COVID could generate renewed appreciation for his fighting spirit. The guy does not stop. No matter what is thrown at him, he does not quit.

Also, if he is wise, he will use this tremendous opportunity to show off his more human and humorous side.

95% of Trump’s media coverage has been negative. Despite all his accomplishments. If for just a few days, Trump gets to be seen as a human being, rather than Orange Man Bad, and he makes the most of those days, he could come out of isolation with a boost. After all, America is with Trump on policy. It’s his personality (as presented by the 95% negative coverage) that turns many off.

Finally, as Jesse Waters noted Saturday night, if Trump is able to come roaring back the last couple weeks of the campaign, he becomes a living, breathing symbol of America roaring back from COVID. And that momentum will carry him to victory.

Prayer for The President

Meanwhile, prayers for the President continue. Tonight at 5 pm eastern, a national prayer vigil will be held on Facebook. The event will be hosted by Trump’s daughter-in-law Lara Trump.

You can join in the prayer event here: Call to Prayer