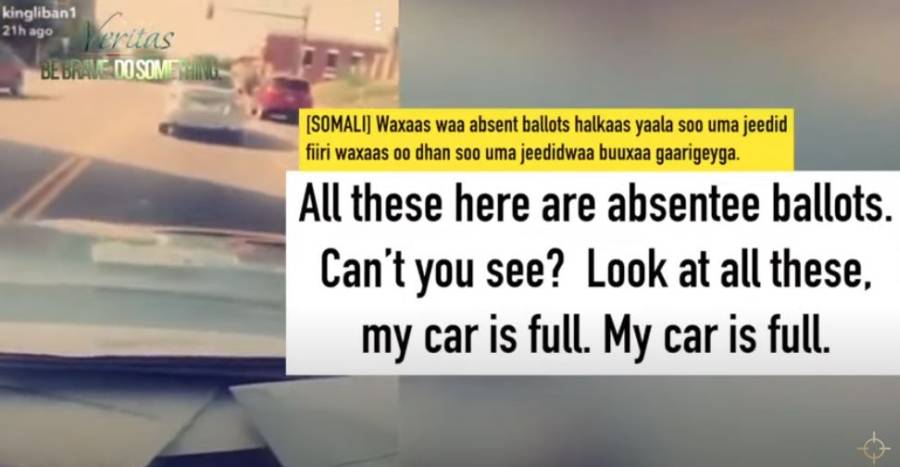 A still from a video posted by "ballot broker" Liban Mohamed, bragging about the number of election ballots he had gotten hold of in one day. Project Veritas on Sunday exposed the voter fraud operation their sources say is run by Rep. Ilhan Omar's Minneapolis "machine."

You hear a lot of folks say voting fraud is a myth. Like Big Foot. Unicorns. The Tooth Fairy. Just something Republicans harp on as a way to suppress the vote. Or, more ominously, for Donald Trump to remain in power even after an election defeat.

On Sunday evening, Project Veritas released footage demonstrating a massive voting fraud operation in Minneapolis run by associates of Squad Member Rep. Ilhan Omar. This includes video of one of the perpetrators —in a video he himself posted — boasting of his crime. “All these here are absentee ballots,” ballot broker Liban Mohamed says, flipping through stacks spread in his car. “Look at these, my car is full. My car is full.”

The 16-minute exposé also includes undercover video of a ballot harvester explaining the reach of the operation, how voters are shaken down for their ballots and ordered to vote a certain way.

We are shown high rise towers filled with elderly. Every single ballot in those buildings is collected, we’re told, with the vote going the way the collectors want. A voter explains, “When we sign the voting document and they fill it out is when they give us the money.” In this racket, cash talks.

“Money is everything,” ballot broker Mohamed says. “And a campaign is managed by money.”

Who manages the campaign of voter fraud? According to O’Keefe’s sources: the campaign manager for Rep. Ilhan Omar.

Here is the devastating video. Please watch and share.

Project Veritas founder James O’Keefe is focusing on “ballot harvesting,” where third parties collect mail-in ballots and deliver them to election officials. This is the first of what he promises will be a series of reports.

Minnesota law prohibits anyone from harvesting more than three ballots in an election. The ballot broker in the Project Veritas video boasts of having 300 right at that moment. “We got 300 (votes) today for (candidate) Jamal Osman only,” he brags. Osman won a seat on the Minneapolis City Council this past August.

This is no surprise to Omar Jamal, a Somali American, working for the Ramsey County Sheriff’s office. He also runs the corruption-fighting Somali Watchdog group and helped Project Veritas with its investigation.“It’s an open secret. She [Omar] will do anything that she can do to get elected and she has hundreds of people on the streets doing that.”

Jamal spoke to a ballot harvester who explained how Somali-American vote-buying operatives from the Omar machine came to his apartment building. Omar’s operatives requested the ballots and filled them out for voters. “They came to our homes. They said, ‘This year, you will vote for Ilhan . . . We will make the absentee ballots.’”

And don’t think about going to a polling place yourself. Omar’s operatives told him, “You stay home and you will not go to the place.”

The former political worker Project Veritas spoke to explained how sophisticated and widespread Gainey’s operation is. He is “managing the voting place,” she claims. “They’re accepting temporary addresses; they’re accepting all kinds of shenanigans.”

People that are showing their ID: ‘I moved 30 days ago, my ID’s not come back.’ ‘OK, just give us the last four of your social and tell us the address,’ and then somebody else will say ‘Yeah.’ They will send people who are helping them vote and saying: ‘Yeah, I can vouch for this madness.’

As with all the many scandals surrounding Omar, her people feign innocence. Jeremy Slevin, Senior Communications Director for Omar, told Newsweek: “The amount of truth to this story is equal to the amount Donald Trump paid in taxes of ten out of the last fifteen years: zero. And amplifying a coordinated right-wing campaign to delegitimize a free and fair election this fall undermines our democracy.”

Fair? You might want to talk to some of Jamal Osman’s opponents. A political operative for Minnesota’s Democratic-Farmer-Labor Party, a man also named Jamal, told Project Veritas’s undercover journalist he was afraid to speak up about the abuses he saw. “They fight you if you speak up,” Jamal said. “Like what? Like what can I do? Like get jumped? H***, no.”

Corruption That Could Collapse a Country

Hennepin County Attorney Jeff Wojciechowski told Project Veritas the ballot harvesting conduct described to him was “illegal and we will be investigating.”

But will anything happen? We’ll see.

Meanwhile, YouTube is trying to thwart the power of the video. Underneath the video the tech giant’s placed a statement: “Mail-in ballots that meet eligibility and validity requirements are counted in every election. The law requires all valid votes to be counted in every election regardless of how they are cast.” They obviously didn’t watch the video. The key word is “valid” and O’Keefe lists several of the state and federal laws broken just by activities described and confessed to in the video.

Minnesota is a swing state. In 2016, Hillary Clinton beat Donald Trump by less than 45,000 votes. This time out, countless thousands of fraudulent votes could swing the election in a state that could swing the election. Project Veritas’ bombshell revelations should be massive news. CNN.com at this hour still has nothing on it. Neither does MSNBC. Nothing on one of the most famous members of the House being implicated in a massive voter fraud operation that could throw the election.

Investigator Omar Jamal says the danger to our nation is very real.

“If American people don’t pay attention to what’s happening, soon the country will collapse. The rules and regulations, if you ignore that, and you let corruption and fraud become a daily business, then tough luck. The country will not exist as they know it.”

Perhaps this is what Rep. Ilhan Omar means when she says she wants to “dismantle” our system.