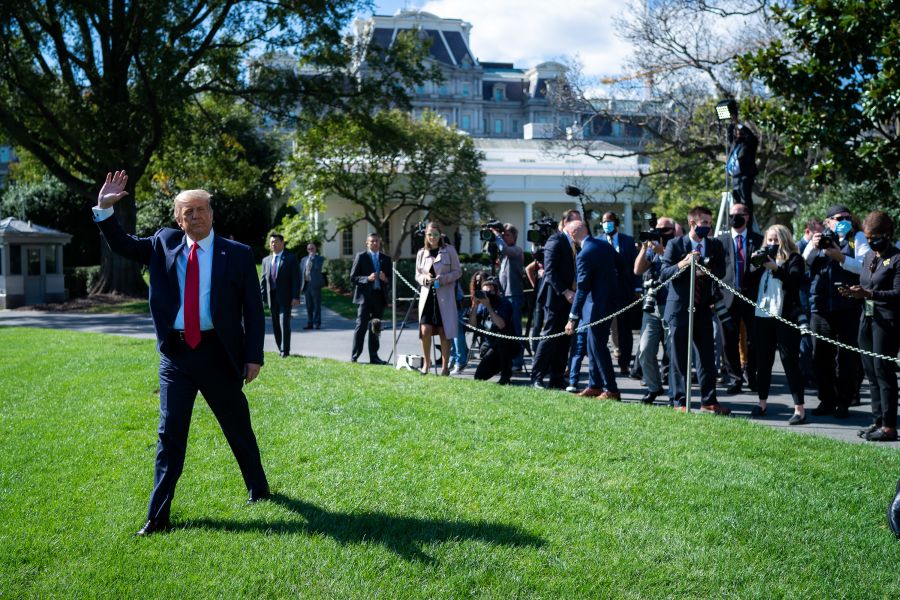 President Donald J. Trump waves as he walks across the South Lawn of the White House Wednesday, Sept. 30, 2020, to board Marine One en route to Joint Base Andrews, Md. to begin his trip to Minnesota. President Trump was diagnosed with COVID-19 one day later.

“Content that wishes, hopes or expresses a desire for death, serious bodily harm or fatal disease against an individual is against our rules,” Twitter told Motherboard, which is part of Vice Media. The company added that the months-old rule applies to posts about the president, and Tweets that violate the policy will be removed.

The social media platform also added that not all tweets that appear to engage in the prohibited behavior will be targeted.

“[We] won’t take enforcement action on every Tweet,” Twitter told Motherboard. “We’re prioritizing the removal of content when it has a clear call to action that could potentially cause real-world harm.”

Zara Rahim, who identifies herself as a previous staffer for former President Barack Obama and former Secretary of State Hillary Clinton, wrote “I hope he dies” in reference to Trump in a now-deleted tweet.

She tried to delete her horrible tweet but @ZaraRahim is a communications person so she knows, the internet is forever. After finding out Trump had coronavirus, the former Obama WH staffer and Clinton National Spokeswoman tweeted "I hope he dies". pic.twitter.com/ZQ9cRjb7P7

Cody Johnson, a podcast host and nearly 180,000 followers, tweeted that he thinks Trump’s diagnosis is “funny” and those that agree with him should tell others that they “hope the president dies from the virus.”

Johnson’s tweet was still live as of Saturday afternoon.

If someone tries to scold you for thinking this is funny, simply tell them that you hope the president dies from the virus.

Meanwhile, others, including left-wing figures, have wished the president well during his sickness.

“God bless the president and the first lady,” MSNBC’s Rachel Maddow tweeted Friday. “If you pray, please pray for their speedy and complete recovery — and for everyone infected, everywhere.”

“This virus is horrific and merciless — no one would wish its wrath on anyone,” she continued. “We must get its spread under control. Enough.”

God bless the president and the first lady. If you pray, please pray for their speedy and complete recovery — and for everyone infected, everywhere.

This virus is horrific and merciless — no one would wish its wrath on anyone.

We must get its spread under control. Enough.

Obviously, we’re in the midst of a big political battle right now, and while there’s a lot at stake, let’s remember that we’re all Americans. We’re all human beings. And we want everyone to be healthy, no matter our party.