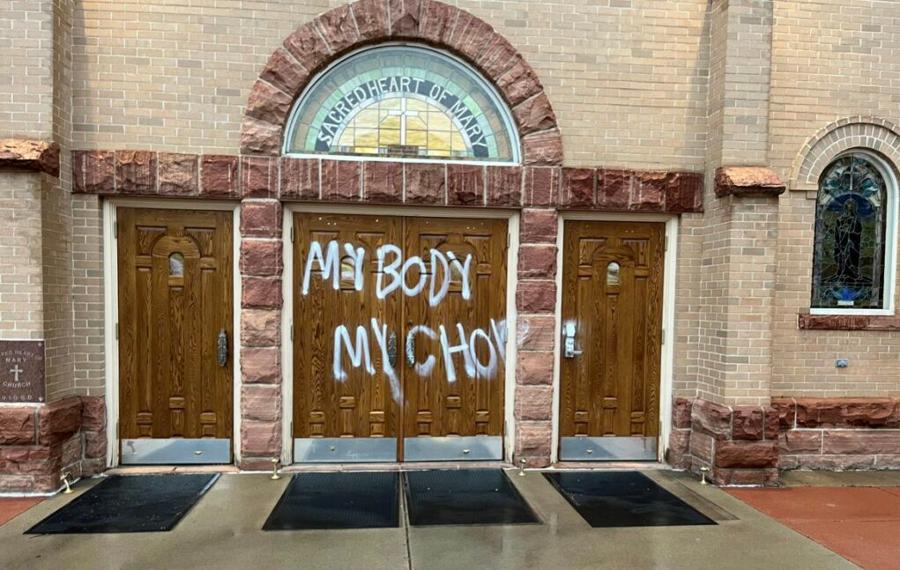 The Sacred Heart of Mary parish in Boulder, Colo., was vandalized with graffiti messages on May 4, 2022. Many other churches and pro-life pregnancy centers have seen vandalism in the wake of Roe v. Wade being overturned.

Since the fraudulent, dishonest precedents of Roe v. Wade and Planned Parenthood v. Casey were miraculously overturned, we’ve seen a wave of violence. So far, groups such as Jane’s Revenge have only damaged property. But a very real assassination attempt was made against Justice Brett Kavanaugh, who was later hounded out of a public restaurant — to the White House’s approval. “That’s democracy,” the president’s press secretary said.

We’ve seen churches burned and desecrated, along with pro-life pregnancy centers — the sites where countless women’s suffering has been ministered to non-violently. And their babies have been welcomed. Vicious, threatening messages remain on some of those buildings, along the general lines of “If My Choice Isn’t Safe, Neither Are You.”

The Justice Department won’t act on what is clearly a national conspiracy to commit acts of terrorism, remaining as do-nothing as Democratic presidents used to be about lynchings in the Jim Crow South.

What God Does with the Marks of Persecution

Since the early Church, Christians have found it spiritually helpful to meditate on Jesus’ sufferings. An early icon in the Eastern church was called “not-made-by-human-hands,” because it was (tradition suggests) in fact the veil that Veronica pressed against Our Lord’s face on His way to Golgotha. The Shroud of Turin, with its mysteriously created image of a crucified man, still haunts believers.

Catholic Passion Plays, Lutheran cantatas such as Bach’s St. Matthew Passion, and countless Methodist church hymns memorialize Christ’s world-redeeming anguish. The Passion of the Christ was one of the most successful Christian films ever made.

Why Did the Risen Jesus Still Bear Wounds?

All that brings us back to a theological question. Why did Jesus still bear the marks of His Passion after Easter? In part, perhaps, to establish His true identity to apostles such as Thomas. But God obviously had more in mind than that. God clearly wants us to remember that sin has a price, and that only His Son was willing and able to pay it.

The Church has traditionally made even more of this mystery than that. Depictions of martyrs since the early Church included the signs and even depictions of their suffering. They carry with them in glory the stripes they earned for Christ. Liturgical churches celebrate their feast days not on their earthly birthdays, but on the days they died.

No doubt Church leaders who approved such practices were thinking of St. Paul’s famous lines:

But whatever anyone dares to boast of — I am speaking as a fool — I also dare to boast of that. Are they Hebrews? So am I. Are they Israelites? So am I. Are they descendants of Abraham? So am I. Are they servants of Christ? I am a better one — I am talking like a madman — with far greater labors, far more imprisonments, with countless beatings, and often near death. Five times I have received at the hands of the Jews the forty lashes less one. Three times I have been beaten with rods; once I was stoned. Three times I have been shipwrecked; a night and a day I have been adrift at sea; on frequent journeys, in danger from rivers, danger from robbers, danger from my own people, danger from Gentiles, danger in the city, danger in the wilderness, danger at sea, danger from false brethren; in toil and hardship, through many a sleepless night, in hunger and thirst, often without food, in cold and exposure. And, apart from other things, there is the daily pressure upon me of my anxiety for all the churches. Who is weak, and I am not weak? Who is made to fall, and I am not indignant?

First, Stem the Tide of Violence

With this in mind, let’s consider the question posed above. What to do about pro-abortion violence? Clearly we need to try to stop it where possible. We must demand that the State act, and where it will not, provide private security. Passivity in the face of symbolic violence would only enable and encourage lethal violence.

But we won’t always succeed. The demons still present during this our national exorcism will see to that. There will be churches defaced, and pregnancy centers marked with violent messages, despite our very best efforts. More men will show up with machetes. What is the wisest, most politic, most Christian response?

Leave Pro-Abort Crimes for All to See

We suggest that it is to leave the marks of the violence visible, where possible. Restore any structural damage, make sure there’s no risk to people. But where there’s simply obnoxious, hateful graffiti, for instance … perhaps we should leave it in place. At least for a while.

We ought to consider such insults, such blows and spitting, as our participation (however slight) in the sufferings of Jesus. We ought with St. Paul to “boast” of them. Our churches stand with the vulnerable, the crucified, the scapegoats. That’s why they suffer violence. Nothing will happen to the sold-out chapels of Caesar, Mammon, and Sodom that hang the rainbow flag. That symbol’s as good as blood over the doorpost, to tell the angels of death not to trouble that house. An infernal Passover, for a church that’s already dead.

Furthermore, politically, we ought not to be cleaning up the crime scene on behalf of violent extremists. If they’re so committed to killing children for sexual convenience (or eugenics, or simply for cash), why should we pick up their droppings? Let people see who are the violent actors who don’t really care about women — or else they wouldn’t be trashing places that offer them compassion, free medical care, baby shoes, and diapers.

The Bullet Holes from Pearl Harbor

Even secular institutions have seen the wisdom in such a strategy. The U.S. Army never filled in the bullet holes at Pearl Harbor, left over from the 1941 attack. Instead, they highlight these wounds which the cause of freedom suffered, in much the way that we venerate the holy wounds of Christ.

Since unborn babies are the new scapegoats, perhaps we need to keep the malice of their enemies before America’s eyes.