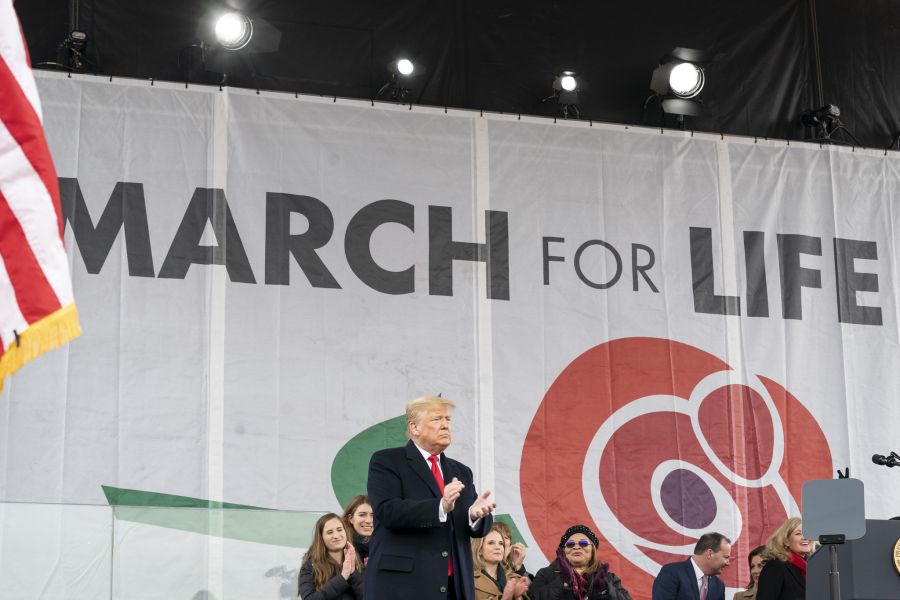 Since I lost a daughter to a forced abortion as a teenager, my life has had a single focus. That is, protecting the most vulnerable. The loss of my daughter birthed in me a desire to live a life in solidarity with those whom society or the government targets, neglects, or forgets.

And that’s why this fall I’m voting to re-elect President Donald Trump.

Which Son Did His Father’s Will?

I know that saying this will anger or sadden some friends of mine. Before I make my case on the merits, let me try to help them disarm their instantaneous emotional reactions. My friends, I ask you sincerely to read the following passage. Read it slowly and prayerfully, as Scripture should be read. Ask for the Spirit’s guidance in fully understanding it. The speaker is Jesus.

What do you think? A man had two sons; and he went to the first and said, ‘Son, go and work in the vineyard today.’  And he answered, ‘I will not’; but afterward he repented and went. And he went to the second and said the same; and he answered, ‘I go, sir,’ but did not go. Which of the two did the will of his father?” They said, “The first.” Jesus said to them, “Truly, I say to you, the tax collectors and the harlots go into the kingdom of God before you. For John came to you in the way of righteousness, and you did not believe him, but the tax collectors and the harlots believed him; and even when you saw it, you did not afterward repent and believe him. (Matt. 21: 28-32)

It’s true that Jesus meant this parable for something specific. He referred to the “righteous,” religious leaders who rejected Him, compared to the sinners who were humble enough to follow Him. But Jesus’ words always have much wider application to life as a whole. He made the world, and the human race, and spoke for the millennia — well aware that someday those words would end up as scripture.

How might we apply this passage to our world today? Well Our Lord Himself said that whatsoever we do to the least of our brethren, we do unto Him. That in fact at the end of our lives, and of the world, that’s the exact criterion by which He will judge our souls. So to understand this parable, we ought to plug in for “work in the vineyard” our own work on behalf of the least of our brothers and sisters. Does that sound fair to you? And insofar as our Christian, pro-life principles should infuse how we vote, we ought to judge candidates for every public office by this standard as well.

Does that public official obey our Father’s command to serve the most vulnerable? How does he treat the powerless, as opposed to the powerful? How much does he simply “yes” us to death with empty promises to get working on that vineyard, sooner or later? Or instead, hunker down and get himself dirty, tending the vines? And how much do we ourselves settle for rhetoric and virtue-signaling, instead of concrete results?

Kamala Harris, as California Attorney General, took campaign money from Planned Parenthood. Then she tried to imprison the pro-life journalists who exposed how that group sells baby parts.

I’m going to go group by group through those whom I see as the most vulnerable people on earth, the least among us. For each, I’ll compare the track records or platforms of Trump and Biden.

Preborn children are surely by any standard the most vulnerable people on earth. Not only are they tiny, silent, and voiceless. In much of the world, and here at home, they are rights-less. They legally have no standing. They don’t even get the same protection from cruelty as farm animals raised for slaughter.

The Trump administration both here and abroad has sought to increase protection for unborn children. The president tried to defund Planned Parenthood, and pare back as much as he could the brutal implications of Roe v. Wade. He faced a hostile or do-nothing Congress, of course. Not all the vines lived. But he tried and will go on trying — witness the almost fanatical opposition he faces from the abortion industry.

Joe Biden, by contrast, has flip-flopped on even the Hyde Amendment, which once he backed. He now favors legal abortion right up through birth, and promoting legal abortion in countries where it’s still banned. Kamala Harris, as California Attorney General, took campaign money from Planned Parenthood. Then she tried to imprison the pro-life journalists (friends of mine) who exposed how that group sells baby parts in Styrofoam coolers for profit.

Around the world millions of people face violence, bias, and legal discrimination because of their faith or their ethnicity, or both. Just the most well-known instances are:

On each of these cases, the Trump administration has applied pressure and tried to take action. Ambassador Sam Brownback and Secretary Mike Pompeo have used American “soft power” and the bully pulpit to raise awareness of these human rights outrages.

What has Joe Biden done? He has soft-pedaled any criticism of tyrannical regimes, out of deference to governments where his family has major business interests. Or regimes he wants to make political deals with. He supports forcing Catholic nuns who serve the elderly to close their doors if they won’t dispense abortion pills.

For decades, factories and agribusinesses have exploited illegal immigrants. Big corporations have lobbied to keep our borders porous and lawless. Meanwhile, control over who comes and goes into our country has fallen in the hands of narcotics cartels, who now specialize in human trafficking, especially to the sex industry. Donald Trump, despite bitter obstruction, has moved to extend the rule of law to our chaotic, dangerous borders.

Joe Biden, by contrast, has promised to essentially cease any efforts to enforce our country’s democratically enacted immigration laws. That’s the best news imaginable to the coyotes who trade women and children as commodities, leaving behind them “rape trees” and the bodies of those who die in the desert.

Despite all the dire warnings by GOP elites invested in reckless nation-building (or breaking), Donald Trump has not embarked on aggressive wars. The brutal reign of ISIS over Syria and Iraq, which the Obama administration enabled, has come to an end. Trump managed that with minimal loss of U.S. life, by supporting local Kurdish and Christian freedom-fighters. He ought to support their efforts at “self-administration,” now threatened by Turkey and al Qaeda.

Biden, by contrast, fully backed Obama’s “junior varsity” view of ISIS. He fiddled, while Iraq burned. He backed the Obama plan that destroyed the nation of Libya, returning it to premodern chaos, and permitting the sale of black slaves to Arab masters, now rife in that country. Almost half of Libya is now controlled by Islamists linked to ISIS.

As I’ve documented here the economic lockdowns imposed supposedly to stop the Coronavirus are causing famines. Combined with historic locust plagues, the slow-down or shut-off of U.S. food exports threatens to starve whole nations in Africa and Asia. The Trump administration has acted aggressively to avert this looming catastrophe, that threatens hundreds of millions with hunger — and could spark regional wars.

Biden and his party, by contrast, have offered no plan, and barely bothered to mention the impact of the virus lockdown on poor, foreign brown people. Their view of the virus has been a spectacular instance of national narcissism.

Which Brother Are You?

Now, there’s plenty in Trump’s rhetoric and personal past to distract us from this. Just so, there was much that the Pharisees could point to amidst the disciples of Jesus. These were the sinners, the tax collectors, the wrestling promoters and reality TV oddballs of the age. By contrast the Pharisees were the denizens of CNN, Harvard and Google. They talked a good game of righteousness. But when Jesus called on people to serve the least among them, which one went to the vineyard?

I ask the same question today.

Jason Jones is a senior contributor to The Stream. He is a film producer, author, activist and human rights worker. You can follow him @JasonJonesShow. He is co-author with John Zmirak of The Race to Save Our Century, and of “God, Guns & the Government.” Mr. Jones is a member of the Catholics for Trump advisory board.