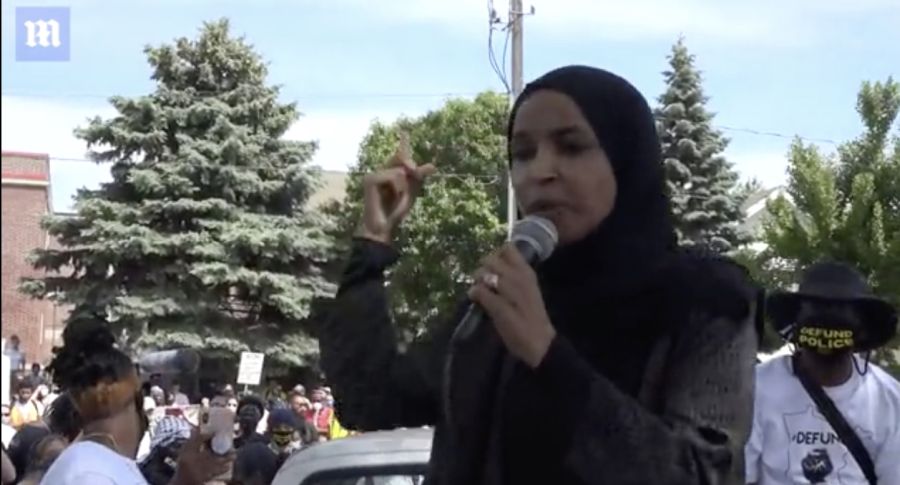 Rep. Ilhan Omar calling for the defunding and dismantling of the Minneapolis Police Department at a George Floyd rally, Saturday, June 6, 2020.

I have some good news for you. You can stand against racial inequality without embracing the entire platform of Black Lives Matter. You can oppose racism without making Al Sharpton your spokesman. You can decry police brutality without calling for the defunding of the police. You can stand for what is right while rejecting what you feel is wrong. Put another way, there’s no reason to let the extreme voices push you way from the real issues.

An increasing number of conservatives (including prominent white conservatives) recognize that something is broken in our American system. They understand that something is deeply wrong, and they want to right that wrong. But how? What will it take? What questions need to be asked in order to come up with the right answers?

Then they hear some radical leftist voice on cable TV, allegedly speaking for the oppressed classes of America. Or they listen to a speech delivered by an extremist leader from Black Lives Matter. Or they read some inane, mindless tweet from a woke Hollywood celebrity, and they recoil.

That’s why, on August 31, 2016 I wrote the article, “Separating the Value of Black Lives From the Black Lives Matter Movement.”

And I started by saying, “Did you know that if you support the Black Lives Matter movement — as in the official, BlackLivesMatter.com website — you are not only standing with black Americans but also standing with a radical social agenda including queer and transgender activism along with the disrupting of the nuclear family?”

Obviously, this radical social agenda is totally off-putting to conservatives, and if standing with black Americans means standing with Black Lives Matter, then we have a problem.

And so I wrote that 2016 article “with the goal of standing with my African-American brothers and sisters for true and full equality in America while encouraging them to distance themselves from leaders and movements who do as much harm (if not much more harm) than good.”

In the same way, you can stand against systemic racial inequality in America without embracing critical race theory or intersectionality.

Is There Systemic Injustice?

Other conservatives, however, are troubled by the facts — at least, as they understand the facts.

They will point to articles by Ben Shapiro, an Orthodox Jew, and Matt Walsh, a conservative Catholic, questioning whether there is systemic injustice in America and whether blacks are hunted down by cops.

They will point to well-researched books like Heather Mac Donald’s The War on Cops and say, “A higher percentage of whites are killed each year by cops than blacks.”

So, these same conservatives, who want to be sympathetic to the plight of their black fellow-Americans, are afraid that they are getting duped by the leftwing media. They feel terrible about the killing of George Floyd. But they agree with Rush Limbaugh’s claim during an interview on Charlemagne tha God’s show that if Floyd had been a white man killed by a cop, no one would have noticed.

Ask Yourselves These Questions

To my fellow-conservatives stuck in this place today, wanting to do what is right but not wanting to be a tool of a radical leftist agenda, ask yourself these questions.

First, do you believe that millions of black Americans have also bought into a lie about systemic injustice? That their anger and pain and frustration are manufactured? That they have all tacitly agreed on the same false narrative?

Really now, do you honestly think they have they all been brainwashed? Do you genuinely think they are making all this up?

Second, do you agree that most people tend to perceive things through the lens of their own experience? So, if my childhood and upbringing was blissful and secure, I tend to assume that this was the experience of others (until I find out that this was not the case with everyone). In that light, can you see how Drew Brees’ perception of the American flag is different than the perception of some of his black teammates?

Fellow New Orleans Saint Malcolm Jenkins explained that when his grandfathers returned from serving in World War II, they were not greeted as heroes, the way Brees’s grandfathers were. They had to return to a segregated country where they could get into trouble for wearing their military uniforms in public. (For Jenkins’s positive response to Brees’s apology, see here.)

Moreover, African American workers are three times more likely to be unemployed than white workers (15.3% and 5.1%, respectively), and a full 71% of African-American households are liquid asset poor, meaning they lack the savings necessary to live above the poverty level for just three months if they lose a job, face a medical crisis or suffer another income disruption.”

I am neither an economist nor a sociologist, and I have never investigated the root causes of these large disparities. But I don’t have to buy into all the talking points about “white supremacy” or “white privilege” to agree that something is terribly wrong with this picture. And, as a follower of Jesus who believes that racism is sinful and that the gospel brings a message of reconciliation, I must be determined to pursue justice while ignoring the radical voices.

Pursuing Justice With My Own Voice

The fact is, we do this all the time with causes that are important to us.

If we support President Trump but his son Donald Jr. posts a mean-spirited, juvenile tweet, we say, “I didn’t vote for Donald Jr.”

If the president himself says something we find offensive, we reply, “I don’t like that either, but I appreciate all the good he is doing.”

Why, then, can’t we do the same when it comes to issues of racial equality in America?

Calling for social justice is good. Calling for the defunding of the police is not.

Peaceful protests can be important vehicles of social change. Rioting and looting and vandalizing cannot.

Al Sharpton may speak for others. He doesn’t speak for me.

At the same time, I will not be silent. You better believe I will speak for myself.