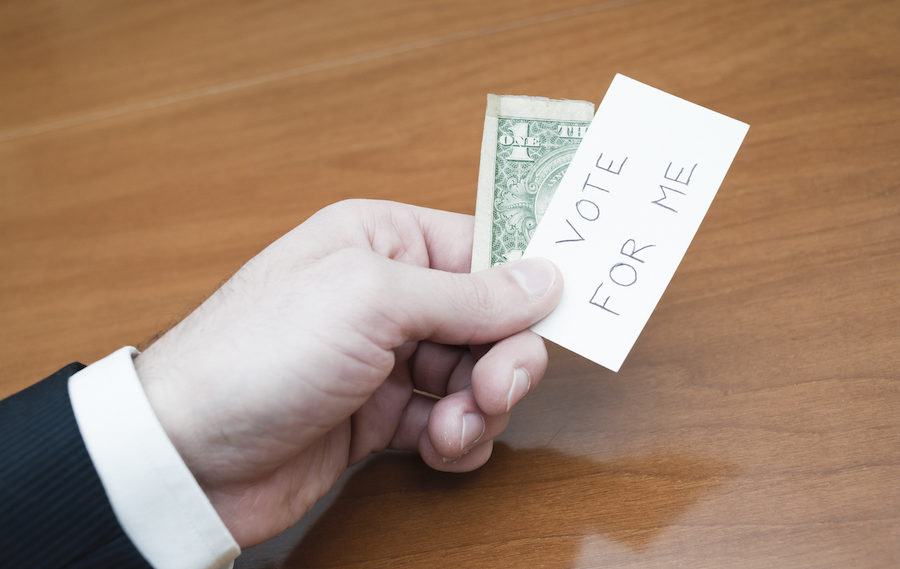 Democrats are pushing hard to transform American elections. To do them completely by mail. They claim that it’s necessary for social distancing. (Meanwhile, they want liquor stores and pot dispensaries open.) Some blue state officials are mailing ballots directly to registered voters even though they haven’t requested them. Meanwhile, Democrats poo-poo vote fraud as a racist GOP myth.

In fact, voting by mail yields the most common type of voter fraud. And Democrats want to make it worse. No surprise, since they’re so practiced at it.

In Philadelphia, a former judge of elections and Democratic committeeperson from South Philadelphia accepted bribes from a paid political consultant to add votes for three Democrats running for judge.

In Philadelphia, a former judge of elections and Democratic committeeman from South Philadelphia accepted bribes from a paid political consultant. Why? To add votes for three Democrats running for judge. Domenick DeMuro added votes in 2014, 2015 and 2016. He added 27 in 2014, 40 in 2015 and 46 in 2016. While these sound like small numbers, they made a significant difference at that polling place. For example, in 2014, 118 votes came in there. This means over 22% of those votes were fraudulently cast.

DeMuro received $2,500 for the vote padding, plus more money to help other candidates. He pled guilty this last week. He faces up to 15 years in prison.

In Indiana, prosecutors now investigate a Democratic activist who sent out absentee voter applications with “Democrat” for party affiliation already checked. It resulted in many applications in Vanderburgh County being rejected. County Clerk Carla Hayden instructed the county Democratic Party to tell Jan Reed to stop. But she didn’t. Post-marks on applications that went out after that showed she continued doing it. Reed could face felony charges.

Paterson City Council candidate Frank Filippelli said he received calls from constituents saying their ballots were stolen out of their mailboxes.

In Paterson, N.J., we see claims that ballots were mailed in batches for the recent election. A postal worker found a huge bundle in one mailbox in Haledon. The Post Office reported it to the attorney general and the Board of Elections. We hear reports of postal workers leaving large stacks of ballots in building lobbies because the addresses proved no longer good. Paterson City Council candidate Frank Filippelli said he received calls from constituents reporting their ballots stolen out of their mailboxes.

A Passaic County spokesman said 16,747 vote-by-mail ballots came in. But the county’s official results page shows 13,557 votes counted. What happened to the 3,190 votes, 19% of the votes cast?

3,190 Fraudulent Votes Caught in One County

The Board of Elections said 800 votes would not count since they turned up in bundles. An elections spokesman said 2,390 couldn’t count because the signatures on the envelopes did not match those on file.

One of the city council races turned on just 8 votes; incumbent Shahin Khalique defeated challenger Mohammed Akhtaruzzaman. Shahin was the more conservative of the candidates. If the fraudulent ballots had counted, would the more liberal Akhtaruzzaman have won?

“There is a genuine absentee ballot fraud scandal going on in Paterson,” said election law expert and University of California-Irvine School of Law professor Rick Hasen. The election was completely conducted by mail.

Voters in Wisconsin and other states got caught voting twice during the fall election. The Wisconsin Election Commission just released the list of counties where 43 of the instances took place. Most of them involved mail-in ballots. Those accused voted by mail or in person in two different states.

Some South Carolina ballots ended up in Maryland this past week. About 20 absentee ballots from Charleston County showed up out of state. Election officials blame it on the printer, and admitted to previous problems with the company in the past. And that wasn’t all. Some voters in Greenville County received the wrong ballots for the Democratic presidential primary and a special sheriff’s election, held 10 days apart. Voters in Charleston received ballots misfolded so they couldn’t be properly scanned by machines.

The Heritage Foundation continues to add verified instances of voter fraud to its database. As of May 10, it was up to 1,285 incidents.

We should worry about the upcoming presidential election. Expect more voter fraud in swing states, since those prove the easiest to tip with fraudulent votes. Watch Arizona in particular, since it has had generous vote-by-mail provisions for years. Around 75% of Arizona voters vote by mail. The other swing states average around only 25%.

Accusations of voter fraud emerged in Arizona in the 2018 election, when many Democrats won surprise victories. More mail-in ballots got cast before Election Day in 2018 than the total number of voters who cast ballots in 2014. This doesn’t seem plausible.

The office of the Maricopa County Recorder, which governs elections, recently switched to the Democratic Party. Adrian Fontes opened up five “emergency voting” locations in the days leading up to the 2018 general election, all in highly Democratic areas like Tolleson.

The record shows that Democrats continue to commit voter fraud and engage in tactics like Fontes’s. We shouldn’t make things easier for them.