Trump was the builder, not the brawler. Biden was bitter and off-base. 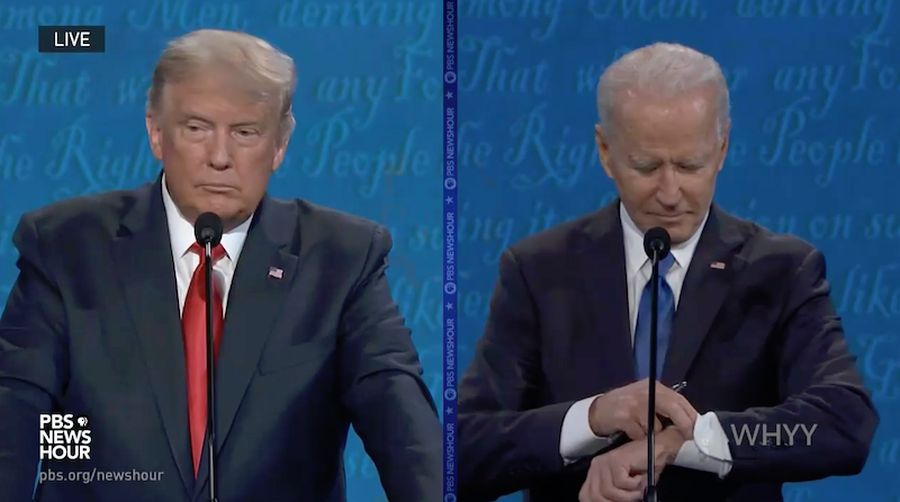 Here’s a quick list of a dozen bad moments for Joe.

#FACT: The Obama/Biden Administration built the “cages” at the southern border. 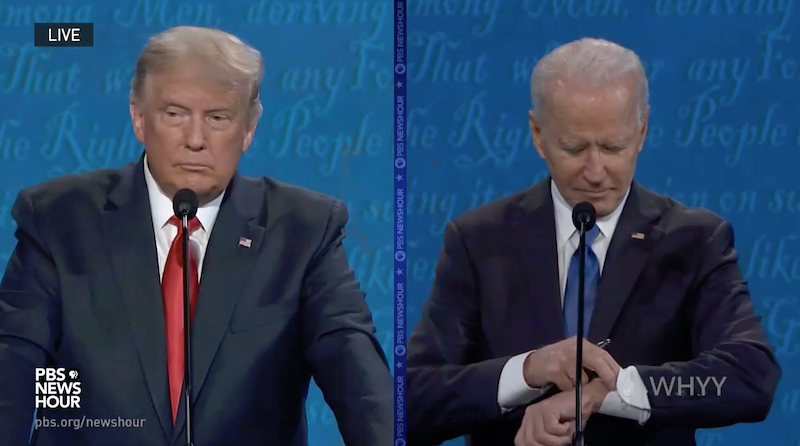 George W. Bush was hammered in 1992 for looking at his watch during a debate with Bill Clinton. Will Biden? After all, where does Joe have to go, but to sleep and back into the basement.

Biden was also angry and grew angrier as the night went on. Where’s nice Uncle Joe? He’s gone. When Donald Trump is the calmest person on stage, you have got a problem.

Joe also talked about character, on a night when his former business partner exposed him as a liar and on the take from China.

Moderator Keeps Moving Away from Elephant in the Room: Biden Family Corruption

Bobulinski said, and provided documentary evidence, that Joe Biden was neck deep in his son’s business dealings. That he was warned to never mention Joe’s involvement, unless “face-to-face.”

Bobulinski also revealed the Chinese gave the “Biden Family” a $5 million no-interest forgivable loan, which Biden soon moved ($4.8 million) to a Delaware company. Bobulinski is convinced the Chinese were dealing with the Bidens solely for political influence.

Joe’s answer was “I have not taken a single penny from any foreign source whatsoever.”

Remember, his previous story is that he’s never talked about or had anything to do with the business activities of his son or brother. That’s now out the window. But will he be called out on it by the media? (Besides, did Biden benefit from the $4.8 million in the Delaware account? Does that count as a foreign source?)

Biden said, vaguely, the allegations are “not true,” and blamed Russia for the whole scandal. The DNI, the FBI, DOJ … to say nothing of his own business partner in a China deal … say that is nonsense.

On his son’s Burisma dealings, Biden claimed that “nobody’s ever said he did anything wrong.” Uh, countless Democratic witnesses during the impeachment said Hunter’s gig was improper or gave the appearance of impropriety.

Notice Joe Biden did not say that the emails on Hunter Biden’s laptop are fake. Or the other emails and texts that have been released, including ones specifically mentioning him, are fake.

His answer was to talk about Donald Trump’s taxes.

Trump responded, stating how he has paid millions in advance taxes for the years Joe was talking about. Then he spoke of Mueller and his team of Trump haters. “They spent $48 million investigating President Trump and found nothing. I guarantee you I could spend $1 million and find plenty wrong with you, Joe.”

While Donald Trump was his typical upbeat self, celebrating our economic recovery and our advances on COVID, and dropping death rates, Joe was gloom and doom. “We are about to go into a dark winter,” he warned.

With that kind of depressing outlook, you didn’t need the “Come on” debate watching drinking game to want to chug a flask.

America, even if we were to have a “dark winter,” God forbid, whom would you want to lead us through it? The one standing up, insisting we’re going to make it to Spring, or the fearful one curled in his basement preaching despair?

For most of the 96 minute debate, Donald Trump was cool, in control and in command. Despite being interrupted 48 times by Welker, Trump shrugged it off. As aggressive as Joe Biden was, Trump was laid back and relaxed.

Given that the categories and the questions were slanted to Biden’s advantage … big surprise … Trump still scored at will.

His big theme of the night was “You were in Washington 47 years, 8 years as Vice President, ‘why didn’t you get any of this stuff done?” As he said at one point, “All talk and no action, just like a politician.”

When Biden started talking about family separations at the border, Trump reminded voters how many children are smuggled across the border by non-parents, in fact often by sex traffickers. He defended ending “catch and release.”

And he hit Biden, “Who built the cages Joe Biden? You built them. We took them down.”

Trump was eloquent about how lockdowns have destroyed his beloved New York. Passionate about all he has done for the black community. Proud of our reduction in carbon emissions.

And he was quick-witted. “I don’t know where he comes from,” snapped Biden. “Queens,” replied Trump.

Did the Debate Impact the Race?

Two days ago, I offered the possibility the stars were aligning against Joe Biden in a such a way that tonight’s debate could end his candidacy. And that would have happened, had we had a moderator that acted like a journalist rather than the left guard for an aging quarterback.

Unfortunately, Welker was happy to let Biden blame Russia, Russia, Russia and turn to Trump’s taxes. And whenever Trump tried to return to the issue — an issue of national security and potential criminality — Welker cut him off.

As a result, Joe Biden’s campaign was not ended tonight.

However, the scandal is not going to go away. By insisting he’s “never earned a penny” from a foreign source, when a former business partner is saying the exact opposite, Biden’s opened a wide door of trouble. One that’ll only get worse, once the evidence spreads. Nobody, nobody can listen to Bobulinski, look at the emails and texts that are emerging and believe that Joe Biden wasn’t “the chairman” of Biden, Inc. And Biden, Inc., was doing business with Communist China while he was VP.

Even Putting the Scandals Aside

Scandals aside, Biden did very serious damage to himself tonight. His pledge to end the oil industry will wreck him in oil producing states. His prediction of a “dark winter” compared to Trump’s sunny “we’ve got this” will turn off those wearying of lockdowns and Democratic and media scare tactics. Clips demonstrating his easily disproven lies will be passed around Twitter. And Trump’s right. Why didn’t Joe do any of his glorious proposals when he had the power?

As for Donald Trump, he did the one thing that a large swath of Americans has long begged him to do: Put away the bite. Ditch the nasty. Show his kinder, calmer, thoughtful side. Tonight, Trump was the builder, not the brawler.

Donald Trump’s positive numbers will rise. Joe Biden’s going to be watching his negatives climb like a party balloon he didn’t quite remember to hold on to.

(See also my follow up article on the debate: “Foreign Policy? What Foreign Policy? Debate Commission Props Up Biden, Fails Americans by Steering Clear of His Vulnerabilities“)