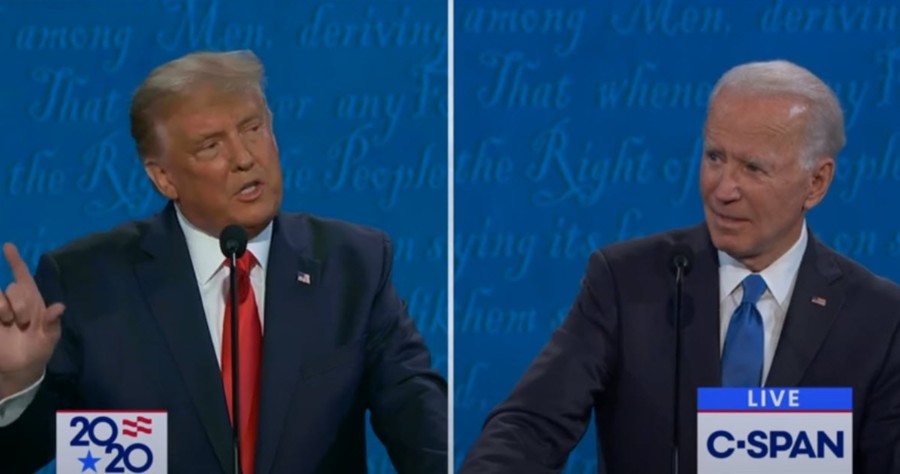 Hate to drop a pop quiz on you on a Friday morning, but quick:

What is the greatest responsibility of the President of the United States?

To serve as Commander-in-Chief and Leader of the Free World.

What topic was deliberately avoided during last night’s final debate, which final debates traditionally focus on?

Foreign policy and the candidates’ respective records in those areas.

Gee, I wonder why?

More than repeating the first debate’s emphasis on areas friendly to Biden, however, and more than merely assuming the liberal mindset, the moderator and Commission on Presidential Debates social-distanced from foreign policy. They shielded Biden that way, and kept Trump from being able to trumpet his successes.

Remember what Obama Secretary of Defense Robert Gates said of Biden? “He’s been wrong on almost every foreign policy issue” of the past 50 years. And foreign policy was supposed to be his strength.

What They Were Not Asked About

Just look at this list of topics that used to matter. But were generally ignored.

We still have troops in harm’s way. Biden voted for the wars and sent our troops there. And despite their promises, Obama-Biden kept them there (with terrible rules of engagement).

The Biden family sure did profit from the war, though. How about that $1.5 billion construction contract Joe’s non-builder brother James got in Iraq, back when Joe was overseeing rebuilding?

President Trump is getting our troops home. He’s helped ignite peace talks between the Taliban and Afghan government. And when there’s trouble, he lets our military do what they were trained to do.

The Obama-Biden administration gifted Iran billions, gave Iran an easy path to a nuclear bomb, and allowed Iranian-backed terrorist group Hezbollah to run drugs into our country. They screwed over Israel at every turn, and retreated from Obama’s red line in Syria, which allowed Russia to regain power in the region. They cut loose the secular Egyptian government for one run by the Muslim Brotherhood, and let Libya be overthrown — bringing back African slave trade in the process.

Trump only gave us the Abraham Accords, in which three former Arab enemies of Israel made historic peace deals, with others on the way. (Sudan reportedly is next.)

Trump is helping settle a festering water border dispute between Israel and Lebanon as we speak. He’s quietly fostered more trade and interaction between Israel and the Arab world. Saudi Arabia, for example, now allows Israeli commercial planes to fly over its territory. He moved the U.S. Embassy to Jerusalem.

And rather than coddle Iran, Trump killed its terrorist general who’d been responsible for the death of hundreds of America soldiers and mayhem across the Middle East and beyond. (Joe Biden criticized the killing of General Qasem Soleimani.)

Donald Trump obliterated ISIS. Four years ago, ISIS had established a caliphate and was committing atrocities on an unimaginable scale all around the world. It was exterminating Christian communities and anyone else in its way. Its followers were committing acts of terror here in America on a regular basis.

Nobody’s even talking about ISIS anymore. That’s how thoroughly Trump has taken care of the problem — one that had dominated the news before his election. It’s how well he’s kept radical Islamist terrorism from our shores. Trump wiped out the ISIS caliphate. Killed the leader of ISIS.

And where did ISIS come from? From Obama and Biden’s too quick removal of troops from Iraq, and dismissing them as the JV team at the beginning of their murderous run. (We also don’t know just how much of the weaponry they used was from weaponry Obama-Biden-Clinton sent to radical Islamists in Libya, then into Syria.)

Donald Trump has rebuilt the military and reformed the disastrous VA hospital system.

Under Biden’s watch the military deteriorated, and the VA was killing off our veterans through incompetence and mismanagement that Obama-Biden let fester.

Donald Trump is bringing our troops home from around the world.

And while he has been lethal when necessary, Donald Trump is the first president since Ronald Reagan not to get us in a war.

There was a brief exchange on China, but no serious discussion of China’s growing menace.

Trump has been focused on it. In fact, one of Susan Rice’s complaints was that the incoming administration was more concerned about China than Russia, Russia, Russia.

Joe Biden, of course, denied during the campaign that China is a rival. He has been perfectly happy accommodating China. Shipping jobs to China. And now we know, personally cashing in on China.

And though moderator Welker kept interrupting Trump’s efforts to talk about it, the evidence released yesterday by Biden’s former partner on a Chinese deal raises serious questions about whether Joe Biden has been compromised by China.

Finally, there was no question asked about the candidates’ overall view of America’s relationship to the world.

Joe Biden’s helped peddle Obama’s globalist vision, his leading from behind, his apologizing for America. The weakening of America’s position. The opening of our borders.

Donald Trump’s view is to put America first. He sees his job as representing and fighting for Americans. That includes renegotiating trade deals, squeezing NATO for the money they owe, rescuing American hostages, securing our border, reforming the immigration system so it works for America, ridding the country of criminal illegal immigrants and fighting against sanctuary cities.

Here’s Why They Had to Avoid Bringing Up These Issues

But now we know why the debate commission and moderators avoided these crucial topics. Because on the chief function of our Chief Executive and Commander-in-Chief, Donald Trump cleans Joe Biden’s clock.

And no way did they want to remind American voters of that.

On doing right by the American people, they failed the test.

(If you haven’t yet, be sure to read my first response to last night’s debate: “Trump Keeps Cool, Biden Kills Oil Industry, Moderator Shoves Chinese Elephant Out of Room.”)