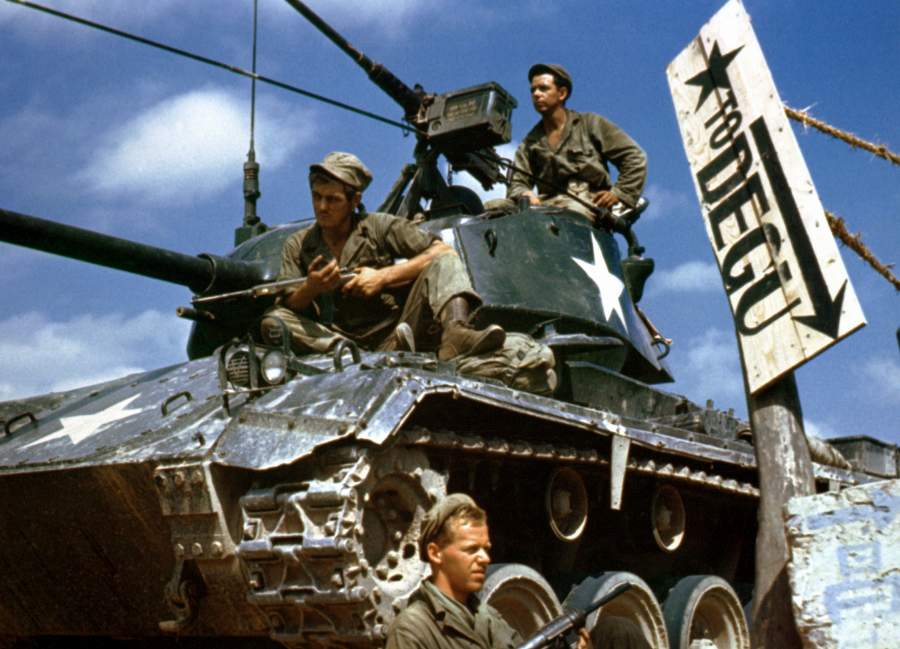 I hope I’m not wearing my readers out. I have written here over and over about the ongoing scandal of governors who keep dumping virus patients on nursing homes. That includes VA hospitals, which house our most fragile veterans. The brave souls whom we remember alongside their fallen comrades every Memorial Day.

Check out this moving tribute to veterans who died of COVID-19, performed by a solitary New Jersey Boy Scout. Outside one of those homes, he appeared and played “Taps” for the fallen.

In most of our largest blue states, the culling is still in progress. It haunts me.

That policy began as a desperate mistake. One born of panic at the predictions of a huge wave of young, taxpaying patients set to inundate our hospitals. Infecting the old to spare the young was always cynically cruel, but at least there was some flimsy excuse.

With hospitals largely empty, what excuse do we have now?

I spent many hours last year learning about America’s “forgotten war” in Korea. There’s a fascinating podcast called “When Diplomacy Fails,” put out by an Irish historian. I listened to all 49 episodes, which went in minute depth into the background of that conflict, and the awful suffering inflicted by Communist invaders on South Korean civilians. Then the fierce courage of the American-led U.N. force that repelled that invasion. They almost liberated the North from a Stalinist regime. It was only the mass influx of Red Chinese troops that won back the North for Communism, fighting us to a standstill.

Today, on Memorial Day, in light of our blue state governors’ callous disdain of our veterans, I can’t fend off some sober reflections.

And today, on Memorial Day, in light of our blue state governors’ callous disdain of our veterans, I can’t fend off some sober reflections. Learning about the abandonment of fragile Americans in nursing homes, I’ve resolved to do my part. Once it’s safe and they can have visitors, I want to volunteer in such nursing homes, visit people, read them books, and hear their stories.

And that led me to thinking. What if I encountered a veteran of the bitter Korean war whose memory for recent events was fading? How would I explain to him what’s going on right now? Would he likely understand? Would it just be cruel to tell him? If he really insisted, really wanted me to catch him up with America 2020, I’d have to find some tactful but truthful way to answer his questions.

Let’s call this former U.S. Army Sargent “Luigi Moscato.” His family left fascist Italy for Brooklyn in 1938, when that nation allied with Hitler. Having just missed World War II, Luigi was drafted and sent to Korea in 1950. That was just in time to serve in Gen. Douglas McCarthur’s devastating Inchon invasion. That operation almost freed the entire peninsula. But its gains quickly turned into losses when Mao Zedong sent hundreds of thousands of Chinese Communist “volunteers” into Korea, pushing the UN forces back to the 38th Parallel. Moscato froze and nearly starved during bitter Korean winters. He wasn’t sent home till 1953, when the UN signed an inconclusive armistice with the North Korean regime. The Cold War raged on and on, till 1990. In Korea, it still drags on today.

LUIGI MOSCATO: There used to be quite a few of us Korea vets around this place. Now I don’t see them anymore.

JOHN ZMIRAK: Seven of your comrades used to be here. Till April 2020.

LUIGI: What happened to them?

JOHN: They died of a virus. From China.

LUIGI: Ain’t that ironic. They dodged all those PLA bullets, got all the way home here, just to take Chinese bullets in the end. What a world. So this Chinese Virus … .

JOHN: We’re not allowed to call it that. The media say it’s “racist.”

LUIGI: That’s ridiculous. Who says that? What, did the Chinese buy up the stations and papers or something?

JOHN: In some cases, yes. For the rest, they’re afraid that the Chinese will boycott their corporate owners’ products.

Their Pearl Harbor, Our Surrender

LUIGI: How’d a Chinese virus get all the way over here?

JOHN: Chinese discovered the virus, and covered it up. They closed down travel inside China, but let infected people fly all over the world.

LUIGI: Holy …. That’s germ warfare. I remember when the Japs were doing that to China. I guess that’s where the Commies got the idea. So the U.S., the U.N., they’re making the Chinese pay for that, right?

JOHN: No, hardly at all. The world is terrified of them.

LUIGI: So how did that virus get all the way in here? I mean, the past few months we have been locked down really tight. My grandchildren couldn’t visit. The priest stopped coming for Mass. It was like some science fiction prison camp. Why didn’t that work?

The Democrats’ Bio-War Against the Elderly

JOHN: Because the governor forced all the nursing homes and VA homes to take in patients with the virus.

LUIGI: That’s crazy! Send people with some killer disease to get all of us sick? To kill us? Why? Can you explain that to me, young man?

JOHN: Well, the experts on television kept warning that tens of thousands of young people would end up in the hospitals on ventilators. So these governors decided to make room for them, by offloading virus patients … at places like this.

LUIGI: That makes no sense. Couldn’t they use … navy ships, field hospitals, any place else?

JOHN: They had all those things. They never used them. And they never got overwhelmed at hospitals either. But still, they sent sick people … here.

LUIGI: Why? For what possible reason?

JOHN: I don’t have a good answer.

LUIGI: The Democrats did this? To us? I was always a Democrat, till the 1980s. My parents voted Democrat their whole lives. What did we ever do to them?

JOHN: Some of their party’s leaders don’t think anybody should live past 75. Even though their candidate, Joe Biden, is older than that. And not really lucid anymore.

LUIGI: Are people out protesting in the streets?

JOHN: In a lot of states that’s illegal now. The churches are closed, and so are most of the businesses. They won’t even let people go visit their families. Because of the virus from China. Now China’s using the crisis to crush Hong Kong and threaten India.

LUIGI: What? So now we’re like North Korea. …What the hell did we fight for?
[pause]
But they’re gonna get voted out, right?

JOHN: So far, the Democrats are ahead.

LUIGI: But old people vote. We won’t put up with this.

JOHN: For some reason seniors are heavily backing the Democrats.

LUIGI: Even though they did this?

JOHN: And still are doing it, in states across the country.

LUIGI: What do we have, a national death wish?

At that point, I wouldn’t really have the heart to answer him.