The Stream is praying for American service members and military families doing their part to fight COVID-19 at home and abroad. 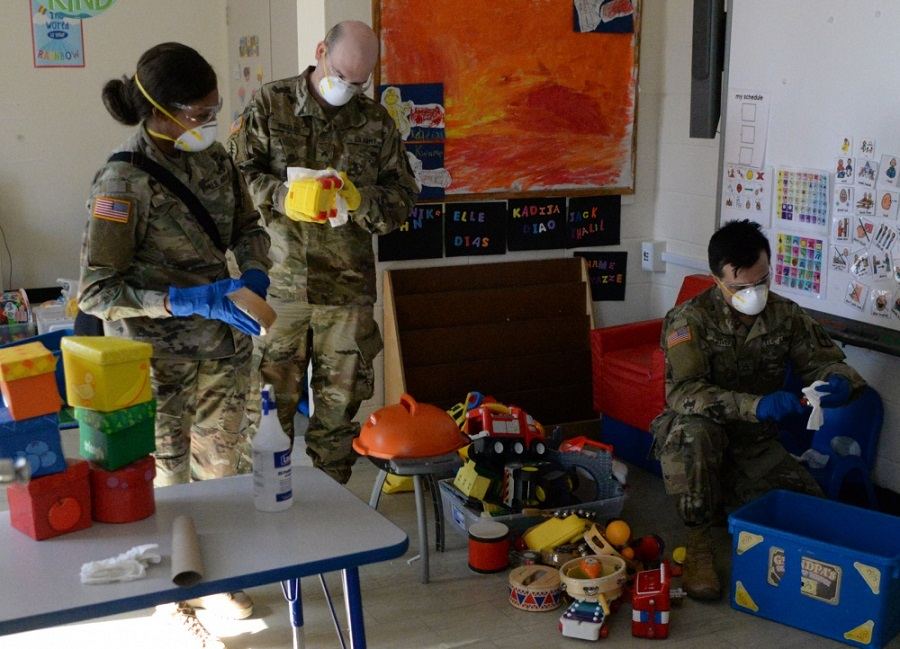 Even while continuing the fight against terrorism overseas, the United States military has a new enemy: the novel coronavirus, or COVID-19.

As of Tuesday morning, 1,560 members of the National Guard were on duty to help state and local officials battle the new disease, which has already severely altered the lives of most Americans.

“We’re here screening the community, trying to keep the community safe and trying to stop the spread of the virus,” U.S. Army Pfc. Justin Zammit said in New Rochelle, New York, one of the country’s hardest hit areas.

While most of the newly activated National Guardsmen are from New York, 21 additional states have called up members of the National Guard for the specific purpose of battling coronavirus, according to the military. More states are expected to do the same as the crisis deepens.

“We’re just here to help out, hand out food and make sure everybody feels comfortable and safe,” said U.S. Army Sgt. Corey Smith.

As of Tuesday, 42 U.S. service members around the world had tested positive for COVID-19, according to new Department of Defense statistics shared with reporters.

14 military labs are up and running.
Only 14,500 tests are available right now.
The US military has a maximum capacity to test 4,263/day. Only 495 people tested so far.

Defense Secretary Mark Esper, who is working separately from his Pentagon deputy as a precaution, has already banned all non-essential domestic travel for U.S. troops, Pentagon employees and their loved ones until at least May 11. This new rule is already having a severe impact on many military families as they try to stay together during a time of crisis.

What about the thousands of U.S. troops overseas? Service members who are coming home from high-risk areas are being isolated for 14 days, according to Stars and Stripes. Over the weekend, the newspaper reported that 300 U.S. Army paratroopers were immediately quarantined after returning from a deployment to Afghanistan.

It’s hard to imagine how eager these warriors are to see their loved ones after serving in a war zone for nine months. Our troops and their families sacrifice so much for the rest of us, especially in times of fear and uncertainty.

Four American heroes died last week while battling ISIS and other terrorists in Iraq, which is now in a state of emergency due to coronavirus. The country’s border with Iran has also become a major hotspot as the Islamic Republic continues to be one of the countries hardest hit by COVID-19.

In Europe, where tens of thousands of U.S. troops are stationed, American bases in coronavirus-devastated Italy have been locked down and about 100 troops have been quarantined so far in Germany, according to Stars & Stripes. Several major training exercises have also been cancelled.

ICYMI: on Friday, Army Gen. Robert Abrams, commander of @USForcesKorea, explained preventative steps being taken at USFK to avoid the coronavirus spreading in a virtual briefing. This helps maintain the readiness of U.S. forces in the region during the outbreak of #COVID19 pic.twitter.com/dPyCUHUoIf

In South Korea, where our military also has a massive presence, U.S. service members appear to be making excellent progress against the disease, according to Task & Purpose. Since the coronavirus outbreak began there in January, just nine Americans have tested positive out of an estimated 24,000 troops and more than 30,000 family members, with all of those infected living off base, according to the website.

Pray for Our Military

It is impossible fully convey COVID-19’s rapidly evolving impact on our selfless military community in a few hundred words. One thing is clear, though: U.S. troops and their families are making major sacrifices to keep Americans as calm and safe as possible during these frightening, dangerous times. All of us at The Stream are grateful for the work of these heroes and hope you will join us in constantly praying for the safety of all U.S. service members and their loved ones.

75 years ago today, sugar was still being rationed in the United States as brave American troops fought & died in places like Iwo Jima. Proof that our great country can overcome anything. #SundayThoughts pic.twitter.com/AP0eshKcP4

As our national treasures who lived through World War II are well aware, our country and its military have been forced to overcome even greater challenges than the current coronavirus outbreak. Because of the bravery of those who volunteer to protect us, I firmly believe America will lead the way in fighting and defeating the world’s newest enemy.